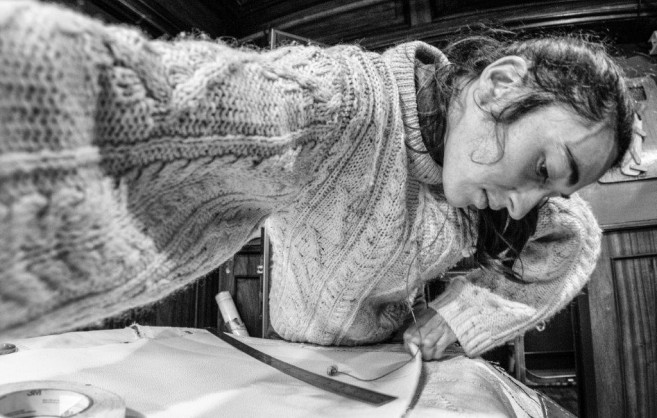 Early in the morning Europa leaves behind the Roaring 40’s and on her way South enters the 50º latitude, the so called Furious Fifties. The damage in the sails and rig suffered a couple of days ago while braving the heavy seas and powerful winds are almost all fixed and at dawn the main upper topsail, the last bit of canvas to be replaced hangs already in its gear, ready to be set by breakfast time. With the sail ready and sheeted down, now we were able to set the remaining squares above it. The ripped one that was unbent yesterday, made its way to the ship’s library, now temporarily transformed into an improvised sailmaker room. With our course bringing us to sail practically downwind at 6 to 7kn, under a variable 20 to 30kn NNW, soon it was time to strike and furl the staysails on the main mast first and then the head rig. On this almost dead downwind course these sails are only flapping about and slowly damaging themselves. This was followed by clewing up and furling of the main course with the help of enthusiastic voyage crew members. Like this we let the airflow fill up the sails on the fore mast. The following seas made us roll during the whole day, making the steering of the ship difficult. As the swell pushes under our keel from the quarter, attention must be paid on the wheel not to run off-course. For the remaining 200nm until arriving to the South Georgia coasts, it looks like we will stay at the southwest side of a low pressure system, giving us more of those good running winds to sail all the way practically until arrival. The last 24h brought us 160nm closer to our first intended landing site.

On our way we passed by another large iceberg, leaving it 4.7nm to port, but still visible with its vertical icy walls towering over the heavy seas and showing off in the sunset light, but veiled by a thin hazy layer above the sea surface. The air and water temperatures swiftly plunged, making for cold watches and activities out on deck. In the last hours we passed from surface water temperatures around the 10º C to a cold 4.5º and even dropping to 2.8º C recorded at dusk, therefore indicating that we crossed the edge of the Antarctic Convergence Area and now we sail in what is considered the Biological Antarctic environment. The cooling effect is made patent as well in the ship’s temperatures and the amount of warm clothes and foul weather gear required to stay out on deck for a while. Far gone and packed already we left the T-shirts and shorts we all wore at the beginning of our adventure at sea, leaving land behind at the warm Uruguayan coasts. With South Georgia at hand today, it was time for the last preparations before arrival. Briefings and lectures are done, biosecurity procedures are on their way. Also on deck all takes shape for changing from sailing mode to landing mode. Both our zodiacs lay put together and inflated on the sloop deck and today their means of propulsion were installed. Some of the people on watch gave a hand hoisting and properly placing the
outboard engines on the rubber boats, being tested afterwards by our engineers Bruno and Tomas. While all this was happening out on deck, some took the large lenses to try to photograph the scarce but interesting bird-life that was flying around us. Besides the albatross and petrel species we have already spotted during the trip, today two newcomers were welcomed by the Europa crew. First a solitary Grey-headed albatross soared elegantly over the waves. At first sight those beautiful birds can be confused with Black-browed albatrosses by inexperienced eyes, but just a closer look
is necessary to realise that despite the similar size and look-alike characteristics, the Grey-headed pay tribute to their name, showing a grey coloured head and a dark beak adorned by a yellow band along the top. Less common than the former, they also nest in South Georgia and other islands close to the Antarctic Convergence. The other new sight for the trip was the Southern fulmar, a species of
petrel showing light grey coloration and darker tips of the wings with a noticeable paler patch on them. As we shorten the distance to shore, sure many more birds will show around us. South Georgia is considered a paradise for seabirds. Even more nowadays, when the Brown rats that were accidentally introduced to the island by the sealers and whalers a long time ago, have been virtually eradicated from the island. They were having a devastating effect on the nesting birds that have lived and evolved in the Antarctic area without the presence of any predatory land mammals, and during the last few years, a huge effort has been put into eradicating them completely.

Hi Jordy; Nice to read your articles!. Often I think on the wunderful trip we had and what a great guide you were and still are!