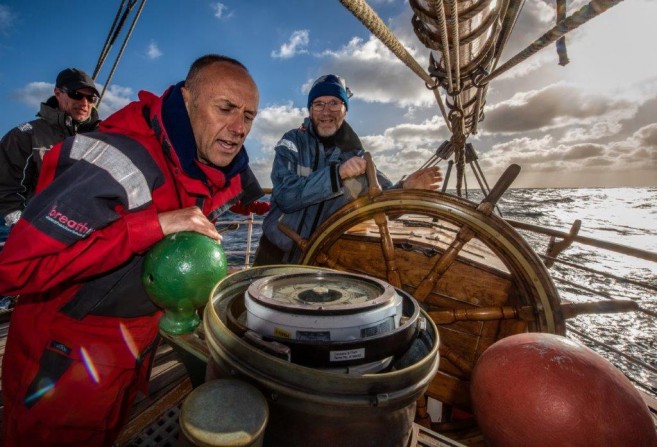 The nice sailing night ran smoothly, with the wind blowing from behind us, that made for taking away and furl the Fore Top Mast Staysail and Dekzwabber that started to get shadowed by the other sails. Also some preparations were started to get the ship ready for the forecasted wind shift, from the W-ly we had overnight is expected to back all the way to SW-ly and S.
On a good course we set all the canvas that would help us to squeeze some more speed, luckily before breakfast the large Desmond was bend on again after running through some repairs, replacing the smaller Aap. Like this we spent the night, finding ourselves at the morning change of watch sailing at about 7 to 8kn on 25kn of W-ly wind, steering 070º. Soon after, a passing squall brought a bit of wind changes, and as we wait for the flow to stabilise the wheel tries to keep a 060º course. A few minutes were enough to realise that the brief shower was associated with a sudden wind shift of several degrees. The announced change from W-ly to SW-ly was abruptly happening, signalling the time for Wearing ship. Hands are called on deck and distributed on the several manoeuvres to be done. First the Courses are clewed-up and Desmond comes down. As the wind shifts it also increases force and blows over 30kn making for striking and furling the Royals and the Mizzen Tip Mast Staysail. With people on both masts’ braces we pull them from Broad Reach Port tack to Starboard tack, followed by passing the Staysails and Head rig over the other side and re-setting the Courses. On the wheel we go back to a good 080º steering. From then on a handful of small showers bring some stronger gusts, from which we take advantage to reach 10 to 11kn of speed. Easting our way that fast, it didn’t take long to reach the position 39º 21,9’ S ; 0º 00.0’ E  making at 10:41h AM our way over the Prime Meridian under sail on fair winds. From now on we will sail on the Eastern Hemisphere of our planet.
In this modern times, just a quick look at the several GPS devices we have on board and at the simplest watch are enough to write down this data. Global Positioning Systems installed on board are enough to know and verify our whereabouts, to check and make sure of our progress and location on the surface of the earth, to plot it in a digital and paper chart. But in the past, for a long time it represented a burdensome problem to be solved. A method for finding out the Latitude through calculating the altitude of the sun or specific stars above the horizon was first developed. But still trying to obtain the specific location along the axis East-West (Longitude) represented an issue for much longer. Historically several methods were developed to try to acquire
accurate positioning with precise readings of both Latitude and Longitude, in the featureless ocean. But it was not until the invention of the marine chronometer by John Harrison in the late 18th Century that a solution was reached to correctly establish Longitude at sea. The procedure is based on specify the time difference between a determinate location and a Coordinated Universal Time (UTC), that represents the world’s standard to regulate clocks. It has been split into three versions differing between them just in milliseconds. The so called Greenwich Mean Time (GMT) corresponds with the first of those and refers to the mean solar time at the Royal Observatory in Greenwich, London, where the Prime Meridian (0º Longitude) goes through. This time, related with the precise duration of a day, has been calculated using long time sequences of data relevant to relative Earth and stars motions. Latitude has the equator as a natural setting for 0º, determined by the rotation axis of the Earth. But how to choose a natural starting position for the Longitude? All of the Meridians represent diameters of the planet as lines of the same Longitude running from North to South Poles, and are perpendicular to the Latitude circles. Therefore, a reference meridian had to be chosen as the Prime Meridian, that would represent the 0º longitude.  In the course of history different conventions had been used to establish the 0º Longitude, including the lines passing through Paris, Canary Islands, Cape Verde, Rome, Copenhagen, Washington DC and several others. The British Mathematician and Astronomer Sir George Airy already in 1851 proposed as Prime Meridian the one based on the Greenwich Royal Observatory, but it was
internationally accepted later on, in 1884 during the International Meridian Conference. There it was set that the meridian through
Greenwich, in East London was the 0º of Longitude, and the longitude of other places was to be measured as the angle east or west of it, from 0º to 180º eastward and westwards. By convention also the East longitudes were to be assigned as +, and the Western with the sign -. And thus, after this choose, in a way arbitrary, we all started to measure our East-West position in relation to Greenwich, which we sailed across in the morning.
Another taste of history and older times in navigation we got when the modern iPad (device we use to show us the steering) seem to have been overheating after being continuously plugged-in, and is in need of a rest. For the afternoon we went back to take the shifts at the wheel steering by the magnetic compass. First thing we raise is the variation of about 15º that it shows if we compare with what we were steering on the digital screen. This new devices are set to indicate the true North, as opposed to magnetic North, and they are unaffected by perturbations of the Earth's magnetic field. Magnetic compasses are very stable in areas close to the equator, but when we sail in high latitudes closer to the magnetic poles, the compass responds in a more sensitive way to crossing the planet’s magnetic field lines.

The modern navigation tools take the signal from a group of satellites that orbit the earth transmitting precise time and position information. Using distance measurements of minimum 3 satellites the GPS establishes an accurate position fix. Without a doubt, the new GPS technologies help us learning and steering on a straighter line, but they are not essential for us at the moment, finding ourselves in the middle of an Oceanic crossing. After all the days we already spent on board, is even refreshing to try some more traditional ways. Furthermore, as the saying goes: “anyone can stay on the right path, given the right tools”. And the magnetic compass has been this main tool for navigation since centuries ago. But sailors and travelers ventured the world and the seas even before compasses were invented. The early voyagers and mariners used to sail following the coasts, knowing their whereabouts by the sights of landmarks. Later on they where approximately fixing their routes in relation with the positions of sun and stars. But things started to change in the 12th Century when Chinese sailors were the ones who is thought invented the magnetic compass, placing a floating magnetised needle in a bowl of water. A new device for orientation and navigation was created, but it still took over 500 years until charts crisscrossed with lines showing latitudes and longitudes became a basic tool for the golden age of navigation to leap forward. On board Europa we mount a liquid compass in front of the wheel, where the magnetised device is submerged into fluid to protect against excessive swing, improving readability and reducing wearing. All mounted on a gimbal set. The first working models were introduced by Sir Edmund Halley in 1690, but they were improved and became usable on ships starting as late as 1813. And even it was not adopted as a standard tool aboard by the Royal Navy until 1908. As it is a magnetised device, it is affected by the surrounding metal, giving us a variation between its readings, the magnetic poles and the GPS true-north figures. Thus, they are usually located between two metal balls (green and red) and sitting on a pedestal that houses small movable magnets to counteract the effects of nearby ferrous materials, to compensate for external magnetic fields, making the compass more reliable and accurate.
Originally compasses were just pointing to markings indicating the magnetic north, but later the circumference was divided in equally spaced points, called Points of the Compass in the compass rose. In the old times, European mariner’s compass we find 32 of those points. Their names follow the nomenclature of the four cardinal directions (N,S,E,W) each at 90º of the compass rose. The next subdivision is a bisection of this 90º in a half, corresponding to the so called Intercardinal directions (NE, SE, SW, NW). Those eight directions together are called the Main Winds, and an instrument with those divisions is the one we mount on board.
Besides that divisions, in modern times the standardised system adds also the 360-degrees, where 360 equidistant points divide the compass dial.
Steering the ship with a given Compass course and using the wind to fill up our sails, does also mean to stay alert of our surroundings, not just keeping our eyes fixed on the instrument. It also involves looking for clues of the course we are on, like seeing the wind working on the sails, our relative position to clouds in the horizon or the moon and stars at night. Not all of us Master this way yet, so the iPad is back again as soon as cools down and works once more, at the end of the day, but not before we can all enjoy a nice sunset while setting the Dekzwabber and Fore Top mast Staysail, adding them to the Royals set a while ago. With this we try gaining some speed before the wind eases down according to forecast. However, before this started to happen later at night, we had a good time sailing the Europa on fair winds and good weather during the whole day. 18 to 25kn of SSW-ly winds had been giving us a speed of 8 to 9kn, making 160nm during the last 24 hours.

Sunshine had bathed rig and decks and we just experienced a moderate rolling, making for many a relaxing day on deck. That also helped for more eagerness  during  sailhandling and many also dedicate time for chilling out and get those haircuts and beard trims needed after long time on board in a rolling ship.