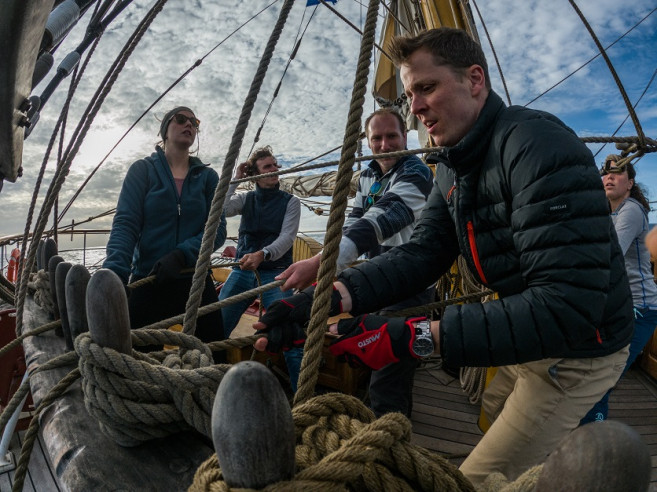 Squares up to Royals, Lower and Middle Staysails try to fill up with the 12 to 15kn of a wind that gradually has been easing, but still leaving behind big long swells that made for continuous rolling.
Several GPS devices in the wheelhouse, smartphones, or modern watches tell us about our position and progress. A quick log at them just passed 02:00 AM read:
Position 38º 52,4’ S ; 0º 00.0’ E.

Easting our way in that fashion, Europa crossed the Prime Meridian. From now on we will sail on the Eastern Hemisphere of our planet. Easy to check and keep track of nowadays, Longitude in the past represented a mariner’s problem that needed a solution. Latitude positioning was easier to acquire using celestial bodies and their relative positions to earth, but the East-West location required the invention of seaworthy clocks and chronometers. John Harrison in the late 18th Century was the one to solve this riddle, accurately being able to specify the time difference between a determinate location and a Coordinated Universal Time (UTC), which represents the world’s standard to regulate clocks.
In the present times, international agreements take as Prime Meridian (0º) the line that goes through Royal Observatory in Greenwich, London, referring to the mean solar time there. This time, related to the precise duration of a day, has been calculated using long time sequences of data relevant to relative Earth and stars' motions.

Longitude differs in the natural setting for the 0º Latitude at the Equator, determined by the rotation axis of the Earth. But choosing a starting position for the Longitude is not so straightforward. All the Meridians represent diameters of the planet as lines of the same Longitude running from North to South Poles and are perpendicular to the Latitude circles. One of them had to be chosen as the Prime one, representing the 0º longitude.
Conventions about this matter have been changing along with history, and different Meridians have been taken as such depending on the world’s political situation, amongst others the lines passing through Paris, Canary Islands, Cape Verde, Rome, Copenhagen, Washington DC. But in 1851 was proposed as Prime Meridian the one based on the Greenwich Royal Observatory by the British Mathematician and Astronomer Sir George Airy. It took another 33 years to be internationally accepted, during the International Meridian Conference.
From then on, the Longitude was to be measured as the angle east or west of it, from this 0º to 180º eastward and westwards.

From our crossing of The Line at the beginning of the day until the mid-morning, still, the wind blows at a good SW-ly 20 to 25kn, but with a tendency to ease down. Before it died later on, countless seabirds seem to know that this morning they have a good chance to follow our ship. Afterwards in the evening just some of them will be left around, while most look for windier areas or ways until it picks up again.
Wandering albatrosses, the largest aces of the windy latitudes, show up in increasing numbers. Elegant Sooties come and go, not so keen to follow ships as the big amount of Black browed that can be seen. In between Atlantic Yellow nosed soar by. Like their companions, many White chinned and Spectacled petrels. Great shearwaters also seem to enjoy the wind and waves of this area.
But veering light breeze in the afternoon made for their numbers to gradually start decreasing, as Europa’s braces are pulled squarer, goose wing the Main Course to allow some wind to pass and fill the Fore and Staysails are packed away.
The ship now runs and rolls downwind, and in an attempt to control a bit of the rolling, Main Royal Staysail is hoisted, Inner Jib sheeted in. It is not until late at night, as the new day starts, that more canvas could be set under a veering breeze.