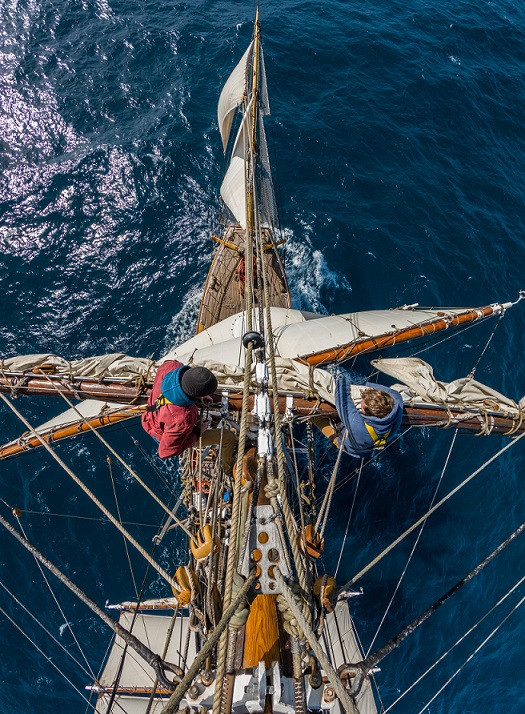 Modern, Old or Classic. Wooden or Steel hulls. Doesn’t matter too much.

When Tall ships endure the oceans for months in a row, touching land just here and there, now and then, they aim for a high degree of self-sufficiency. From canvas to wood, from ropes to steel stays; engines spare parts too, they store them from different corners on deck to the last bit of space available indoors, sharing room with food supplies, cleaning products, galley goods, clothes and tools.

Europa’s Fore Peak/Bosun store, one of the most interesting corners on board. A sort of cave all the way underneath the fore deck. There they live, amongst all the other materials, a set of spare sails to replace the ones bend-on aloft. Sometimes, like it happened today, it has to be accessed to fish up a necessary replacement.

…a treasure house of gear that enables the ship to keep the sea for months on end with no recourse to land. A dozen coils of rope, reels of wire and lengths of chain, spare blocks and sheaves and pins, shackles, thimbles, Pringles; sail twine, needles, and wax; sewing palms and flares, canvas in bolts, oddments of ironwork by the keg. Storm sails and trade-wind sails; mooring lines, hardwood, softwood, brass and galvanised rod. A bale of tarred oakum at restudy a barrel of pitch, and the tanned hide of a cow. All sorted and lashed in place.

Sails and rest of the rig often pay their toll after months dealing with all kind of oceanic conditions and days after days of heavy seas and winds. Today one of our sails high up the Fore mast seem to have had enough of it. A good look from deck revels a rip close to the Top Gallant foot. With a wind forecast still telling us about its unrest and good strength, it must be unbent and brought down to deck for repairs. During the night watch it is already exchanged by a spare one. With just the last couple of adjustments to be done, soon it could be set once more, letting the Europa to enjoy better the good backstay winds, with her braces pulled a point to Starboard tack. The variable blows between 30 to 20kn from the West fill her sails, fluctuations that make to douse and set later-on once more Royals and Top Gallants.

A busy morning aloft bending-on the sail between halyards, lashings, gaskets, crews and sheet shackles, while down below in the water and flying around us several species of the southern oceanic wildlife pay us a visit or sometimes we just seem to cross paths.

A pod of Pilot whales show up at the morning change of watch, when first coffee of the day in hand the incoming shift start showing up on deck. Fur seals pop up occasionally close to the ship, and during lunch, just at our starboardside a Southern right whale show us its round body, large back lacking dorsal fin and characteristic head. Later on a small group of Hourglass dolphins own our bow wave for a little while.

Gliding around the ship the already now familiar array of albatrosses and petrels, today joined by an inquisitive solitary Skua.

The starting of a quite fast drop on the air and surface water temperatures, sure start indicating that we approach the so called Polar Front or Antarctic Convergence Area, where the temperate waters of the Subantarctic meet with the colder water mass from the South. Those colliding water masses plus the relative proximity of land, 325nm away from the conspicuous steep group of rocky islets Shag Rocks and 450nm from South Georgia, bring changes on wildlife sightings, increase on their abundance and diversity.