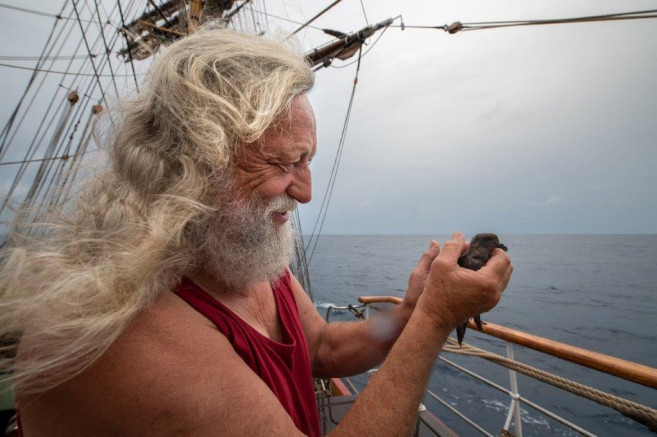 Sail handling on a variable breeze and squalls. 580 Tonnes of steel and more, 56 meters overall length, 2 masts carrying 6 square sails each, a mizzen mast with a Spanker and a Gaff Top Sail. Between them, 6 Staysails are bended-on. A steel Jib-boom flying 3 Jibs and yet another Staysail.

Fuel and water tanks, watermakers, generators, heating, and cooling systems, cooking and refrigerating facilities. Two Caterpillar engines riding 365 horsepower each, working 24/7 during the last couple of days. All needed by the old lady Europa and her crew to wander the oceans of the world, from Pole to Pole, from East to West.

Just a few grams of muscle, skin, and feathers, all packed in a seemingly fragile body less than 20 cm in length and barely 40 cm wingspan, though fitted with marvelous biological adaptations for a life dedicated to dance over the ocean surface. No more no less than what is needed by a diversity of storm petrels for survival in the world seas. Some rare species with relatively small distribution areas, others wide-ranging like the Wilson Storm petrels, trans-equatorial migrants in all oceans from Antarctica to the northern tropics, in the Atlantic even further north to the mid-latitudes of the Gulf Stream current.

Confused by floodlights and the tall rigging, sometimes can be found on deck, bewildered about what crossed their paths in the middle of the ocean. As indeed happened last night, when after a couple of hours showing auspicious SE-ly breeze, we hit a good shower bellowing worthy winds for sailing our course, accompanied by pouring rain. Deck lights are switched on and Captain decides to ride the squall going for a revitalizing sail handling night after hours and hours of motoring without any canvas set. In a quick motion, yards are braced all the way while there’s already eager crew aloft unfurling Staysails. At the same time gaskets are taken off the Jibs at the bowsprit and enthusiastic hands roam over all decks letting go downhauls, pulling hard on halyards and sheets.

People are sent back up the rig to prepare both Lower and Upper Topsails. Soon they are sheeted down and set, trying to embrace the winds blowing once again. Unfortunately, it didn’t last long, and at the end of the dog-watch all is taken in again, Outer Jib furled, letting staysails and Top Sails hanging on their gear, on yet again a windless situation. Nevertheless a thrilling night-watch for the keen sailors; impatiently looking forward to the fair winds or the chance to ride a swelling squall in the otherwise calm doldrums. Deck-lights on during the night, swinging braces, setting and dousing staysails and squares during a welcomed shower... sure all quite disconcerting for the tough little
Storm petrel that found itself amidst all the maneuvering in the otherwise solitary and ink-black ocean surface, ending up cornered in the scoopers.

Placed overnight in a quiet place, at dawn and after a good rest, it took off from the hands of the Captain, just before an SW-ly breeze of 10kn made again for the morning watch to gather on deck for sail handling. Bracing sharp to Starboard tack, middle and lower staysails are hoisted together with all the canvas we carry on the head rig. In the Mizzen mast, Spanker and Gaff Topsail are set too. But the unreliable weather of these latitudes in the ocean expanses played tricks again with us, and by lunchtime, the wind had died once more, following a similar unpredictable and inconstant pattern for the rest of the journey.