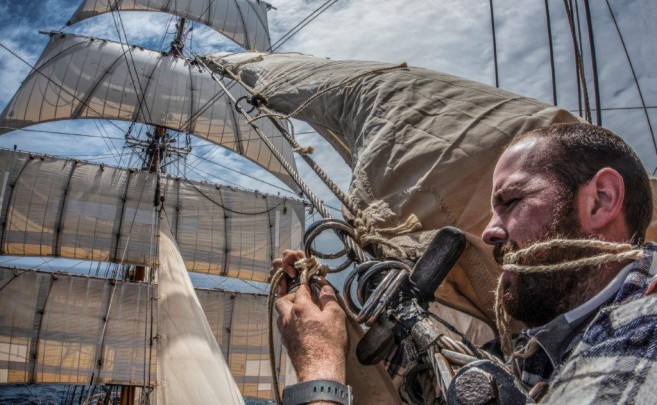 Leaving behind the mixing waters of the eddies produced by the meeting of the confronting Brazilian and Falkland currents, we sailed clear from the Argentinean Continental shelf and into the deep waters of the Argentine Basin. The calmer sea conditions and lack of oceanographic features that can produce upwelling of deeper nutrient rich waters, make for a biologically poorer oceanographic area. That we could see by the numbers of birdlife around the ship during the day. It also helped to this diminishing biodiversity the easing winds along the journey. Albatrosses and Petrels actually need stronger winds to be able to glide along the ocean surface. Lacking this stronger winds they are forced to flap their wings, which represents an increase of the energy used for flying. Under
those circumstances many prefer to sit on the water surface and wait for better windier conditions.

At dawn we still enjoyed good sailing conditions, steering the ship on a 170º course under 15 to 20kn of NNW-ly winds, conditions that prevailed until lunchtime and allowed to set a bit more canvas. The dekzwabber and spanker are set, then also the outer jib, followed by the main topgallant staysail, once the latter had been bent on its stay. Yesterday the crew had to lower it to deck, as it showed a rip after the harsh conditions suffered a couple of days ago. The crew spend a couple of hours aloft connecting, tying, fastening and getting the sail ready. Quite a hard and long process but pretty enjoyable under the good weather conditions. During the afternoon watches the wind turned more to a NW-ly direction and then W-ly, making for a bit of bracing to beam reach and a change of course, now steering on a 140º. As the hours pass by the gentle breeze decreased until the engines were started to keep a speed of about 6kn over a 155º course. The forecast indicates that this situation will stretch during the night and then, in the early hours of tomorrow, most probably we will find ourselves fighting against stronger S-ly headwinds.

The good sailing during the last 24h brought us 154nm closer to South Georgia, now having ahead 720nm until reaching the planned spot for our first landfall. But before that, and taking advantage of the better sea conditions and just under gentle rolling, today we started with the mandatory biosecurity procedures that we all have to conduct before arriving to South Georgia. Surprisingly, many spores, seeds and dirt are attached to our clothes, Velcro’s and somehow had made their way into pockets and backpacks. Our boots, pole tips and tripod feet sure also carry some of
them. South Georgia being a remote and unique location, with its combination of native and endemic plants and animal species, the idea is to keep the ecosystem as pristine and close to original as possible, minimising the introduction of any alien species that we could bring with us. For this we all have to clean and vacuum clean the outer gear that we plan to use ashore.

The other indoor activity today was rehearsed by Nilla, when she talked about the oceanography, the sea characteristics and water masses in the wold, focusing on the South Atlantic and Antarctic Ocean. Like this we all have now a clearer idea of the ocean features along the area where we sailed and where we are heading.