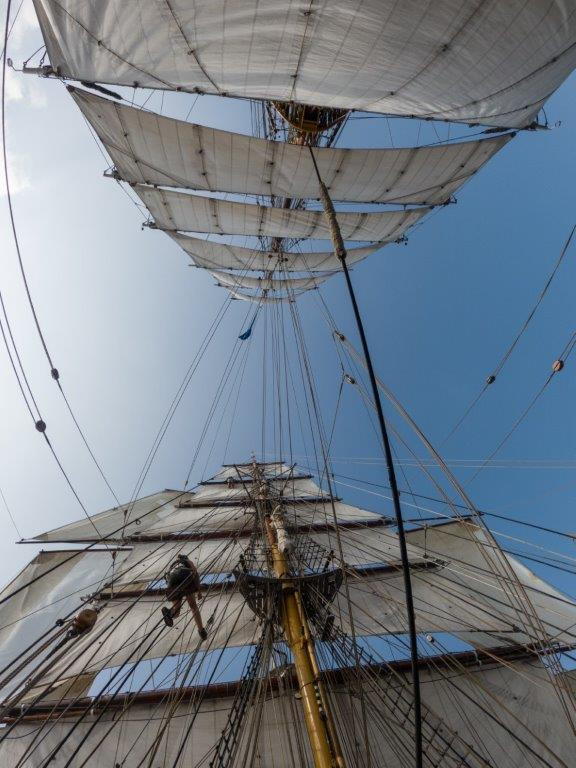 6 days at sea have brought us to sail by the Cape Verde Islands, after 842nm left behind since departure from Tenerife. By lunchtime we found ourselves gently rolling in the swell with views of imposing islands surrounding us, leaving at portside Sao Vicente Island and Santo Antaao at our starboard side.

Man landed on this chain of isolated volcanic islands already in the 15th century, since then the inhabitants have been using and taking care of its natural resources until nowadays.

Coming from the open ocean and getting through the channel separating both, course changes and variable winds made for a busy day on deck. Studding sails come down, braces have to be pulled now to one tack now on the other, Staysails hoisted and taken down again.

But before that with our speed decreasing to about 5kn, still in the darkness before the dawn of the new day, we had a good chance for taking the first night plankton trawl. Europa’s bow wave was already glittering with bioluminescence as she created water disturbance on her way, phenomenon generated by numerous species of plankton subject of study of the crew member and biologist Fran.

The area close to Cape Verde archipelago represents a good example of rich waters with great biodiversity, great chance to get a sample. Here the waters flowing along the deep sea bottom find the steep slopes of the volcanic islands on their way, ascending towards the surface loaded with nutrients and minerals. Upwelling area where phytoplankton take good care of those nutrients, offering a good base for the rest of the food-net in the water column. Furthermore, during the night the plankton conduct the greatest migration on the planet, when countless species with a high richness of individuals swim close to the surface before diving down again to deeper waters during the day. A strategy to avoid or minimise predation.

As soon as the plankton net touches the water, a fascinating glow can be seen, just what we were looking for. Untold numbers of minute light flashes caused by bioluminescent plankton, mostly dinoflagellates. But as it could be seen later, when the sample is brought on board and studied under the ultraviolet light on deck and later through microscope, a myriad of other species also produce this phenomenon. Even a fish show its photospheres, used for counter-illumination purposes, camouflaging its silhouette from below. Other evidence suggests that marine organisms use bioluminescence for defence as distraction, signalling possible threats, for finding and luring prey, and for recognising and announce to potential mates.

Bioluminescence is produced by a chemical reaction in special cells known as photocytes, usually contained within light organs called photophores. A light-producing compound called “luciferin” is oxidised with the help of an enzyme called “luciferase", releasing energy in the form of cold light. Most bioluminescent light is blue-green, but some animals can produce green, yellow or more rarely red light.

Light flashes produced inside tiny organisms by chemical reactions; high richness of the surface waters feeding them through upwelling currents; the largest migratory event occurring daily on our planet; tropical oceanic waters subjected to the East bend of the North Atlantic Gyre, related to the global patters of oceanic currents and weather. Starting at molecule to molecule chemical reactions to play the grand puzzle that governs the whole planet. And in-between, the methods to study it, the ways to represent it in a multitude of practices: from the scientific laboratories to the views through camera lenses, or pencils and brushes of painters, the confection of high end scientific papers or the typing of the story tellers. From the deterministic compartmentalisation of some of the science’s branches to a more holistic approach. A way first described and worked upon by the naturalist Alexander Von Humboldt in the mid 19th Century, master on correlating natural phenomena from micro-scale to mega-scale introducing in the equation the human perception and aesthetic view.

In considering the study of physical phenomena, not merely in its bearings on the material wants of life, but in its general influence on the intellectual advancement of mankind, we find its noblest and most important result to be a knowledge of the chain of connection, by which all natural forces are linked together, and made mutually dependent upon each other; and it is the perception of these relations that exalts our views and ennobles our enjoyments.

Alexander von Humboldt. “Cosmos: A sketch of the physical description of the Universe”