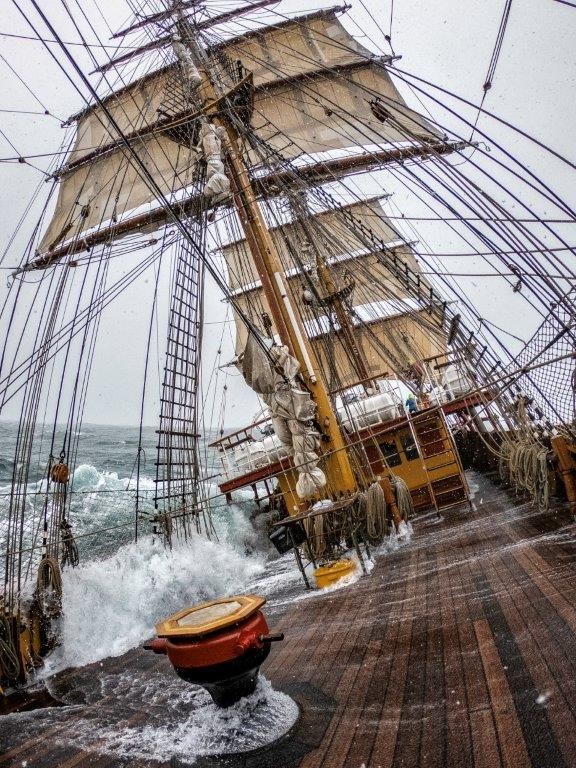 20 to 25kn of wind pull the Europa at a good pace, but as the night approaches and still with the chances of finding drifting ice on our
way,  our Mate take the precaution of starting reducing sail. First the Royals come down and are furled. And later on, experiencing 25kn blows, generally veering to a SW-ly, also the Top Gallants are clued up. Sailing practically downwind the few staysails still set are well
sheeted, but they just can hold for a while, when just the Inner Jib is left set in the bowsprit and the rest are taken down and furled.
During the whole night an ice lookout from up the mast from one of the permanent crew members is kept, together with the help of voyage crew on each side of the Fore deck. And actually some icebergs are spotted still around, with their associated growlers on streams downwind of them. Dawn brought an improvement on the weather and a morning under partially cloudy skies. The sun peers through the rig and the Europa gently rolls on the following winds and swells on the Scotia Sea. But it didn’t last long as it all quickly turned on a blustery day. First a squall line pass over our path, preceding the overcast and snowy weather that firmly installed itself for the whole journey. Soon it all comes associated with an increase on the wind that together with the reduced visibility and the chances to encounter bergy bits and growlers on our way, make for Clue up and furl the Main Course together with the Outer Jib. Nevertheless Europa keeps a good course and speed of about 7 to 8kn towards South Georgia. The growing swell and the fact that we almost run downwind made for an uncomfortable rolling day. Water soon started to keep Main deck awash, watertight doors are closed on the main accesses indoors and special care must be taken to move around the ship, change clothes, don a harness or simply look for a cup of coffee. With winds of about 30kn on our back and riding big swells, concentration is essential while steering, as it is easy to fall
off-course as the waves pass by under our quill. It looks like from now on and for the next couple of days we will be running on the western side of one of the many Low-Pressure Systems that sweep the area.  Then as it travels along the Scotia Sea and head eastwards, while in the meantime we steer on a NE-ly course, we surely will catch the northern-back flank of it. As in the Southern hemisphere they turn in a clockwise fashion, there strong Westerly winds blow, and soon are expected to hit us. For the moment we are making good progress using the fair Southerlies we are experiencing. It is common to have numerous and quite continuous Low-Pressure Systems at these high latitudes, and the sailing and routing have to be done having their patterns and circulation in mind. Having a look at the worldwide location of the different atmospheric pressure areas and systems (that at the end are the ones driving the prevailing winds) we find out that Areas of high pressure exist near latitude 30° but also at the Polar Latitudes. Then areas of Low-Pressure exist over the equator and near 60° latitude in the vicinity of the Polar Front, at the latitudes we are actually sailing now and will do during most of our trip. This belt of sub-polar latitudes is home for the Subpolar Lows, that here forms a continuous flowing channel that completely encircles the globe, driving the circulation in a West to East direction. By knowing the way the winds blow around these High and Low-Pressure atmospheric systems, we can have a general idea of worldwide surface winds: the trade winds extend from the subtropical high to the equator, the westerlies from the subtropical high to the polar front, and the polar easterlies from the poles to the polar front. Downloading daily wind forecasts, our Captain Janke and Mates Finn and Merle can discuss the proper course to take in every occasion and check the local variations every pressure-system have over those general patterns.