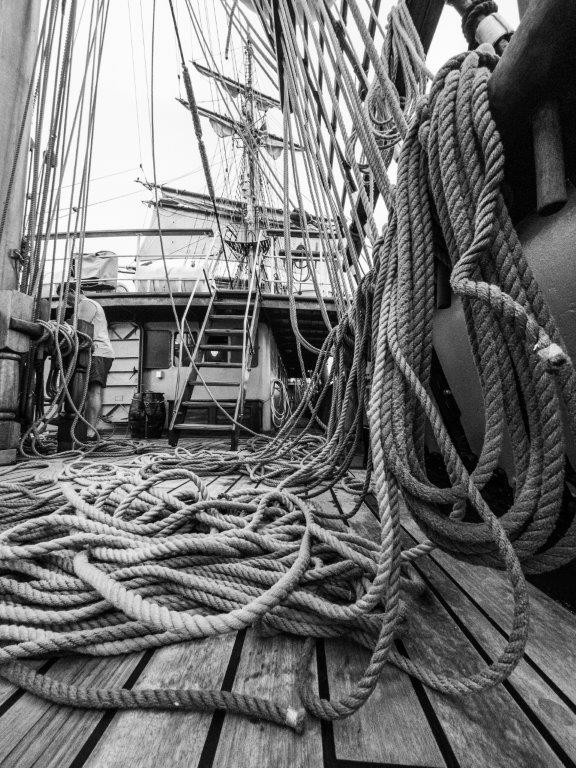 We woke up to a wet day, in contrast with the sunny journey from yesterday. Since the early hours the Europa sails into the drizzle and misty area, but still under fair winds, up and down between 18 to 26kn from the NW, pulling us at more than 7kn.
Gradually along the early morning the wind shows a tendency to back more to W-ly, and is just before breakfast when it also eases down to 15-16kn, moment for bracing squarer and reposition the Courses tacks in the whisker poles, to further stretch their canvas. Like this we sail as much as possible until the breeze just lightly blows at 5 to 8 kn on what had become a hot and sunny day. Time for our engines to roar again and for us to strike all Staysails down and clew up all squares.
Light clothes, T-shirts and swimming suits show up on deck over untanned bodies, and the smell of sunscreen overtakes the aroma from the galley delicacies being cooked and served for lunch on deck. Far gone are the good old times of heavy foul weather gear, warm rubber boots, gloves and wool underwear that made so much for us during the Southern Ocean cold nights on deck. Now instead of warming us up, they just hang hopelessly on the corridor handrails waiting to be stacked and compressed on our luggage bags that soon will be time to start preparing. Preparing our arrival to port, we all want to show up on a clean, tidy and shiny Europa. For this some effort has to be put on de-rusting some spots and clean as much of the hull as we can. Once in Cape Town, Europa will undertake a few days of her already traditional annual dry period in the city. There several cleaning, painting, rig jobs and other necessary maintenance will be done before setting sail again, heading North in the Atlantic Ocean along the African coast, towards new sailing adventures. The quiet day ended bracing slightly to Port tack on light breeze from the SW, and setting the Lower Top sails while many climb aloft to furl all the canvas that is hanging on its gear, under the setting sun now on a much more bearable cloudy and refreshing evening.

Dear Sir, Negotiation International : is a group of professional manufacturers, produce for most of the top brands around the world. We sincerely desire to induct you in the circle of our honorable customers. Our products lines include any kind of products like a Gloves, Fitness Gear, Sports Wears & many kind of products you can see on our Web : Please visit us online; http://negotiationintl.com/ or write email at info@negotiationintl.com We can manufacture all kind of custom design products up to requirements and specification demanding through designs, patterns or images. Our vast experience of manufacturing can meet your requirements through standard of quality and workmanship. We make under our customer any requisite logo as well as brand name label/logo. The best advantage, we give most competitive prices and excellent services include speedy dispatches as per the customer's requirements and time to time feedback of their order. You please contact us without any hesitation. Best Reg