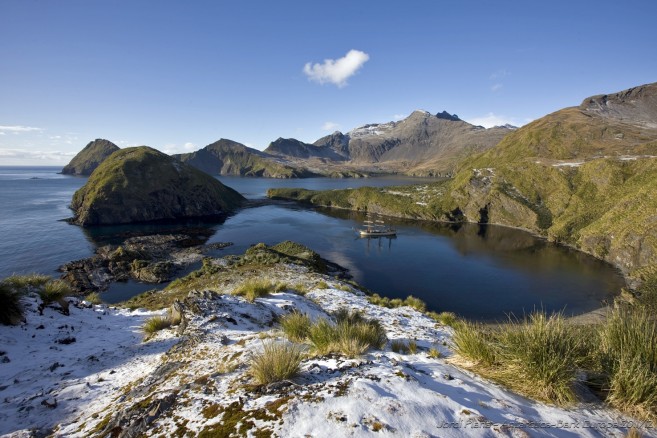 Another great day of sailing though the Scotia Sea, with quite steady Westerly winds for most of the last night and day, decreasing a bit during the afternoon.

Last night the weather gradually became better, and the wind became more W-ly, blowing around 25 knots. Time to set more canvas, Top Gallants, Outer Jib and Fore Top Mast Staysail are set, then Middle Staysails as well. We speed up to 9 knots on a 35º course towards South Georgia. After breakfast the wind blows from 20 to 24 kn, we brace a bit squarer and we start setting the rest of the sails, first the Royals, and when Jordi is repeating his second talk on Polar Ecosystems and wildlife adaptations, we also unfurl and set the Upper Staysails. The Europa rides the wind and the swell at 8.5 kn, sailing between Beam and Broad reach.

During the morning we also receive more sailing instructions, now to master the furling and unfurling techniques working on the yards aloft. Still some space to improve on those subjects, as the permanent crew let us know when they climb the rig and supervise the voyage crew. Until the afternoon we sail under full canvas, just the Spanker and Gaff Top Sail are not set. But then the wind drops to 10 kn, so does our speed, now just 4.2 kn on a 050º course. The weather has been improving as well, and at midday and in the afternoon we sail and roll under blue skies. Having these nice sailing conditions the crew takes the chance to keep going with some maintenance projects, like changing the Inner jib sheet pennants and placing some anti-chafing gear on the stays leading to the Spanker. That was also a good chance for the crew to practice a Fire drill, the first one of several drills that will take place during our trip, as mandatory monthly training.

Later on the wind comes back together with low clouds and fog, which will stay with us for the rest of the journey. By coffee time we brace sharper and we take away Royals and Upper Staysails, then the wind blows 25 to 30 knots from the NW, while the Europa speeds up to 9 kn on a 060º course. We keep this sail configuration until the night, when in increasing winds and thicker fog we sail at over 10 kn, time to take away more canvas and reduce a bit our speed, as during the last hours several growlers and small icebergs have been spotted by the lookouts, and is more comfortable to sail a couple of knots slower on that conditions. Other activities on board during the day were Aaron’s repetition of his first talk on Introduction to Navigation and afterwards, being Easter days we keep the tradition of painting boiled eggs that are brought up to the Deckhouse.

Out on deck, having a look over the swells, a couple of new species of birds have been sighted, a Blue petrel followed the ship for a while. Those birds are pretty similar to the Antarctic prions that were flying in flocks around the ship a few days ago. One of the distinctive characteristics is that the Blue petrels have a white tip of the tail, in comparison with the black one of the Antarctic prions. And for a few occasions during the day a solitary Light mantled albatross glides gracefully closeby. Those elegant albatrosses display a grey and black plumage, and they are one of the very few species of dark colours albatrosses. Sure they will became more commonly sighted as we get closer to South Georgia, being the island a main breeding area for them. During the morning the lookouts report a few dolphins bowriding the Europa as well.

We are still on cold waters of around 2ºC, south of the Antarctic Convergence area that it loops northwards engulfing South Georgia on it, and the most common species of dolphin here, besides having occasionally other species visiting those high latitudes, are the Hourglass dolphins. Typical from those cold waters and easily identifiable by their characteristic black and white colour pattern. Enjoying fair winds for all the way from Elephant Island, during the last 24 hours we have sailed 204 nm, and just 305 remaining to arrive to our first planned spot in South Georgia. At the end of the day we go to our bunks or to our watch duties, hoping for favourable winds tomorrow, and soon to arrive to South Georgia, the hidden pearl of the Southern Ocean, with its amazing landscapes and wildlife.