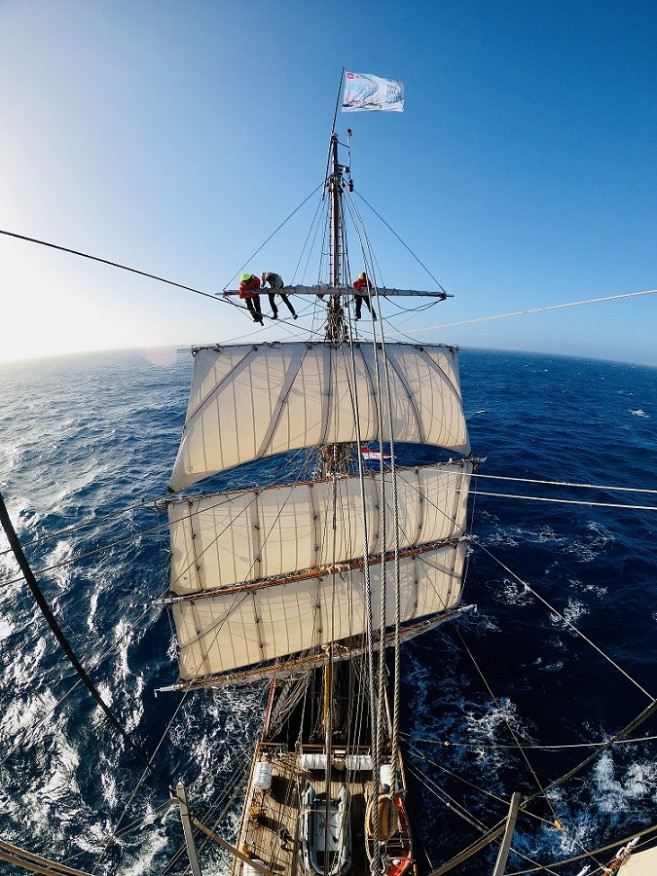 Last readings of the surface water temperature show a clear drop of several degrees. Now sailing over waters barely at 5ºC tells about the beginning of the new Europa’s adventures on Antarctic waters. She is leaving behind the relatively warmer Subantarctic ecosystem.

Along this area that stretches all around Antarctica, including South Georgia on a sort of a loop on lower latitudes, the colder and denser waters from the South, sink under the lighter Sub Antarctic ones. This oceanographic feature, known as the Polar front or Antarctic Convergence Area, it is well studied nowadays, but like many of the Antarctic exploration and discoveries it had to wait until relatively recent times to be first measured and acknowledged.

It was by 1911 when a German scientific expedition led by Wilhelm Filchner on board the ship “Deutschland” ventured into the depths of the Weddell Sea on his privately funded enterprise to determine whether West and East Antarctic were connected by land or ice. They sailed further south in the Weddell Sea than anyone else had done before, while discovering and mapping new coasts during a two year expedition. Furthermore, scientific research was an integral part of their enterprise. They conducted significant meteorological, geological and oceanographical observations. Relevant to the part of the ocean where we sail these days, Brennecke (the oceanographer on board) described four isolated water masses in the Southern Ocean, realising the particular salinity change of the north flowing waters and an associated temperature drop. He just had came across the Antarctic system boundary known today as the Antarctic Convergence.

This dynamic border between ecosystems slightly oscillates north and south as it is a contact area between flowing water masses, and can determine the diversity and abundance of some biological species. For instance, the beautiful Hourglass dolphins that were spotted yesterday and also today at the distance, use to hang around this contact zone.

This oceanic characteristics at proximity of South Georgia, also brought sightings of other island’s inhabitants such as a few of the elegant Light mantled albatrosses.

The good sailing conditions have brought us 148nm closer to our first destination of the trip. With already not many miles left to reach to South Georgia, it is time for getting into the last preparations for arrival.

Out on deck, the inflatable rubber boats, our trustful shuttles to get ashore, are being readied and put together. If lucky with the weather and swell situation along the rugged coast of the island, soon we will learn, practice and get used to embark and disembark from them, how to properly use this versatile boats that will allow our planned visits ashore.

Below decks, taking advantage too of the slightly better sea conditions, continue the mandatory biosecurity procedures to be done before arriving to the island. It is surprising what a close look at our equipment and clothing can reveal. Dirt and seeds always find a way to get into pockets, insulation, backpacks, boot soles, walking poles and tripods. Conducting this procedures we minimise the hazard of introducing alien species in the delicately balanced South Georgia Ecosystem.