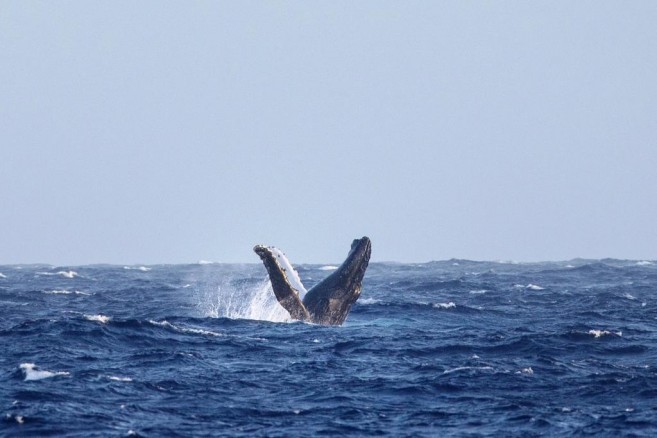 As the morning watches drink the first coffee of the day, around 07:30h, two Humpback whales are spotted 300mts from our Starboard side. Soon after one of them starts breaching several times, giving a great spectacle as we sail Southwards at around 8 knots.

These whales are also on their way to higher latitudes after spending a few months on their breeding grounds.

Global populations of Humpback whales can be separated on three big groups, the North Atlantic, North Pacific and the Southern Ocean one. If we have a closer look at the latest, we can divide this big population on several sub-populations, being the one named “A” the ones that use tropical waters around Brazil for mating and giving birth, and then migrate to Antarctic waters North of the Weddell Sea during this time of the year, towards their feeding areas. Later on, if we are lucky enough to spot some Humpbacks in Cape Horn area and the Chilean Channels, we will be seeing animals belonging to the “G” population, that use the Pacific coast of South America, breeding in Colombia, Ecuador, Panama and Costa Rica and feeding along the Western side of Antarctic Peninsula.

Today, besides catching up with those whales on their southerly migration, we also catch up with the story that brought us to do this trip: Willem Schouten and Jacob Lemaire, on their respective ships the “Eendracht” and the “Hoorn”, 400 years ago were sailing on those waters at the same latitude of 26º 45’ S that we passed during the afternoon hours. We will try to keep ahead of them on that time-race against the clock and the long ago gone Cape Horn discoverers. But as the day advances, the wind drops and backs to the North, and at dinner time we can squeeze around 5 knots of speed out of all our canvas set, including the three Studding sails set on Starboardside of the Fore Mast. And the wind continues to die during the evening and starting of the night watches, until approximately midnight.