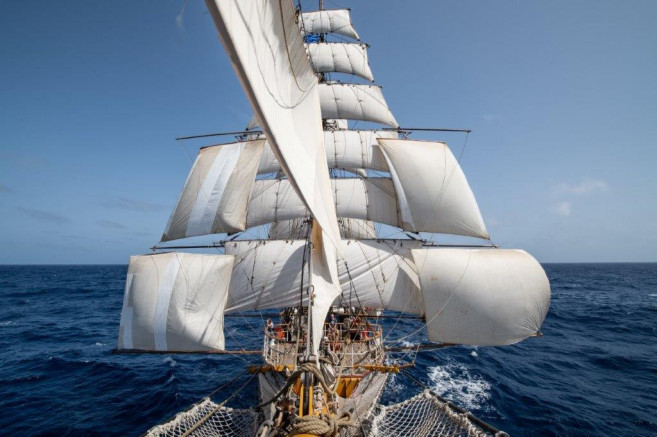 A warm and sunny day, slightly veiled by the dust blown off the Sahara desert, not far eastwards of us. Here, the northeasterly  winds often blow fine sand particles from this desert to the sea, sweeping over the Canary Islands, where the phenomenon is called “calima”. Mostly observable during the hours of the morning and evening when the sun is low in the horizon and the sky gets a particular warm tint. Passing our hands over the decks also a thin layer of deposited dust can be felt. Besides blurring the skies and blanketing all exposed surfaces, it represents an important input of minerals from the land to the sea, sure used by the planktonic life inhabiting the ocean.

Those are the prevailing winds on this oceanic area. They are produced when the heat from the sun warms the air near the equatorial belt, making it rise. Once cooled down in the upper layers of the atmosphere, it sinks down again to the surface around subtropical latitudes. Then the air moves back toward the equator. This model is affected by the earth’s rotation, that deflects the winds to the west. Producing what are known as trade winds. They comprise the northeasterly trades in the Northern Hemisphere, and southeasterly trades in the South.

Treated by nautical, historical and mythical literature alike, those Trade Winds have been a reliable companion for sailing ships venturing out to cross the world’s oceans since centuries ago.

Good and useful hints for those oceanic crossings had been already published since the end of the 18-hundreds, noting the predominant weather and currents along the year, best longitudes and latitudes to take advantage of the most fair winds to help planning routes and timings for mariners. There, those trusty Trades play an important role, together with other predominant winds around the world.

There is something all glorious and gracious in the wind. These warm Trade Winds, at least, that in clear heavens blow straight on, in strong and steadfast vigorous mildness; and veer not from their mark, however the baser currents of the sea may turn and tack, and mightiest Mississippis of the land swift and swerve about, uncertain where to go at last. And by the eternal Poles! these same Trades that so directly blow my good ship on; these Trades, or something like them, something so unchangeable, and full as strong, blow my keeled soul along!

Enjoying the great sailing on our southerly course under these following winds, while the swell comes from our back too, the watches have been kept busy during the journey setting and adjusting sails to make the most out of them, while good focusing on the steering wheel is required to keep us on the proper course.

With the fair strong breeze blowing from behind at about 18-20kn, it has been the moment for stretching the most of our canvas and set our Studding Sails. Courses straighten out on their whisker poles, all squares set up to Skysails, the slightly backing and veering between NE by N and NE by E, made us Gybe a couple of times during the day and hoist Studding sails both on port and starboard side.