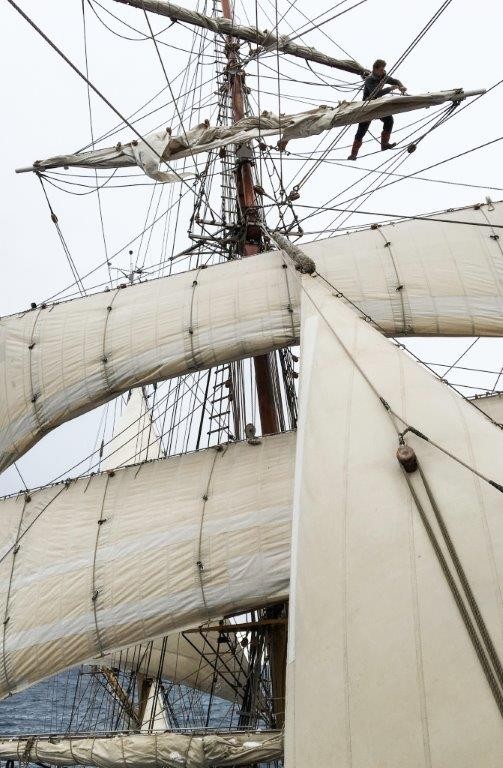 Getting off the Weddelll Sea and make our way back to the Antarctic Sound proved to be a tough cookie to bite. From Devil Island to Hope Bay we had to cross several pack ice fields and then manoeuvre between huge tabular icebergs through the 6nm long Fridtjof Sound. Luckily during those summer months there is no really darkness time during the night, making possible the navigation in the twilight through heavily glaciated areas.,

This relatively narrow channel separates Andersson and Jonassen Islands from  mainland (Tabarin Peninsula). It was discovered by the already well known for us Swedish Antarctic Expedition, 1901-04, under Nordenskjold. He named this passage after the Fridjof, a vessel dispatched from Sweden to search for the expedition when it was feared lost in 1903. A short distance north of this channel we found shelter from the bad weather at the so named Hope Bay. There Europa drops anchor in the early morning under foggy and cloudy conditions, while the snowfall covered our decks once again.

If possible we would have liked to try a visit to the Esperanza Argentinean Station, located on the bay and clearly visible close to our anchorage. But after getting in contact with them, they let us know that no visitors are allowed during those last few days, until the 15th December, due to logistic jobs to be done before the forthcoming change of the Station Crew. The base is occupied the whole year round and hosts a school, sewage treatment plant, fuel tanks, storage containers, freezers, several houses for the families, the main residential facilities for personnel including the galley, dining room and bar, a chapel and the Antarctic Museum with memorabilia from all the Argentinian expeditions in Antarctica and some natural history of the area.

Esperanza Station, was established in 1952 and went trough a major refurbishment in 1978. It is famous for being the place where the first birth of any human being in Antarctica occurred in 1978, when Arturo Palma was born. Esperanza was also the scene of the first ever shots fired in anger in Antarctica when in 1952 an Argentine shore party fired a machine gun over the heads of a British Antarctic Survey team unloading supplies from their ship.

But for us represents a follow up on the footsteps of Nordenksjod and his men, 113 years ago. Here, Grunden, Duse and Andersson, overwintered on the small stone hut they built, before meeting again with the rest of the crew who had wintered at Snow Hill Island to the south, and Paulet Island to the east. Each party unaware of the fates of the others until the extremely lucky and coincidental reunion after a year of hardships.

After being at anchor for a few hours in Hope Bay, it was time to start preparations for sailing. Captain and Jordi have been keeping an eye at the weather forecast and different possibilities to keep going with our trip for the following days, and they decided that the best thing to do is to sail straight away across the Bransfield Strait. Fair winds will allow us to sail, at least until the night, before turning to start blowing into the Antarctic Sound. With this wind prevision, and being on board a sailing ship, the choice is to take advantage of the situation instead of fighting against it later on.

Like this, with SE-ly fair breeze to start our sail heading towards the North, we start setting sail after the morning coffee time. Lower Staysails, Lower Top Sails, Inner jib and Spanker help us to get on our course, followed by the Upper Topsails. The relatively light winds of the morning become stronger gradually as we start leaving behind the Antarctic Sound, and before entering the Bransfield Strait it was blowing to a steady 25kn from the SSE, with gusts often reaching over 30kn. By that time was when we needed to change course towards the NW, gybing to Port Tack and setting first Fore Top Gallant as we took in the Spanker.

Sailhandling just started, as it kept going all along the afternoon. Many helped on deck as for one day we were back to the Sea watches. Tomorrow, again planning more landings, we will all come back to Day watch. Steering was taken from the Wheelhouse when the ice conditions were difficult and were given back to the wheel on deck whenever possible. Even though we sail a traditional Tall Ship, when the visibility is reduced, under strong blowing winds adding the snowfall, we all have to agree the great advantages of modernity’s like GPS, Radar or for example an iPad as an aid to our steering, even if often requires extra attention to work properly under the cold and inclement weather conditions.

The variable conditions are one of the reasons why the Bransfield Strait is known and respected by all who undertake its crossing. Even though it just takes between 80 and 130nm to sail across, its often unpredictable waters make it always and interesting sailing. And paying tribute to this reputation, we experienced several wind changes. First increasing to 30 to 35kn, it was pulling us at a good speed of around 9kn towards the South Shetlands, but when we all were enjoying the great sailing, things started to suddenly change. Before dinner wind died not before changing direction from Se-ly then blowing from the SW and finally coming back to S-ly. Followed by a sudden rise to about 20kn. Again it all seemed perfect to set all our remaining canvas to take good advantage of it, and so it was for a while. Until it was time to get hands on the ropes again right after dinner. Wind veered to SW and died down, at that point, we started to worry about a complete wind shift forecasted for later tonight, with stronger headwinds to come. We strike and pack all the Square sails, remaining just Staysals. Engines roar again and we keep on our way motor-sailing half way along the Bransfield strait.

It is not until then when the magic of travelling under sail is broken, that many come to realise the enchantment to sail our beloved Europa in Antarctic waters, negotiating ice filled waters and harsh climate.

Thinking of you all and the many shifts you all go through to get to the next destination. Stay calm and keep the faith!