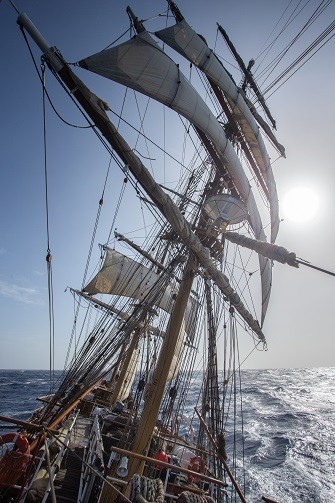 We are having quite a rough passage since our start in Cape Horn, when the wind quickly increased to over 40 knots.

The Europa rolls and heels heavily to Port side during all the journey, riding Westerly swell up to 8 m in strong beam winds. Waves crash over the rails and water runs on deck often today. Just with a minimum amount of canvas set we make our way Southwards to Antarctica. During the night we sailed beam reach under Lower Topsails, Aap, Storm Deckzwabber and Storm Jib. But before breakfast it looks like the wind is decreasing and we decide to set more canvas. Upper Top sails are hoisted, but less than an hour after and due to wind increase and gusty conditions, the Main Upper Topsail is taken away and furled.

The wind is pretty consistent on its direction for the day, blowing from the West, but really variable in strength. In the morning constantly blows around 35 knots, increasing several times to 40-45 knots and gusting up to 55 while the Europa tries to make her way on a 150º course, and with increasing her speed from the last night 3-4 knots to over 8 kn today. From the grey skies in the early morning, the weather improves gradually during the day, and around midday and part of the afternoon we sail under blue skies and sunshine, making our lives on the rolling ship a bit easier while working on deck. But just before lunchtime we are hit by strong 50 to 55 kn wind gusts, with a maximum of 63 kn while the Fore Upper Topsail is furled.

Afterwards, during the early afternoon, the wind decreases and we even experience more rolling, time to start setting a bit more sails, to keep our speed and stabilise the ship. Fore Course is set, together with the Inner Jib and the Storm Dekzwabber is replaced for the normal one, being a much bigger sail. Like this we can keep 7.5 to 7.8 knots on a SE-ly course, while the wind stats to increase again to steady 30 knots, gusting 37 to 40. And after our traditional eight o’clockie meeting the Fore Course and the Inner Jib had to be taken down and quickly furled as well. Harko informed the ones who still could or dared to show for our meeting under those rolling conditions, that we had sailed 125 nm from noon to noon. At the beginning we were pretty slow but since this early morning our speed had been better. We are getting closer to the middle of the Drake. The forecast for the next hours is increasing wind but easing down tomorrow. Will see how accurate is this forecast, as many of us are really looking for a calmer weather and sea conditions period to recover strength after a seasick day and a half.

The sail configuration during the night ends up being: Lower and Upper Top sails set, plus Storm Jib and the Dekzwabber. Experiencing those rough, but great, sailing conditions, not many of us are around, excluding the ones available that are on watch. Anyway having a look at the sea, besides being impressive and dramatic, we could also see some birds enjoying those strong winds. Several White chinned and also some Giant petrels are spotted, joining their gliding flight with the more elegant Black browed albatrosses, and even a couple of the small but brave Wilson storm petrels are also seen dealing with those big swells.

My husband Greg Browne is on this trip. I have no doubt he will be throughly enjoying the strong winds and high seas,and not sea sick at all. I appreciated the information in your article, letting us know how it's all going. It's very strange not being able to contact someone, but also it's part of the journey.

We have a friend from Cortes on this adventure! It s great to follow them (when internet works). Sometimes a rough trip for them so I hope he has great stories this summer. Dorothy