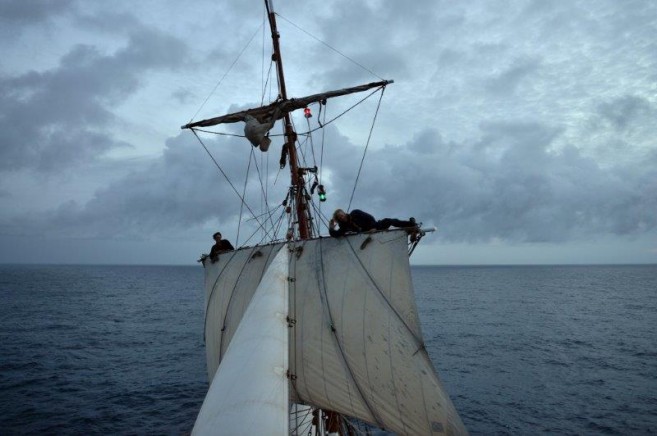 As soon as we left the Horn, the Europa watch system for the voyage crew started, and pretty soon we had to get used to it.

Now besides doing the lookouts we were also steering the ship and helping with the sailhandling. During the night and early morning the permanent crew has been getting the main topsail yard ready to be lowered to deck. This was preceded by quite a long planning and preparation as we talk about a large and heavy yard and several new lines had to be rigged to proceed in a controlled way as we bring the yard down to deck to be repaired. With the firsts light of the day, both permanent crew watches began the manoeuvre that took in total a couple of hours, dealing with heavy weights and different tensions and forces to lower the large yard and lash it safe on the Sloop deck to assess the damage properly and plan the best way to mend it.

After breakfast we are still motorsailing, with all the canvas we can actually set, but the Spanker and the Gaff Top sail. With this configuration and the wind increasing, around morning coffee time we are able to stop the engines and sail along on a SWly course crossing the Drake Passage, after setting the Mizzen sail. Swell increased also a bit from yesterday, but we are still experiencing really good conditions, and even better now that we can actually sail without the aid of our engines.

As daylight increases in the early morning, we realise several ghostly shapes on the horizon soaring steadily over the waves, their wings locked in the straight horizontal position. We’d seen a good number of black-browed albatross already but this bird’s wings seemed nearly twice as long. With a quick look through the binoculars and cameras it was clear that a few of the largest albatross were around. Soon we identify them as Wandering and Southern Royal albatross the largest flying birds in the entire world.

Other birds flying around were the gorgeous Grey headed albatross, a few Giant and also White chinned petrels. All those birds have quite respectable size, from the up to 3.5 m wingspan of the Wandering albatross to the 1.80m of the White chinned petrels, but also a much smaller bird has been spotted, sharing this open waters on the Southern Ocean with its big brothers. Several of the small Wilson storm petrels are also around. Quite impressive for those small but brave birds (in fact the smallest nesting birds in Antarctica) to fly such long distances over any kind of weather and swells. As we deal with light breeze in the morning many of those big gliding birds prefer to wait floating in the water than spend energy flapping their wings, but soon after, as the wind picks up they start their elegant soaring flight again.

We could all learn a bit more about all of them after the morning coffee time when Jordi gives a talk about the sea birds of the Drake Passage and the Southern Ocean, introducing us to some of their most amazing adaptations to the marine life, and going through the different species we could see during our whole trip. Jordi’s talk came just after Ellliot explained on a first sailhandling theory lecture about the basics of the sails and how to set and take them away. This talk was also repeated in the afternoon before Annukka gathered us in the lounge for her presentation on Oceanography of the Southern Ocean, putting a special emphasis on the current systems that we are dealing with around Antarctica, the different water masses around us an their effect on the distribution of the marine life.

During the last days we could realise that not just the air temperature is becoming lower, but also the surface seawater temperature that has been dropping down and now we sail on waters of around 4°C, from the 6 to 8°C that we had in the Sub Antarctic regions, clear indication that we are approaching the Antarctic Convergence zone. During the next hours and tomorrow we will be crossing to the South this biological, ecological and oceanographical boundary between the temperate Sub Antarctic Waters and the waters belonging to the Southern Ocean.

During the day our speed goes up and down between 3 to 6 knots depending on the wind and swell conditions, also affected by strong current from the West and the effects of eddies turning on that mixed waters as we are in the interface between the Southern, Pacific and Atlantic Oceans. But we actually need a bit more speed to reach Antarctica and start our program there, so as our speeds drop to 3.5 knots during the night, the engines are turned on at 23:45h.