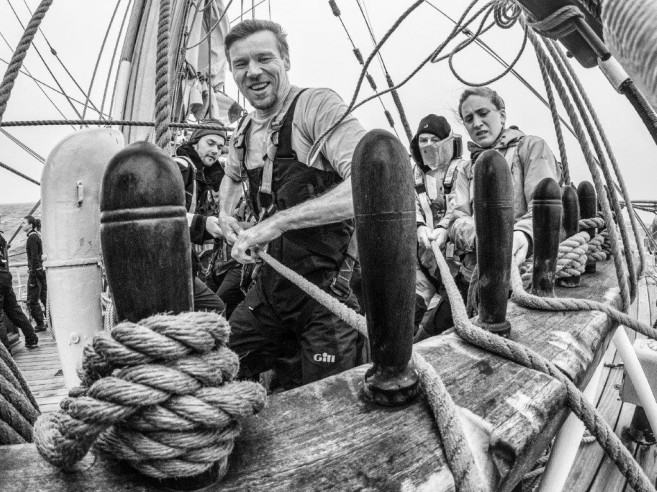 Gradually, and following the backing winds turning more  N-ly, we have been adjusting our course and by the beginning of the new day we were already heading Eastwards on a course between 100 and 110º, under N by E winds of 20 to 25kn. Sailing Close-Hauled for half of the day, and then adjusting our braces gradually squarer, during the whole journey we make good progress in the right direction. Still before dawn, from time to time, the steady fair winds are disturbed by passing squalls. Captain and Mates have good look at them under the faint moonlight leaking from behind a veil of haze, while the clouds spread and get closer; soon they call to standby on the highest sails halyards, they also tell the helmsman to pay attention at the course and the sails. The squalls sweep over the seas reaching the ship, moment when our Top Gallants are clewed-up fore and aft and quick deckhands climb aloft to furl them. At the same time stronger gusts fill up the remaining canvas and drenching rain falls over steersman, lookouts, crew up in rig, and the rest of us coiling the lines off the decks, while larger waves break over them threatening to drive overboard any unattended rope. As soon as the shower has passed, calmer conditions reign again and canvas can be set once more. Being now at a latitude bordering again the 40º S we have more chances to catch the W-lies, or at least more reliable winds than in lower latitudes. We leave a bit north of us areas where relative High Pressure Systems tend to grow, and further South we find ourselves at the verge of the southern Low Pressure systems highway that surrounds the Antarctic continent on this temperate areas. All in all creating windy belts around the world at those latitudes, that have been used since long time ago for long passage sailing. By breakfast time we are steering 90º at good 8kn, speed that slightly decreased when the large Staysail Desmond had to be taken away and bend-off for a rip has been seen on it and is in need of repairs. The smaller Aap acts as a good substitute in the meantime. As good winds kept blowing during the afternoon, slowly but surely we add more sails to the configuration. But first, bracing on Beam Reach and as the hours keep passing getting into more Broad Reach, we strike the Spanker. Setting Middle Staysails and Royals followed. Close to dinner time the wind had been easing a bit at the same time that has backed from more N-ly to NW-ly, as we try to keep an Eastbound course. The speed we keep has been all the time between 7 to 9kn, despite the modest rolling and the increasing bad visibility. The day ended with the Europa making a good way towards Cape Town in the drizzle and mist. 160nm in the right direction had been sailed during the last 24h, but we actually covered a total of 185nm over the ground. Having the current with us helped on the good progress, but a good eye  to the surface flows must be kept during the following days. When approaching South Africa we will find ourselves in an area of high oceanographic instability, where the Eastbound main current at those middle latitudes branches Northwards along the African Coast becoming the Benguela current, but also meets and interacts with the strong Agulhas Current flowing in the opposite direction, rounding Cape of Good Hope and creating powerful eddies, with currents of about 3kn swirling around. Out on decks the windy, rainy and foggy day didn’t make for good birdwatching, nevertheless some White chinned and their parents, the rarer Spectacled petrels were spotted, and a solitary Soft plumaged petrel payed us a short visit as well. In the Deckhouse, crew teach us some sailor’s knots and in the Lounge Jordi makes one of his last talks of the trip, introducing us to the scientific work made with the Elephant seals. For years he has been collaborating with Foundations and Research Centres from Punta Arenas to keep track of the, so far, only
known breeding colony of Elephant seals in Chilean Patagonia. Counting, tagging and even GPS tracking of young individuals have been part of this work.