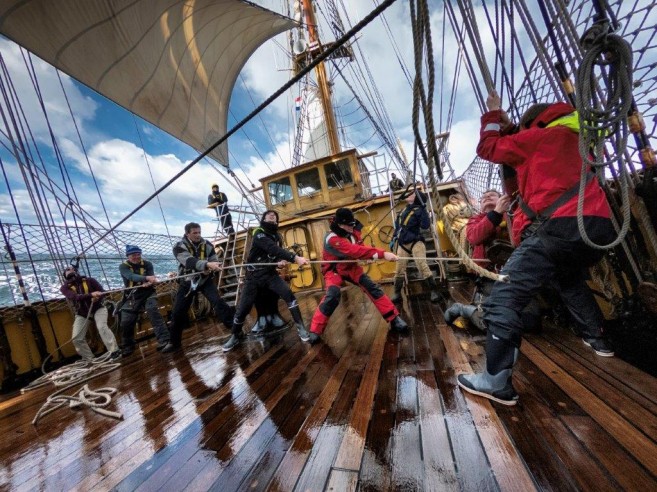 Our departure date from South Georgia started with a bit of an unexpected challenging early morning to heave both our anchors. During the night Europa had turned around pivoting on them and by the time Captain Janke is ready to lift them it proved to be a complicated maneuver. Wind gusts of about 35kn, the proximity to the shoreline and the shallow depths seemed to further complicate the operation. But after an hour and a half, Europa is free of her holds and ready to start her way off Royal Bay into the waters of the Southern Ocean. After a week just doing short legs at sea between sheltered bays and impressive landingsites, now approximately 1500nm lay ahead of her, to stretch her sails and do what she does better, sail on demanding conditions and stormy seas. But setting canvas was not yet necessary. As soon as we got off the shelter in Moltke Harbour, Royal Bay welcomed us with strong winds up to 40kn shooting off the bay, while the rapidly increasing swell made for
intensifying the rolling of the ship. But the situation allowed to sail under bare poles for a while, achieving speeds of about 5kn. Nevertheless, Top Sails were ready to set, already unfurled in the early
hours of the day, soon to be used. The first couple of hours after starting our way, proved to be quite challenging. The different wind direction offshore, together with the confused meeting of the seas created inside Royal Bay with the oceanic swell, all in relatively shallow waters, made for a difficult time on deck. While setting Lower Topsails, bracing squarer to sail downwind to the open seas using the wind blowing offshore, and furling the flapping Upper Topsails, a rainbow above South Georgia glaciers and mountains act as a remarkable closure for our stay at South Georgia. The busy day on deck started. Soon we have to brace again, now more on beam reach, unfurling and setting the Fore Top Mast Staysail. Like this we gradually reach open waters, and there suddenly the wind seems to die down to 8kn, coming from variable directions between NW-N-NNE. Moment to start our engines for a while to better deal with the heavy rolling over the high seas created at the mouth of the bay and prepare everything for the forecasted NW-ly winds as soon as we get off the land influence. Leaving the shallow waters and the coastline behind, we gather once more on deck to brace sharp on Port tack when wee start experiencing the steadier offshore 25kn of NW-ly wind. Engine then is turned off for good. More sails are set then, and by the morning coffee time Europa sails under both Top Sails in each mast, Inner Jib, Fore Top Mast Staysail, Dekzwabber, Aap and the Spanker. Holding on the big seas that keep washing our decks, a stronger gust ripped apart the sail-halyard connection of the Dekzwabber. Crew on watch is called on deck to take it down and quickly bend-on a storm sail instead. The 25kn soon became 32 to 35kn, increasing the heavy rolling and heeling to Starboardside. We can think that under those blustery conditions the work on deck was chilly, considering that we are still sailing on cold waters of about 3ºC, south of the Antarctic Convergence Area, but out there it didn’t feel so cold, as the sun was shining under the blue skies. That is unless being the unfortunate one to be splashed and washed over the decks when a thundering swell crash against the hull and the water pours over the rail. Regardless of the heavy conditions we could enjoy a terrific first day of sailing, riding the impressive open waters off the South Georgia coasts. From then on, the rest of the day we steer the ship high in the wind on a NE-ly direction, sailing close-hauled and following it as it slowly veers towards a more N-ly direction.

Sounds exciting and hard work! Sending love to Clair and Sid from your family in Coventry and Wolverhampton xx

A big hi to old friends Sid and Clair on board! Enjoying following the progress of the ship....