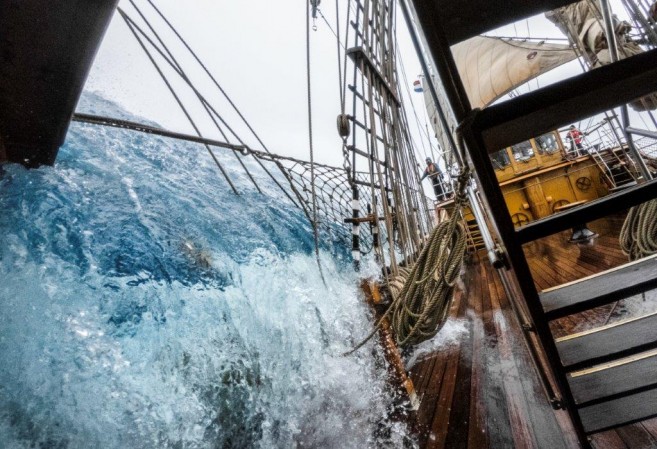 The early hours of the day, still in the darkness Europa sails Close-Hauled on the foggy weather, heeling and rolling on the large swell.
The more or less steady wind of about 25kn, had started to veer coming from a more N-ly direction, as we follow it steering on a more ENE course. We keep the same sail configuration with the Top Sails, Fore Top Mast Staysail, Inner Jib, Spanker, Desmond and a Storm Deckzwabber set above the Sloop deck. The larger one had ripped apart yesterday and it will take some time until can be repaired. Although the wind seems to ease down in the morning, we keep the same canvas set, to avoid sailing too fast and far Eastwards, while Tristan da Cunha lays on a more NE-ly direction. We all wait rolling in the big seas, sailing at slow pace for the chance to get more distance towards the island when the wind changes to a more W-ly, as forecasted for tomorrow. The sea water temperature, that today often keeps the main deck awash, is still in the range of the Antarctic water mass, at about 3.5ºC. We must remember that at South Georgia, the limit between SubAntarctic and Antarctic waters loops north of the island, embracing it in the cold environment despite its latitude at 53 to 54º S. But with our intended course, this will change soon, leaving the Polar Front behind and entering the temperate area. Being close to that mixing zone, we experienced also a mixed of situations during the day. Fog banks seem to announce steep changes on the surface water temperature to come, but large icebergs travelling from further South could be also spotted, making for us to keep a close ice-lookout overnight. It all makes us realise that the Oceans are not a uniform environment. Great currents stir the swell generated by the strong winds, thermal barriers separate water masses, and the chunks of glacier-ice make long journeys around Antarctica reaching sometimes lower latitudes. Resilient powerful winds blow over the seas, making of the Southern Ocean the stormiest body of water on the planet. And today we had one of those tough journeys over its tempestuous waters. Restless as they are, those waters are referred as the Southern Ocean, but this designation hides some controversy. Geographers, oceanographers and
politicians alike, debate its boundaries. Other Oceans are comprised between continents thus making their boundary definition easier, but all three major Oceans merge into the clockwise flowing waters that surround Antarctica. For many, the Southern Ocean is defined as the body of water that surrounds the Antarctic continent. However, the northern boundary of this ocean is not well defined and there are two criteria to describe it. One criteria state that is the body of water below the 60th parallel South, while the other define the northern border of the Southern Ocean as the region below the Convergence Zone. Also there are some who actually don’t even contemplate the Southern Ocean as such, considering its waters part of the Pacific, Atlantic, and Indian Oceans instead. Nonetheless, crossing it represents always an adventurous journey, as it is home for the largest average wave height and is pretty much constantly swept by stormy winds. The ships must sail what sailors have denoted to as the latitudes of the roaring 40’s, famed for the strong W-ly winds used in the past by trading and exploration sailing ships to circumnavigate the globe. Further South we find the furious 50’s, where constantly deep low-pressure systems travel from West to East and sailing crossings must take a good look at their evolution for proper routing of their trips, often enduring a noticeably uncomfortable life on board. Precisely the kind of circumstances we find ourselves braving now that we left South Georgia behind. Adding to this general famous weather of the area, several squalls had
passed on our track today, coupled with their typical stronger wind gusts and rain. Often the large swell pours over the Main deck rails and even some larger ones splash water all the way over the wheelhouse. During the afternoon the wind shows us that can still blow harder, and now, under more than 40kn and still braving heavy rolling and heeling on the big swells, is decided to reduce canvas. Upper Topsails and Inner Jib are furled, and a Storm Inner Jib is bended-on in case the conditions allow to set it, but is kept furled for the watch, and later on stowed away. Still we have ahead a few more hours of this heavy sailing, spiced up with occasional squalls that keep the watches on stand-by in case they came associated with stronger gusts and sudden changes on wind direction. But on this foggy and damp day, the passing clouds swooping over the big swell, luckily seem to carry just rain, and so far, are easy dealt with. Under relatively reduced canvas, sailing with winds that are not favourable for making progress to our destination, 91nm of heavy seas
had been covered during the last 24h, as Janke informed us during our after dinner daily meeting. Situation that we all expect to change soon, if all goes as predicted, tomorrow the awaiting for fair winds could be over and Europa will probably sail faster towards Tristan da Cunha.