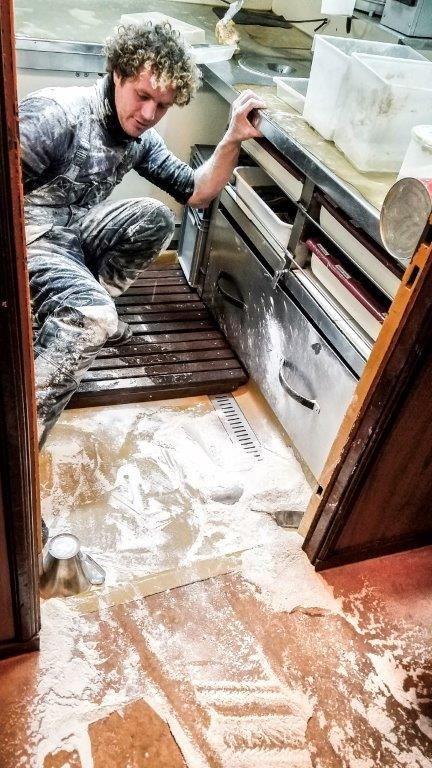 
Sun shining through the thick clouds accompanies us for the first coffee
of the day, but soon it became overcast and drizzle. That, together with
the spray of the 4m swell crashing against the hull, made us wet during
the journey.
Strong SSW winds of about 30kn welcome the new day, as we keep
motorsailing under Lower and Middle Staysails, Spanker, Inner Jib and
Fore Top Mast Staysail, the latter one succumbing to the harsh
conditions of the Drake Passage and shredding all along. Soon the crew
strike and furl it, waiting for better conditions to assess the damage
and probably bending it off to repair, looking for a replacement sail in
the meantime.
Slightly veering and increasing winds, blowing now up to 35kn made a
good opportunity to set more canvas, stop the engine and sail once more.
After the morning coffee-time Top Sails are unfurled and set, joined
straight away by the Courses, all hoisted counting with the help of the
ones of us that were on duty and already overcoming the seasickness. The
work on deck represents an exhilarating experience for many of us, while
waves occasionally wash over the decks and Europa behaves like a
roller-coaster.
Sailing on that fashion and now steering on a 145º course, our speed
increase to over 8.5kn.
Gradually along the journey the weather deteriorates as the wind picks
up while the seas grow. The Drake was about to start showing off its
fierce reputation, at least for a few hours. Conditions to be afraid of
for the ones of us suffering from seasickness but welcomed for a few
that wanted to experience the rough seas and weather of one of the
Planet’s most dreaded seas. The Drake Passage and the surrounding waters
lay in a vast belt of swell and wind that go around the globe in the mid
and high latitudes of the southern hemisphere. This region of the 50º
and 60º latitude south, has earned the dramatic names of “furious
fifties” and “screaming sixties”.
In the Drake Passage, which is sort of a narrow gateway between
Antarctica and South America, the temperature difference over a
relatively narrow band of latitude produces sudden and dramatic changes
in weather and wind. The wind predominantly blows from a Westerly
direction attaining at times prodigious force. Like this afternoon, when
the increasing swell surged on torrents of water pouring over the decks,
as the gusts picked up to over 45kn. Under these conditions it was
necessary to reduce sail. First the Middle Staysails are furled, and
later on, under a good Force 9 conditions, the courses are clewed up and
stowed away as well. Now on our way to Antarctica (now distant 222nm
after having sailed 145nm during last 24h) our speed dropped to about 5kn.
Even some of the most seasoned sailors started to feel the effects of
seasickness on this uncomfortable Drake Passage. Not just this, but the
rough seas presented some troubles to all of us as well, making walking
around the ship and having our meals a whole adventure. Not to mention
the difficulties the permanent crew had to overcome to clean the ship,
take care of the night jobs during their watches or bake bread on a
galley where everything flies over… including the main baking ingredients.
It was not until after midnight that the increasingly rough conditions
started to abate. We all cross fingers hoping that tomorrow will be our
last full day at sea before reaching Antarctic shores. Nevertheless, now
everybody can be proud of having experienced the harshness of sailing in
high latitudes, necessary to reach the Southern continent that often
involves rough conditions. It’s admirable to feel the strength of our
beloved old Europa, riding wild seas and dealing with strong winds. Her
hull today brought us to reach the Antarctic Convergence Area, where the
temperate Sub Antarctic waters meet the colder Antarctic ones. As we
sail along, today the surface water temperature that has been pretty
stable around 7ºC since our departure, started to drop in a short span
of time to approximately 4ºC, and will keep decreasing slightly around
another degree until reaching the colder Antarctic shores.
The wild weather and rough seas didn’t invite much to stay out on deck
to take pictures or spot wildlife. However, many of us got spectacular
shots of the impressive sea and sailing conditions, and also got a
glimpse of the small pod of Hourglass dolphins that joined us for a
while during the morning. They usually show their striking black and
white colour pattern while bowriding ships, escorting them for a while
on their way across the Drake Passage. This beautiful animal is the only
species of dolphin that inhabits these cold open waters in the zone
around the Antarctic Convergence, also called Polar Front.