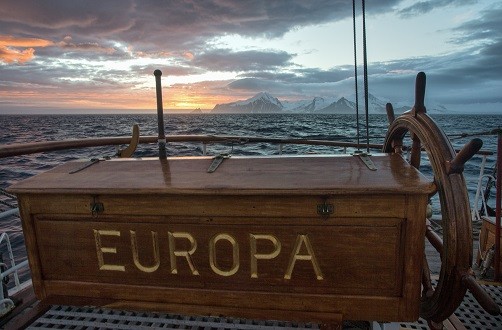 With the landing at Penguin Island last afternoon, we are about to finish our Antarctic adventure and set sail towards South Georgia. But still one last place to visit before start heading there. The legendary Elephant Island, the northernmost main island belonging to the South Shetland archipelago.

With the landing at Penguin Island last afternoon, we are about to finish our Antarctic adventure and set sail towards South Georgia. But still one last place to visit before start heading there. The legendary Elephant Island, the northernmost main island belonging to the South Shetland archipelago.
We heaved anchor from Penguin Island at 02:30h in the early morning, and soon we started setting some canvas. Top sails, Middle and Lower Staysails, but not Desmond, Inner Jib and Fore Top Mast staysail are set, while we motorsail towards the easternmost corner of King George Island. By breakfast time we got off the shelter provided by King George and reach the general wind blowing from the Drake Passage on those open waters. Under NW-ly winds between 15 to 20 knots we unfurl and set more sail. Top Gallants, Royals, Fore Course and Desmond come up.

By 08:30h all sails are set but the higher Staysails and Gaff Topsail, as the wind had turned a bit to be NNW, and we stop engines sailing between 6 to 8 knots Close Hauled passing by an area where we spot several Fin whales. Those are the second largest of all whales, only the Blues are bigger. During the feeding season in Antarctica, they usually hang around off shore waters around these islands, where the shallow continental shelf is narrow and the sea bottom quickly became deeper.
We sail like this until 11:30h when the wind picks up and after instructions given by the crew member Mark, we take away the Royals, still doing 6.2 kn on a 45º course. During the next couple of hours Royals are set and furled again a couple of times, in variable N-ly winds reaching up to 25 to 30 kn. During the whole day we try to point as high to the wind as possible on our way to Elephant Island, passing by the impressive, steep and highly glaciated Eadie, O’Brien, Apsland and Gibbs Islands on our Port side.
Soon Elephant Island appears on our Port bow as well, and with the improvement in the weather we can enjoy it the whole afternoon, as we deal with over 25 kn of wind and short steep 3 m swell. Elephant is 24 mi long and 12 mi wide in its widest part. The name dates back to at least 1821, and could make reference to the Elephant seals that use the island as a resting and moulting area, or it could be due to the shape of the island resembling an elephant head.

Before coffee time we start taking sails away as the wind turns more N-ly and we find ourselves sailing too close to it. Courses are furled first, then the rest of square sails, leaving the Top Sails for the last ones. We leave the Inner Jib, Fore Top Mast Staysail and the Middle and Lower Staysails set and motorsail our way, on a 25º course under 25 to 30 kn of wind and a gorgeous sunset over Elephant Island. And after dinner we point straight North and we take away and furl the rest of canvas. At 21:30 it looks like we find a relatively good anchorage despite the wing gusts 30 kn. We drop anchor East of the broad Endurance Glacier, SE to the S coast of Elephant Island and the main discharge glacier on the island.

In front of our anchorage raises the impressive Muckle Bluff (muckle being an old Scottish word meaning large). Here we plan to spend the night until around 04:00h in the morning when we plan to start our way around the Eastern tip of Elephant Island, heading towards Point Wild. There we plan to do an activity off the ship tomorrow morning. But until then we will have to look for shelter somewhere along the South coast, to spend the night and then make our way around Cape Valentine in the early morning, trying to approach Point Wild. Place of special relevance for the Imperial Transantarctic Expedition (1914-16) leaded by Ernest Shackleton.
That is the very same place where the party from Shackleton's shipwrecked expedition camped for four months until rescued in August 1916. Those group of men stranded here were leaded by Frank Wild, hence the name of this place. From here, Shackleton, Worsley and four other men sailed on a sloop reaching South Georgia and started the rescue operations.

please send us some photos

Hi Jordi, Thanks for sharing your lovely adventure with us and all the best for remaining trip. We are so looking forward to see our loved ones again. Bless Samy