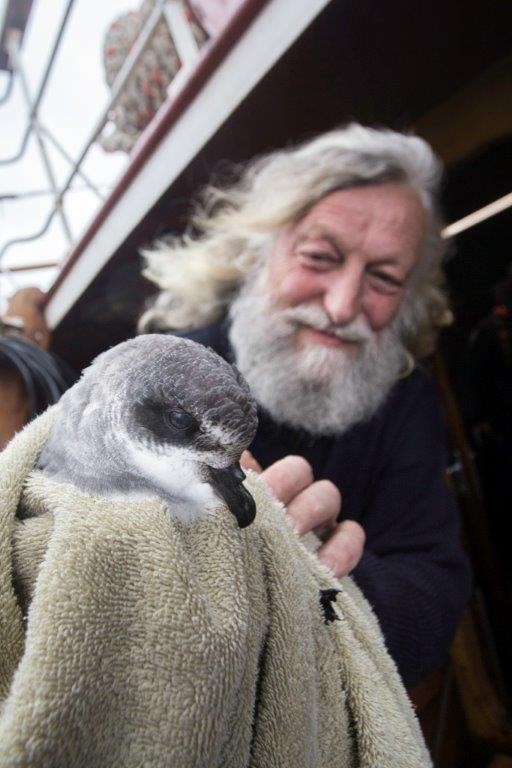 under variable winds and seas, dealing with squalls and Low Pressure systems passing over our heads

After the good weather and seas from yesterday, it just changed for the worst during the night and early morning. At the beginning the wind became SE-ly, as we follow it, our course change to 45º, but not much later the strong gusting winds and snowy weather came, giving a hard and cold time to the watches. Seas also increased producing uncomfortable rolling movements for the ship. Under these conditions first the Royals are clued up, soon followed by the Top Gallants. The frozen rig and piercing snow driven by the strong winds didn’t make the job easy for the crew to climb aloft and furl the canvas, and the waves washing out the decks with freezing seawater supposed a hard test for the, by now, supposedly trained and salty voyage crew.

Once finished, and with everybody longing for a hot cup of coffee, these boisterous seas made use once more of their fierce reputation and under the harsh conditions, the Fore Course gives up. One of its seams rips open and its necessary to climb up the rig again to furl it. Later on, during the much calmer hours of the morning it will be replaced by a spare one, waiting for better sea conditions to be repaired. Main Course is still set, but for better balancing the ship it is also clued up and furled. Part of this jobs are done in the darkness, making it necessary to turn of the mast and flood-lights. On this rich waters, where countless seabirds thrive, light can easily draw them to the ship and eventually a bird can hit the rig and fall on deck. Last night, an Antarctic prion was found, and following the regular procedures for those cases, was given a quiet night to proper recover itself until the morning, when Captain Klaas relieve it. Those beautiful birds are pelagic in the cold open waters of the southern oceans. Their distribution is Circumpolar, breeding at several of the sub Antarctic islands and South Shetlands. Close to our position, the largest nesting area is South Georgia. So far we have seen them flying fast, erratically around the ship with their constant bouncing flight, and now we got a good opportunity to have a closer look at it before it flew back to its oceanic home over the Scotia Sea rough waters.

After welcoming us in, teasing the Europa with great sailing conditions and good weather, the Scotia Sea now started to show its teeth and foul face. From then on, we fall into the weather unstable area in the middle of a new Low-Pressure system, part of a train of small Depressions travelling Westwards that quickly pass along the Scotia Sea. One after the other, they seem to follow our course towards South Georgia. Trying to adapt to the changeable and decreasing winds, Europa changes course and sail configuration several times during the day, but reaching a point when in the afternoon is necessary to start one of our engines keeping some speed over the big rolling swells, that once more keep our main deck awash from time to time.

Care must be taken to move around the ship and harnesses are mandatory on deck. Not just this, but again the galley girls shine cooking their great meals for all of us on the rolling conditions, however we must be careful not to make a mess out of them. With the rolling everything learns quickly how to fly, but the landings are often catastrophic.

This situation lasts for a few hours, starting to ease down when during the day we brace squarer on backing S-ly winds. But just to confirm the variable weather situation, in the afternoon we brace sharp close hauled on Starboard tack, just for a while, when light NE-ly wind starts blowing. Gradually the swell abates, and we start steering on a 25º Course. Soon these changes make necessary to get rid of all the Square sails. It was not until a few hours later, during nighttime, when we could stop the engine and sail again, setting almost all canvas once more.

Along the day we could keep going with the lecture program that crew and guides put together for the trip. Despite the ship movements, we are all growing our sea-legs and sailor’s stomachs. It seems that if not for the spreading cough that quickly is taking over many of us, we won the battle against seasickness and we can more easily attend the talks. Arnoud had an informative presentation about the Ozone layer. This gas represents a small fraction of the rest of gases in the high atmosphere, but its presence and role is of the utmost importance.

The presence of this layer makes life on earth possible because it protects it from harmful ultraviolet light coming from the sun, that at the same time helps to Oxygen to react and create more Ozone. However, this is a reactive gas and therefore disappears again. The balance between creation and destruction of ozone is influenced by other gases in the atmosphere, as well as suspended particles. There is a special role for Freon (CFCs), introduced by human activity, which contain chlorine, also reactive with the UV light in the stratosphere ending up in a process of Ozone destruction.

There was another talk today, this time about the seals that we have seen during the trip and others that we might spot in South Georgia. The ever-present Fur seals in many of our landings at South Shetland, actually belong to a different family than the so called true seals. The firsts ones have the ability to walk on their flippers whilst ashore, they have ears and long layer of fur, which amongst other biological dissimilarities make them different from the true seals. Still many to be seen and close encounters to remember when we will land in the coveted South Georgia.

As usual, after lunch we also got information from our Captain regarding position, weather and wind forecast. We are actually getting to the North side of the Low-Pressure systems sweeping over the area, meaning the good chance for fair winds on our NE-ly planned course. Nevertheless, it will take some more days to cover the approximate 500nm left to South Georgia, while sure we still have to endure windy, cold and wet conditions. When talking about this, many laughs were heard in the Deckhouse when Klaas mentioned our “holidays” at sea. But the true is that with our adventures and misadventures on those wild seas, we are just getting a glimpse of the sailor’s life, living on watches and always busy.

When we are ashore dedicated to our many different occupations, we could imagine that once at sea life of a sailor is easy, after finishing a yard period, dry dock or mooring alongside a city pier, where things are changed and repaired, and all gets ready for departure. It is all “just about sailing the ship”… but those terms involve much more that we could ever imagine during our land based lives. Shifting winds call for sailhandling in any kind of weather, the frequent squalls and storms take the best of us out on deck, steering duties and lookouts must be kept all the time, and maintenance is continuous. There are always sails to furl and unfurl, sheets to be tighten or loose, braces to be trimmed, ropes to change, sails to repair, blocks to scrape, sand and varnish, shafing gear to be placed and replace. And of course, there is just one way to keep the ship in order and reasonable tidy, keep cleaning her every day aside all these other tasks.

However it is true that besides trying to keep the Europa sailing as a classical ship, many things are different from the old times. Today for instance we could start our engine and motor our way to find some fair winds. That helped to keep the rolling on the big swells relatively under control, while on the old sailing times without engine, ships could spend days rolling and pitching mercilessly waiting for proper winds. Situations that anyway were difficult to forecast without the modern technology we have nowadays.

Love your blog Jordi. It is really whetting my appetite for when it is my turn to join you all on Europa in November! Keep them coming.