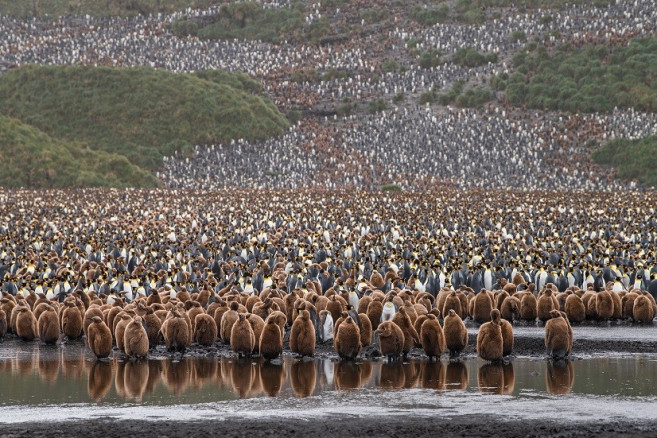 Cloudy morning and winds sweeping along the open seas off the numerous South Georgia bays. Hanging clouds too over the alpine scenery that climbs from the rugged coast to the high Ashley peak, with both Grace and Lucas glaciers descending to the sea, but dying a few kilometres inland.

Just a short ride from Europa’s anchorage for last night, we wake up on that imposing scenery, facing the weather at Salisbury plain. A characteristic long open beach often bashed by swell and long surge, and the massive two square kilometres outwash plane at the backgroundare home for the second largest King penguin colony in South Georgia.

Nowadays about 60.000 couples fill the area. Amongst them, large number as well of inquisitive and conspicuously brown coloured chicks of several ages. An impressive growth of the population if we think on the first observations from 1912, when the rookery counted with just 350 pairs. Countless Fur seals occupy the beach. Solitary big males fight amongst them for a good territory, others try to keep and defend their harems. The females give birth and take care of their pups. And none seem to like to give up any of their space for visitors to their home, like ourselves.

Walking along the crowded coast we gradually approach the main rookery, where penguins stand shoulder to shoulder in a dense mass. Tireless Giant petrels, Skuas and Kelp gulls patrol above them in search of a young chick or an unattended egg. After a while enjoying the spectacle, the first overwhelming impression gives way to the search of patterns and details: where they ways up and down the coast are, the grouping of the youngsters in creches, the moulting assemblies. A World class picture worth the tough landing on the rubber boats.

Repositioning the ship afterwards for our intended afternoon activity, we soon find ourselves entering Possession Bay, the area where, after studying Captain Cook descriptions, is considered where he first set foot, taking possession of the island for Great Britain, naming it George Island, after King George III. It might be well possible that his first landfall was at Prins Olav Harbour, where soon after lunch Europa drops anchor under sunny skies festooned with high clouds. Years passed and the bay became a centre for the Fur-sealing operations, serving as a save haven for the rich sealing grounds around. By that time it was named Crows-Nest, or Crow-Harbour, also known as Rat Harbour, as it was probably one of the first places were rats were introduced.

In the early 20th century, the Norwegians whalers arrived and renamed it Prins Olaf-Hafen, in honour of their Crown prince. The station was operational until the top whaling season of 1930-1931. It is now forbidden to enter the 200 meters perimeter from all the remains and ruins left, but from up the hills we could get a good understanding of the place. At the centre, the large slipway; at either side the boilers to render the blubber, muscle and even bone into oil; at the background the oil storage tank. Atop a rocky cape next to the station, still stand some of the accommodations for the working crew, and closeby lays the rusty hull of the wreck Brutus, built in 1883 and after serving as a nitrate transport vessel, was towed into the bay using four whaling vessels to be used as a coal hulk.

A day of contrasting South Georgia views and experiences. Landscape, wildlife, history. A difficult night with the ship trying to hold anchor in strong winds.  She dragged once, twice, three times and then again, until at about midnight when her six shakes of chain and anchor where heaved and we started the way towards the next destination Fortuna Bay.