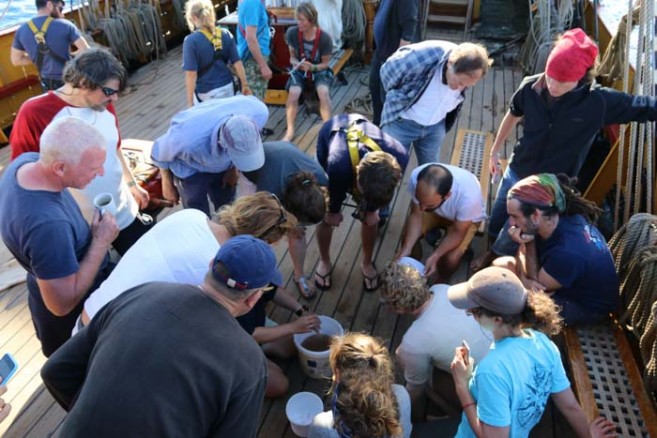 Today was a really specieal day for me.

Today was a really specieal day for me. The wind that has been forecast for today did not materialize and this meant that we were going slow enough to deploy the ships plankton net. While the crew were not happy that we were sailing so slow, I was ecstatic. I have been seeing all sorts of gelatinous life forms during my lookout duties on the bow and was itching to see what has been passing under us as we sail.

Having worked on large oceanographic ships it was a real treat for me to see how the plankton net was deployed on a sailing ship. The net was hung over the side using a block and tackle off the mainsail yard. We were initially going to leave the net in for 20 minutes but barley 10 minutes later when I looked at the net it was full.

So we brought it on board and emptied it into a 20 Liter bucket, which was filled with gelatinous salps. These are animals that filter feed on plankton and can get as long as 50 m. When we placed one into a smaller bucket we could still see the pulsing motion as it tried to pump water through its body. These tiny little animals are having huge impacts when they are found in large numbers. In the Antartic they are increasing in numbers while krill is decreasing, this could be seen as both negative
and positive as decreases in krill numbers will affect the Antartic food chain. However salps have bigger fecal pellets than krill and cause more carbon to be locked away in the deep oceans and therefore play an important role in biological carbon pumps and thus could be increasingly important in combating Carbon accumulation in the oceans.

Another interesting fact about salps is that when they occur in large enough numbers they have been known to stop ships in there tracks, this is because the salp block water intake systems and prevent engines from being cooled thus they start to overheat and need to be turned off. This means that the ships have to wait until they drift out of the salps before they can restart their engines.

Scientist on board the Europa & Marine Biologist at the Uiversity of