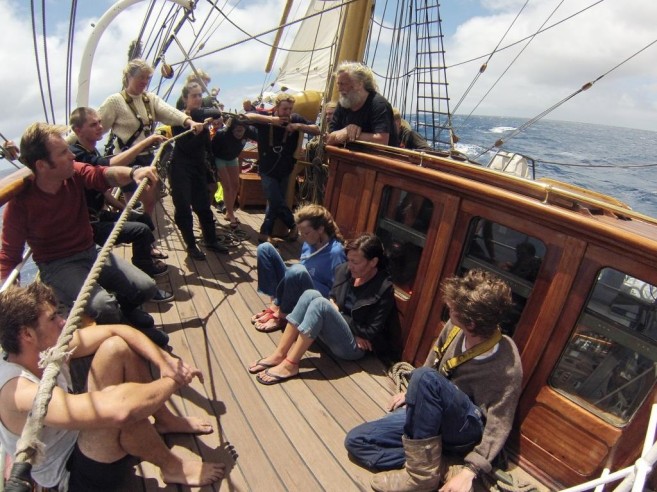 Last night the SW wind was gusting over 30 knots, while we are heeling heavily to Port, sailing close hold on Starboard tack.

lookout on the move

Since the late afternoon and overnight our engineers on board are busy with a problem on our piping, that leaves with no water half of the ship and sometimes the whole ship, while repairing it with the help of both permanent watches. Long and hard day and night for them, and also busy for the crew watches as the regular daily jobs must carry on as well, like sail handling, cleaning and galley duties. For safety reasons, harnesses on deck become mandatory and due to the harsh sailing conditions plus the rough seas, sailing as close to the wind as possible now in a SE-ly course, the lookouts are moved on to the Poop deck.

We sail still on SE-ly course, but the idea is to come closer to the coast, ideally on a SW-ly course. So in the early afternoon we decide to wear ship again, try to sail on a Westerly direction. Captain tells voyage and permanent crew at his daily meeting about how we are going to do it this time, and after checking cabins and common spaces of the ship, where now all sits in a stable position for heeling to Port side, we gather again on deck for a coordinated manoeuvre to wear the ship, that afterwards is going to be heeling to Starboard side. It went quite successfully, with good coordination between all key positions, and both the professional and the voyage crew.

Soon we sail on a Westerly course (WNW), dealing with some showers passing by, as the wind keeps backing slowly. Birdlife around the ship becomes more abundant, as the temperatures drop a bit and the wind increases. Several more species of sea birds had been spotted today; the albatrosses and petrels are slowly increasing on species and numbers on that latitudes and conditions. For first time during the trip the gorgeous Black-browed and the Grey headed albatross show up. Also White chinned petrels, together with their close relatives the Spectacled petrels (that already has been seen a couple of days ago) and another not so common species of petrel visited us for a short look around at the ship: a solitary Atlantic petrel was spotted.. During the night we set all our canvas but the Studding sails, as the wind drops steadily. We try to keep our course a bit North of a High pressure system passing South of us, to keep a bit of speed instead of running into an area without wind again.