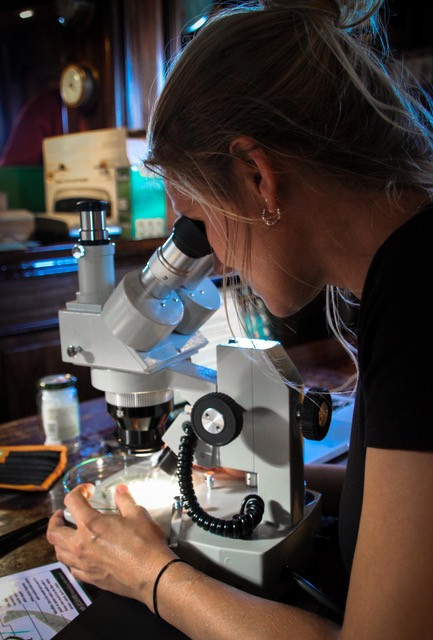 I have finally embarked Bark Europa and started my journey from Scheveningen, the Netherlands and then crossing the Atlantic ocean to Montevideo, Uruguay crossing. The first couple of weeks conducting the research project has led to many scientific discoveries. The research will be conducted throughout the whole voyage covering both the North and South Atlantic Ocean, during which, samples will be collected periodically.

The research project aims to investigate the presence and abundance of microplastics on a transect across the Atlantic Ocean, and to use both current and historical oceanographic data to predict how the microplastic may have been transported to this area. This is carried out by automated visual observation for macroplastic by time-lapse photos and by collection microplastic on the sea surface by manta trawl.

The first couple of days have been used to prepare and set up the scientific equipment, as well as to get to know the facilities on board. The rigging of the manta trawl was prepared with help from the crew onboard. A manta trawl is a net system for sampling the surface of the ocean. It resembles a manta ray, with wings and a broad mouth and the whole trawl is towed on the side of the ship. The manta trawl is useful for collecting samples from the surface of the ocean, such as sampling microplastic.

A boom is used to position the trawl tow line away from the side of the ship and a steady linear course is maintained during trawling. The manta trawl is deployed for 30 minutes in a straight transect. This is repeated 3 times directly in a row, providing 3 samples at each location.

The automated visual observation for macroplastic by time- lapse photos is carried out by setting up a GoPro camera on the railing of the ship. The GoPro takes images every 2 seconds and thereby detects every piece of macroplastic floating by on the sea surface.

The first week has served as a trial week to evaluate the protocol and possibly alter methodology, aims or objectives to suit the conditions on site. I have discovered the difficulties in conducting a research on site far away from a fully equipped laboratory with no service or internet and no connection to the outside world. Out here in the open ocean you are controlled by

the weather and environment around you – scientific equipment and resources are limited and spare parts are not easy to come by. If something is lost or broken, it has to be repaired on site with help from the ships engineer and with the equipment available.

The first week was ideal for trawling as the sea was calm and the wind was light. The first trawl was deployed in the English Channel, and thereafter we have been collecting samples in the Bay of Biscay. In every sample collected, we have found microplastic particles. This can be seen as a positive results from a scientific point of view but from an environmental point of view it is very sad to continuously discover pollution in the ocean.

The camera on the ships railing is also detecting marine debris every day floating by the ship. One evening a big styrofoam box floated by very close to the ship and as we had just practice the weekly man over board exercise. We quickly got everyone on deck and was ready to rescue the ocean from yet another pollutant. The box was recovered and safely brought the deck of the ship much to the excitement of the crew and guests.

After leaving the Bay of Biscay and continuing down the coast of Portugal and Morocco the wind has picked up to around 20 knots and sea state up to 6 Beaufort. The swell is 3-5 meters high rolling in from the aft, making the ship heal from side to side, which makes the conditions not in favour of trawling and analysing samples in the microscope in the ships library has also been challenging.

Soon we will enter the waters of Tenerife where the wind again will be light and the sea will be calm and we can once again deploy the manta trawl and collect samples for scientific research.

Looking forward to keep you all updated.