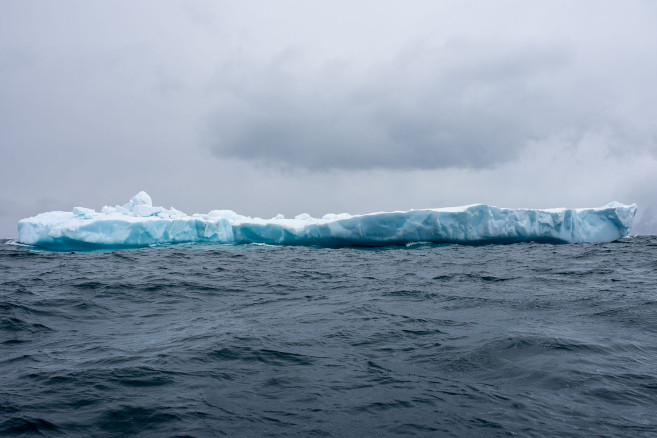 It is on days like today when we face, endure and enjoy the true feeling of being in this southern polar area. Together the Wildlife, weather, seas and ice offered yet another unforgettable episode on our journey.

A morning when the easing winds start backing to Southwesterly and when soon we crossed paths with a pod of Fin whales blowing and swimming fast on the calm seas. They are not alone on those waters, later on a couple of the more rare Couvier blacked whales were also spotted. All adding and building up the truly Antarctic experience we lived along the day.

Still sipping the mid morning coffee, a sudden wind change, now a good North-northwesterly, promptly brings voyage and permanent crew alike to don harnesses, swiftly climb aloft and start gradually unfurling canvas. Top sails are followed by the rest of the squares, then lower and middle staysails. On a Southwest course and braced sharp on Starboard tack, Europa delight on a relaxed and joyful sailing, but not for too long…

The 60º South came with new changes, adventures and challenges. Already in the early afternoon bands of thicker concentration of ice can be seen in the horizon. Closing up to them it is time to douse all sails and start furling them while the lookouts report increasing amount of bergy bits, growlers, brash ice and icebergs drifting on the cold waters with a temperature below 1ºC. With the ice came the fog too. In the poor visibility, the steering is taken by the officers on watch.

Nowadays we know our destination, we know its location and a quite good approach of how to get there. Charts, forecasts, computers, GPS, all to tell us where we are, where and how is the coveted shoreline of Antarctica. But in the age of the first explorers, we can only imagine after what we have seen today that the ice conditions, fog banks and dreadful weather, was the shield and the environment which helped on keeping the secret of the very same existence of Antarctica to many of them for a long time.

I firmly believe that there is a tract of land near the Pole, which is the source of most of the ice which is spread over this vast Southern Ocean.
The greater part of this Southern Continent (supposing there is one) must lie within the Polar Circle where the sea is so pestered with ice that the land there is inaccessible.
…
Thick fogs, snowstorms, intense cold and every other thing that can render navigation dangerous one has to encounter, and these difficulties are greatly heightened by the inexpressibly horrid aspect of the country, a country doomed by nature never once to feel the warmth of the sun’s rays, but to lie forever buried under everlasting snow and ice.

After reading those descriptions of the legendary Captain Cook in a quest to find the Southern Continent, what then those regions have to keep the great appeal they work on us? Hardships and tiring sea watches seem to dissolve on the remoteness of those ample icy seas and lands, and many hear they call again and again to continue coming back, season after season, year after year. For others, once in a lifetime they heed the signals and pay a visit to experience Antarctica.