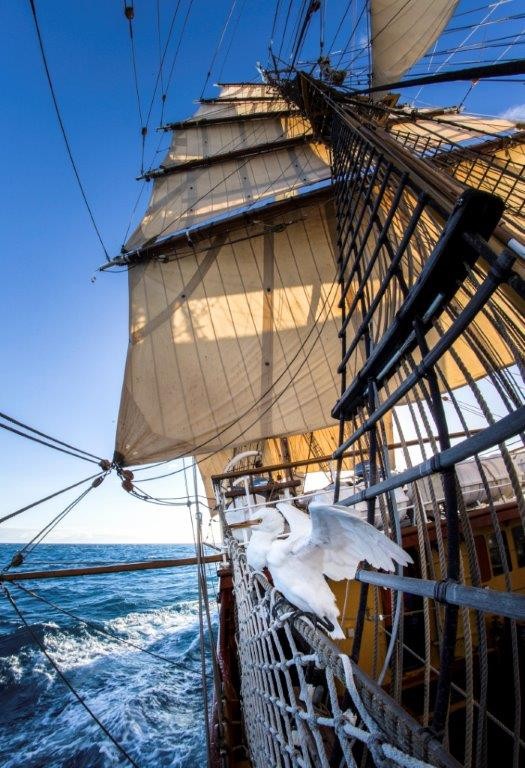 19th March 2018 SCOTIA SEA. Sailing to South Georgia with the wind on our back

Light winds and big swell characterize the dark hours of the early morning. A look at the dark sky reveals ghostly white shadows flying around the ship. A flock of Cattle egrets are the responsible for the noise. As the deck lights are turned on for sailhandling, many of them decide to land on board to take a break on their long flight. Actually, we are pretty much in the open ocean, 300nm NE of Elephant Island and still over 450nm from South Georgia. Far away from the coasts and bodies of continental waters that are home for this species. Their migrating patterns on those high latitudes are not completely understood, but sure those birds have been blown away to the open seas and are grateful to hitchhike in the Europa. Most years they are seen here and there in South Georgia but is not a very common visitor to the island, and they don’t breed there. Likely the origin of those visitors is South America, where nowadays are quite a common species.

During the night, first we are still braced Close-hauled on Port tack, setting also all remaining canvas. For a while Europa sails with all she has, spread to the light W-ly winds. That good direction for us indicate that after the past days trying to gain distance towards the North, now we are at the proper side of the passing Low-Pressure systems. In fact, we are in the wind channel between a High Pressure coming from South America towards South Georgia and the smaller Depressions now travelling south of us. Situation that gives steadier fair W and SW-ly winds.

Soon we have to brace squarer, steering a course about 20º and drop the Dekzbabber that is just flapping around. Light winds make for a difficult sailing, with lots of trimming sails trying to squeeze some speed out of them.

At dawn, blue skies and sunshine make for a good starting of the day. As we know now, this good sun spells should not be trusted while sailing on those latitudes, but today the fair weather stayed with us the whole journey. This made more comfortable the work on deck, perform lookouts and steer the ship. This later responsibility, required care and concentration, just steer a few degrees off course make the Europa wildly roll on the high following swells and winds, and water run over the main deck.

The wind increased during the morning, blowing a good 20 to 25kn from the WSW, as we keep steering almost downwind on a 40º course, as lots of canvas is still set is time to take down the fore-aft sails, leaving only the Main Top Gallant staysail set, together with the Spanker, Inner and Outer Jibs, while we start achieving speeds over 7kn that will keep for the rest of the day.

Under this situation of tail winds we spend the journey braced practically square and jibing a couple of times to take better advantage of the W to SW-ly winds, that on some occasions blow up to 30kn.

The sunny day of good sailing, when sunshine just gets shadowed by a few light showers passing by, left behind a night with slightly easing seas and stars bright in the sky.

Between the hours of sailing and the hectic times of bracing and jibing we got enough time for a couple of lectures from our guides. Mateo surprised many of us with his explanations on Southern Ocean iron fertilization by whales and Antarctic krill. Iron has an important role at sea as a micronutrient for the better growing of phytoplankton blooms. In the Southern Ocean, important part of the iron supply is kept in the krill body structure and it can be released and made available for the oceanic system though the whale feces.

Later on, Arnoud did his most awaited and publicized presentation on weather systems. He called it “Why the weather?”. There he talked about the general circulation patterns on Earth, that are created by heating of the planet surface by the sun, as well as its spinning. These large-scale circulation patters determine climatic zones and move weather systems in prevailing directions, depending on which zone the weather systems are in. The spinning of the Earth is the reason wind is not flowing in straight lines, but spirals towards low pressure systems under the influence of the Coriolis force. After this general introduction the discussion was centered on the wind and weather patterns in relation to recent crossings of the Drake Passage to the South Shetlands, and from Elephant Island to South Georgia.