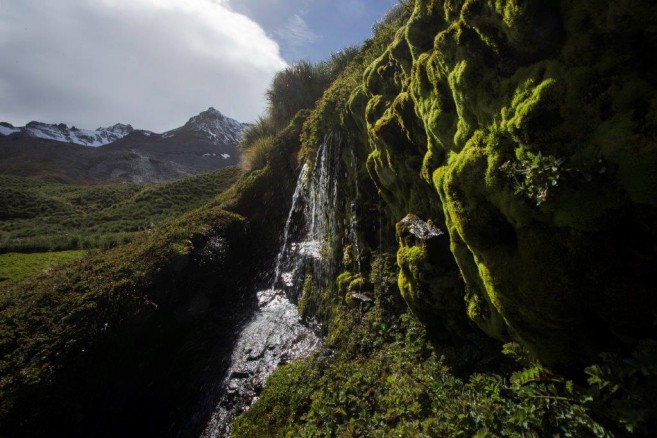 The wind tried to play a couple of tricks during the night but Europa endure the strong gusts under two anchors on good holding ground in front of the legendary Salisbury Plain.

In the early morning was time to pick up the four shackles in each chain and start our way towards Fortuna Bay, in what ended up being an outstanding sailing. Blowing hard,  the wind allowed us to make good progress under Topsails, Lower Staysails and Spanker, sailing again all the way until reaching our scenic destination.

Cold Katabatic winds blast from the glaciers around Fortuna Bay, producing changes on the more general wind pattern as we brace and gybe to get into the cove.

Once there, there is not much shelter to be found, and no good anchorage is available, so the ship drifts while we get ready to land. Regardless of the conditions, our guides decide to give it a go, as the activity for the morning well deserve it.

We were about to face the famous last bit of the Shackleton’s walk across the hills between Fortuna and Stromness Bays.

Sun shining through partially cloudy skies bode a great hike if we are able to land at the swell and surge battered beach.

And so it was, after the scout boat with our guides, soon we were all embarking the zodiacs to go ashore.

Disembarkation wasn’t the easiest one though. Long wave rollers made us act quick, while crew and guides ended up chest deep into the cold waters, providing safety to the rough conditions of the landings site. Torrents of water crashing into the zodiacs was the hallmark of the landing and price to pay before greatly enjoying the much anticipated Shackleton walk.

Once ashore we dealt with the ubiquitous Fur seals, as it has been happening on all our landings. Then we were all ready to start the legendary hike. Besides them, Elephant seals, South Georgia cormorants, Skuas, Giant petrels, Pintails and Pipits are also spotted along the landing beach, wandering around amongst the stranded kelp rafts, and the grassy slopes nearby. Gaining some height over those, we could have a good look to the other side of Fortuna bay, the place where Shackleton, Worsley and Crean came down after crossing South Georgia. They had managed to walk over the heavily glaciated interior of the island, but came down in an empty bay, where there was no whaling station to be found. Now they still had to undergo a couple more hours of march over snowy terrain to reach Stromness, where salvation and end of their struggles for survival awaited them. Not forgetting the large party of men stranded at Elephant Island, was first from here where Shackleton made his first attempts to rescue them.

Even though we were all well rested, well fed and well watered, dressed in our wind and waterproof lightweight gear, we felt a certain connection by being at the same place. The beginning was quite steep, and some layers of clothing had to be peeled off during our first climb.

The walk keeps going through a rocky, barren landscape, and every now and then looking back to see Europa sailing out of Fortuna Bay.

Taking advantage of the great weather and good visibility we stopped to have a look at the landscape that almost functioned as a textbook about glaciers. We could clearly see were the  König and Fortuna glaciers once had been, and how they shaped the landscape. After listening to Jordi explaining this processes, we continued to Crean lake.

It was here that Crean broke through the sheet of ice covering its waters, and got even more cold wet and miserable then he already was. At the side of the lake we took time for some seedless, fruitless poultryless but nevertheless delicious lunch, before we continued towards Stromness Bay.

It was not long before we came to the saddle where the tree men once stood, and listened to the sound of the steam whistle calling the whalers to work. It was 17 months ago since they had heard a sound from the outside world. This sound meant that there was people closeby, it meant that they would be save if they could reach it. Just a bit more to reach Stromness. And so did we. We leisurely walked to the saddle between the two bays. Rested a bit and took some photos before we started our descend, as the fantastic weather we had so far started to deteriorate. Besides the phenomenal landscape seen from there, also we could see a small Gentoo penguin colony just under the steeper slopes.

In this bay they always go quite far inland to built their nests, but this was the first time we saw them so far from the beach. Here they build nice nests of mainly grass. There was a beautiful view of Stromness in the background, with many highways through the grass leading the long way to the coast.

We came down at the steep Shackleton waterfall, where sat down for a bit, enjoying some chocolate, trying to imagine how different it had been for the tree exhausted man that came down here. They were surrounded by an icy white landscape, and when they ended up at the waterfall, they decided to go straight down. They did not have many things with them, but they did have some rope left. They attached their last bits, and lowered themselves down over the slippery, frozen waterfall. They made it to were we now were, and only had to walk the last flat part  to Stromness. They had walked for almost 36 hours, after spending 16 days in a tiny boat on one of the roughest seas in the world, and living for 17 months on the ice.

While recalling those stories, Europa had sailed around and now appeared in the bay.

Once we reach Stromness whaling station, we could not go in between the unstable, airborne asbestos insulated buildings, keeping a 200m perimeter distance. From there countless seals snooze all over the plain, while a bunch of giant petrels feast on a dead one that ended up its days laying on a small pond.

Eventhough Stromness was a rather small station, its remains gave a clear idea of the scale the whaling industry once had here on South Georgia.

It only operated for about 20 years before it was turned into a shipyard for the nearby Leith station. Many huge bronze propellers, chains and masts left behind are still witness of this last period.

There we were picked up and back on the ship we were welcomed by warm soup and freshly baked bread. After enjoying it, we were already hungry for our next walk.

Soon three bells rang again to start preparing ourselves for this new hike, following an old whalers trail from Stromness to Leith Harbour, where the largest whaling station on the island was located.

The short hike goes over a pleasant route first uphill to a great viewpoint over both bays. Fantastic scenery peppered by our old lady Europa anchored in from of Stromness first, then in Leith to pick us up, in sort of a travel back in time, when similar ships bear the harsh whaling conditions in the area.

As we approached Leith harbour, we derive our way towards Hansen Point, in the south-east side of the harbour. On top of this headland lies a well preserved weapon that was allocated here in 1941 during World War Two.  On December 17th, 1940 the High Command of the German Navy intercepted signals from Norway stating the position of a large fleet of whaler boats stationed at South Georgia. Immediately the Germans sent the Auxiliary Cruiser HSK-5  codenamed Pinguin, under command of Captain Ernest-Felix Kruder.

Shortly after the Germans captured the whole Norwegian fleet, becoming the most successful capture made by any German Auxiliary Ship. After this, the British Admiralty decided to send the armed vessel Queen of Bermuda to South Georgia, and set up a few guns at the entrance of the most important whaling stations.

One of these, a 4.5" gun was stationed on top of Hansen Point and was operated by Norwegian whalers who were trained for the purpose. Nowadays it serves as a reminder of a sad part of the history of the island and the whole world.

Soon we embarked Europa, and the Captain choose to move the ship to the safest anchorage around, the neighbour Husvik Bay, where the third walking station of this area was located. It offers slightly better anchor ground to cope with the strong winds that already blow over us and are forecasted to increase during the night.