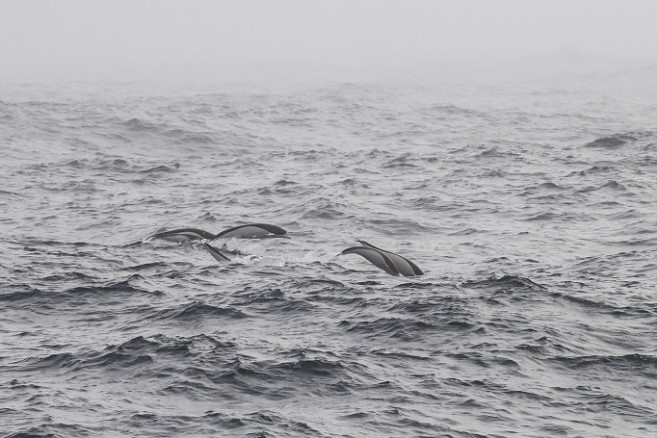 Highs and Lows Weather Systems. Bending and turning  isobars bringing warm surface air. Atmospheric compression area with their associated strong winds between the back of the High pressure that we were riding and a following Depression have passed, and Europa falls into a Ridge of relative High Pressure. Shifting and easing winds becoming a light breeze in disarray. Situation developing along the day, starting with dying winds in the early morning veering to NNE-ly. So far, for the last couple of days riding on the rough seas and strong winds not much canvas is set, but the new situation makes for sheeting down and hoisting the Top Gallants, while the steering became more Eastwards.

Under pouring rain, our speed falls to about a couple of knots. A good moment to deploy another of the ARGO floats we are carrying on board for two European scientific projects. Another source of oceanographic information that today will start gathering and sending more data about positions, temperatures, depths and salinity of the seas, joining the full constellation of similar instruments that drift over the world’s oceans. Data consisting on just a set of numbers. Merely numbers, but subsequently interpreted and related with each other are of great significance to expand our knowledge about the Oceans, their movements at different depths, their effects on the atmosphere and global climate. Helping to understand the workings of our planet, to  follow and predict forthcoming changes.

"Science isn't just about solving this or that puzzle. It's about understanding how the world works: the whole world from the vastness of the cosmos to the particularity of an individual human life. It's worth thinking about how all the different ways we have to talk about the world manage to fit together."

The wind changes affecting us at our local scale, didn’t stop. 15 to 18kn of unsteady and shifting winds to NW-ly and WNW-ly came next, allowing for a NE-ly course, until the afternoon when Europa gradually falls into a windless area, where capricious light airs turn around back and forth. Royals and Middle Staysails are set in a hopeful deed for keep on sailing. But rapidly growing swell in combination with the light winds make for unworkable steering efforts.

Pitching, rolling, heeling. Westerly swell meets the large residual Northerly that had been growing with the raging winds further away during the past days. Engines roar over the confused massive seas resuming a northwards course. Royals yards come down, sails are clewed up, buntlines hauled. Middle and Lower Staysails halyards are eased, downhauls pulled.

Air is full of moisture, weather is misty, drizzle. Unearthly views from deck, a combination of big seas, fog and still winds in the remoteness of the South Atlantic. A dorsal fin cuts through the waves, then another one, then a small group of False Orcas swim pass the ship. A few moments passed, then the dark bodies, the bulbous heads with white streaks behind the eyes and the light saddles of a full pod of Pilot whales take shape close to the ship. They will accompany us for over an hour. At the distance the streamlined black and white bodies of numerous Southern Right whale dolphins breach and jump in their energetic swim. The pelagic habits of this dolphin in a circumpolar distribution between 40º and 55ºS make for very occasional spotting. Today, at about 700nm southwest of Tristan da Cunha, all those species make an appearance together during the afternoon for the amusement of all on board. Sure we sail on a rich oceanic area that provides them nourishment. Not just for them, as today was also the first day when some of the seabirds that use the island as their home or nesting grounds can be seen in increasing numbers flying around the ship.

Elegant Sooty albatrosses pay a short visit, their breeding areas in the South Atlantic being Tristan archipelago and Gough Island. Great shearwaters fly with us, boundless travellers along the Northern and Southern Atlantic from their homes at those same islands. Wandering albatrosses come and go as the hours pass, perhaps Tristan albatross subspecies, endemic for the archipelago, but both not easily separable at sea. A single Grey headed fly by, not showing great interest for our ship.

Wildlife in the convoluted seas of today and in a misty sky that didn’t steadied its winds until the evening when a light SE-ly breeze blew.