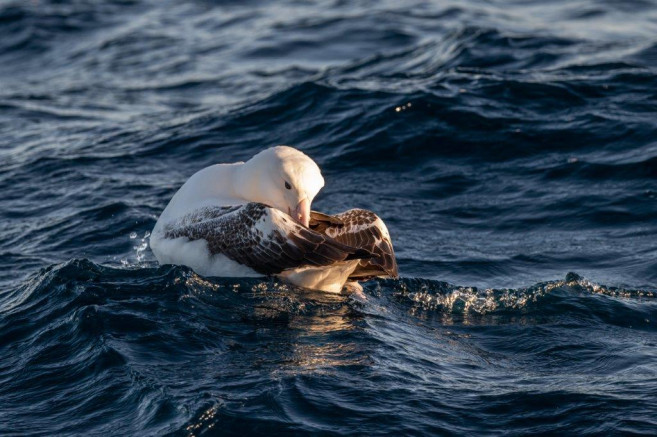 After our slow start on the first two days, with winds topping out at just 2 Bft, we finally started moving for real on the early morning of the 29th. The morning also brought clear skies, so that was a double bonus. The big swell from the day before had given way to an almost flat sea with the 14kn wind just rippling the surface. In these smooth conditions, we managed to reach a speed just above 9 knots. Some of that must have been caused by the Falkland Current, that starts here on its path around the East side of the Burdwood Bank, which we are about to cross. Wait…wind, clear skies, smooth sea, 9 knots? That’s a quadruple bonus!

The whole day was spent in the same conditions, so there was not a lot of sail-handling to be done. The crew had to find other ways to stay busy, but we can’t just pull everything apart for maintenance either. Jordi had a field day photographing the seabirds which were around in large numbers in the waters around the Burdwood Bank.

Sailing without voyage crew is a bit of a shock to the system. Without voyage crew on board, there is no large amount of dishes and after dinner cleanup to be taken care of and there is no eight o’clock meeting in the deckhouse to disturb the watch change at 20:00. The amount of nightly cleaning to be done is also significantly less. Normally the crew spends barely any time on the helm, but now they have to steer the ship 24/7, doing 45 minute turns at the helm. With the ship feeling
almost deserted, the watch handovers seem to become more of a social get together, with crew hanging around longer than usual. Some are asking for news about the world. A world we are physically isolated from at the moment, but not mentally. All are thinking about friends and relatives.

Just after sunset we were gathering behind the wheelhouse when we saw a satellite pass overhead, then another one and another one. Then a train of four satellites and they kept coming, all following a single path. We must have witnessed the passage of a train of mr. Elon Musk’s  Starlink satellites launched not too long ago, while they were still close together. These satellites are launched in stacks of 60 at a time, after which they slowly disperse throughout their orbit. They are to form part
of a global network of 12000 satellites, providing broadband communications to the world. Sixty satellites passing single file
overhead is an impressive sight, but it also spoils the beautiful starry sky, let alone 12000 of them.

I can’t say I’m looking forward to the possibility of being able to watch Netflix in the middle of the ocean. It clashes with our motto of being more connected without the internet. On the plus side, it won’t hurt to provide easy access to communication and knowledge, in areas in the world where that is now difficult or non-existent.