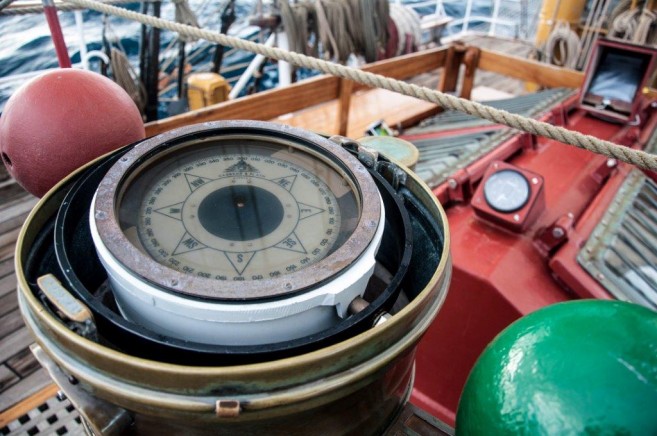 The numerous showers crossing our path brought a slight wind increase and associated light rainfall. These conditions started already last afternoon and kept affecting us overnight. So far no changes on the sail configuration where needed during the first hours of the new day, just a better concentration on the steering wheel to keep up with the often passing squalls.

Like this, with almost all her canvas set with the exception of the Mizzen Royal Staysail and Gaff Top Sail, we were still racing the South Atlantic at speeds between 7 to over 10kn.

But steadier W by N winds of 17 to 20kn at breakfast time made for setting the remaining sails. The overcast and rainy morning found the Europa sailing under her full canvas, keeping good speed on her way to Tristan.

Next hours were characterised by backing winds, from W by N to WSW, related with a High Pressure System approaching our track. At the same time the swell rises during the afternoon. On the wheel we try to keep the sails full, slightly changing our course northwards to keep a speed over 6kn.

Steering now on the magnetic compass, it shows quite a bit of variation, (about 18º) to the iPad screen, as this new devices determine true North, as opposed to magnetic North, and they are unaffected by perturbations of the Earth's magnetic field.

Magnetic compasses are very stable in areas close to the equator, which is far from "magnetic north”. When we sail in high latitudes closer to the magnetic poles, the compass responds in a more sensitive way to crossing the planet’s magnetic field lines.

Without a doubt, the new GPS technologies help us learning and steering on a straighter line, but after more than 30 days on board is becoming time to try some more traditional ways. The iPad GPS can be considered as a specialised modern navigational tool. These devices are based on catching the signal from a group of satellites that orbit the earth transmitting precise time and position information. Using distance measurements of minimum 3 satellites the GPS establishes an accurate position fix. But it is not an essential gadget for our purposes while crossing the South Atlantic, and  as many say “anyone can stay on the right path, given the right tools”. And the magnetic compass has been this main tool for navigation since centuries ago.

Before it was invented, early travellers and mariners navigated by the sights of land and positions of sun and stars. But during the 12th Century the first compasses were created, and it is thought that they were first used by Chinese sailors. The principles of the instrument we use nowadays are the same used by those early navigators, basically a floating magnetised needle in a bowl of water. It was not until late 17th century and even about 100 years later, when astronomical discoveries linked with creation of charts allowed for the designation of lines of longitude and maps became a tool for the golden age of navigation to leap forward.

The ship’s compass is a liquid one, where the magnetised device is submerged into fluid to protect against excessive swing, improving readability and reducing wearing, mostly if they are mounted like on board ships, on a gimbal mount. First working models were introduced by Sir Edmund Halley in 1690, but they were improved and became usable on ships starting as late as 1813. And even it was not adopted as a standard tool aboard by the Royal Navy until 1908. As it is a magnetised device, it is affected by the surrounding metal, giving us a variation between its readings, the magnetic poles and the GPS true-north figures. Thus, they are usually located between two metal balls (green and red) and sitting on a pedestal that houses small movable magnets to counteract the effects of nearby ferrous materials, to compensate for external magnetic fields, making the compass more reliable and accurate and to allow corrections of this effect.

Originally compasses were just pointing to markings indicating the magnetic north, but later the circumference was divided in equally spaced points, called Points of the Compass in the compass rose.

In the old times, European mariner’s compass we find 32 of those points. Their names follow the nomenclature of the four cardinal directions (N,S,E,W) each at 90º of the compass rose. The next subdivision is a bisection of this 90º in a half, corresponding to the so called Intercardinal directions (NE, SE, SW, and NW). Those eight directions together are called the Main Winds, and an instrument with those divisions is the one we mount on board.

Still splitting the angles between them in half, it gives us the Half Winds (NNE, ENE, ESE, SSE, SSW, WSW, WNW and NNW). Next division end us getting the full 32-wind compass rose, adding to the former ones the Quarter Winds, called as for example North by east (NbyE) and so on.In that way, each point on the compass = 11°   from the next.

Besides those divisions, in modern times the standardised system adds also the 360-degrees, where 360 equidistant points divide the compass dial.

Steering the ship with a given Compass course and using the wind to fill up our sails, does also mean to stay alert of our surroundings, not just keeping our eyes fixed on the instrument. It also involves looking for clues of the course we are on, like seeing the wind working on the sails, our relative position to clouds in the horizon or the moon and stars at night. Not all of us Master this way yet, so iPad is turned on again for some hours to keep us in a straighter course.

All an all, in our daily after lunch meeting with the Captain, we are informed about our progress, a good 186nm from noon to noon, and the distance still to cover a mere 780nm. Almost reaching half way on our way from South Georgia to Tristan, as Larsen Fjord is 691nm behind us. For the first time since our departure from the island, the weather was good enough to gather on deck under all the canvas set and enjoying the partially cloudy skies with the sunshine breaking through the clouds. Sure gradually we are getting into areas of milder temperatures.

While Captain speaks, a couple of gorgeous Sooty albatrosses elegantly soar around the ship. After our adventures at South Georgia, we are used to the closely related Light-mantled sooty albatross, showing grey backs contrasting with darker heads, but they don’t nest in Tristan and are considered as a scarce visitor. But most common on the waters we are sailing now is the darker Sooty, also distinguishable by their light narrow eye-ring and a yellow stripe at the sides of lower beak. An estimate number of 8000 pairs of them breed between Tristan and Gough islands, out of a total population of about 15.000 pairs. The rest nest at other sub-Antarctic islands excluding South Georgia.

Later on in the afternoon they are joined by several more of those gorgeous birds, plus a couple of the huge Wandering  or Tristan albatrosses. At sea these species can be easily confused as they look pretty much alike. Tristan albatross is described as slightly smaller and short beaked and in fact is the one that breeds in Tristan archipelago, while the Wanderers nest at the sub-Antarctic Islands of South Georgia, Prince Edward, Crozet, Kerguelen, Macquarie and Heard.

At the same time we are joined by all those birds plus small flocks of Prions and an occasional storm petrel, we are called on deck to change the sail configuration. Wind has been slowly decreasing and the sea conditions flattening. First the Fore Mast is braced squarer and then we take away and furl the Staysails on the Main Mast, Fore Top Mast Staysail and the Desmond on the Mizzen Mast. After a while and checking the evolution of the forecast and the high pressure system overpassing us, Captain decides to gybe, changing now to sail on starboard tack, steering on a more NE-ly course.

As the hours pass by, gradually we run out of wind and during the starry night it backed becoming more S-ly. We just can keep up at speeds just below 3kn.

Working on deck has become a more enjoyable activity during the last days, as we all can feel the temperature rise. Immersed as we are now on the temperate areas and just leaving behind the waters south of the Polar Front, it was time for a wrap-up of the Polar Ecosystems on a lecture. There the Antarctic and Arctic systems were compared with their similarities and differences, how they can control the global climate and the diversity of the wildlife inhabiting both.