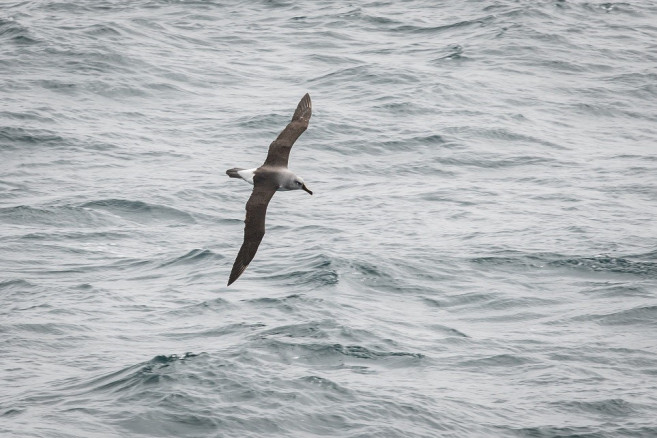 A smooth sailing day over moderate seas and fair winds has brought us to about a day from the South Georgia coasts. Behind us, a good stretch of 1158nm since we set sail from Puerto Madryn.

The temperate waters in the northern Argentinean Patagonia have dropped to about 4ºC, their low lands and semi-desert landscape soon gave way to the open ocean swells and currents, which now, just about to reach the first destination of our voyage, they started to bring to our sight large icebergs.

Probably drifting away from the grab of the Weddell Sea, some of them venture out at sea, easily reaching South Georgia latitudes. They came to view already during a cloudy morning, visible both to the naked eye and on the ship’s radar. It is the pieces that break off from them which can represent a hazard for navigation, as the electronic instruments sometimes can’t get a clear signal as they float in the rough seas in the Westerly winds blowing above its surface at over 20kn, so, sharp lookouts are necessary.

Lookouts that have been spotting too a few of the Humpback whales that use these waters during their feeding season. This is the time of the year when they arrive in those southern latitudes, migrating all the way from the breeding grounds along the Brazilian coast. They belong to what scientists call the “A” population, using the South Atlantic. Further South and westwards on our trip we may come across some of their relatives, which tirelessly migrate yearly from the tropical and subtropical waters of Panama, Colombia, and Costa Rica to the Western shores of the Antarctic Peninsula and the South Shetland Islands. A sight of the smaller and faster Minke whale was also reported.

Using the vigorous winds, effortlessly gliding over the agitated sea surface, our companions for the last few days Black-browed and Wandering albatrosses, Prions, White-chinned, Giant and Wilson storm petrels keep showing up. But today a couple of different species follow the ship for a while as well. Stylish Light-mantled albatrosses share the winds soaring next to us, while always keeping a bit more distance a beautiful Grey-headed albatross seems to keep an eye on our doings.
Still well over 180nm from South Georgia, many are surprised to spot on several occasions Fur seals and penguins porpoising in the cold waters. But it is nothing to be astonished about when we talk of the most adapted birds to the oceanic environment and highly tuned mammals to the sea life.