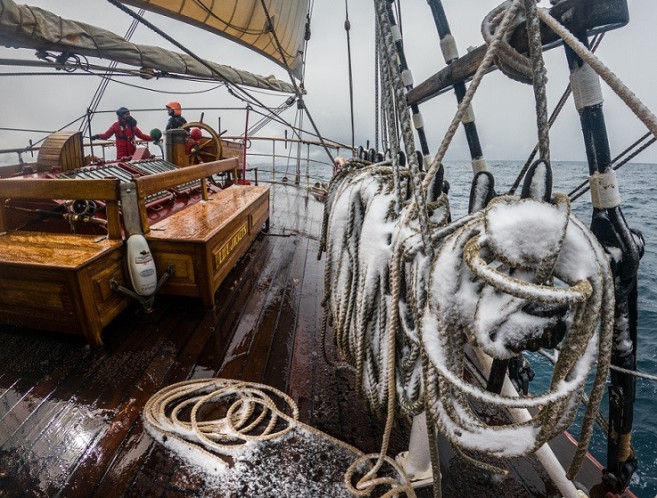 During the day, a combination of sunshine with numerous snow squalls passing by. Though luckily with not much wind on them, they hit us with darkening of the skies, dropping temperatures and snowfall. On deck many wear the best technical sailing gear.
Night watches see our warmest clothes. Down jackets upon layers of thermal underwear and mid layers while standing the harsh watches or trying to keep the ship on course at the wheel.

Nowadays the Scotia Sea sailing thrives on terminology such as waterproof, windproof, sealed seems, high technological fabrics. A completely different set of circumstances suffered in this very same waters by the skilled captain and navigator Woorsley, Shackleton and four of their strongest crew amongst 26 more, aboard the 6.9 metres sloop “James Caird” over 100 years ago. Running actually in the opposite direction to what we try to sail, they undertook an epic 16 days journey from Elephant Island to South Georgia, after the sinking of their ship “Endurance” in the Weddell Sea. Aboard the ship’s sloop, six starving men, tired and fighting for survival; a small boat with an only sail, a compass, a sextant and a watch. They braved those rough waters along the latitudes of the Furious 50’s in old wet woollen and cotton clothes, oiled canvas, deteriorating furs and skins, in what is considered still nowadays as one of the most challenging open boat crossings in the world.

And indeed challenging it is. Even for a 56 meters three masted Bark, rigged with over 20 sails. The way from South Georgia to the Antarctic Peninsula takes on the nose the predominant westerly winds and the passing low pressure systems. It is a similar situation when we look at the ocean and its surface currents.
Challenging weather to adapt to, now setting sail, now dousing and furling, then bracing or wearing ship. A strategy play amongst the ocean and its moods, the atmosphere with its variable winds and angry squalls, the distance to cover and the different courses to take.

A game that sometimes bring us to wait for more favourable conditions; on other occasions such as this morning, we run into the need for more speed. Add then more canvas, and if the wind eases down too much, get a bit of help from the engines. Suddenly the wind wakes up in not the best of the moods and turns from a West-northwest breeze to a Southeasterly blows of 30kn. Hands on deck withstand the wet snowy conditions and pull the braces around, to sail now to the SW at a good 6kn. Too windy to keep all the canvas that was hoisted a few hours later, Top gallants and Outer jib are pulled down and furled. Discovering on the latter one a long rip on one of its panels. In need of repair later on, the sail is bend-off.

Temperatures had dropped significantly during the last days with the freezing cold wind blowing from the south, that has travelled from deeper into the Antarctic continent and the Weddell Sea running over ice caps, icebergs and sea ice. On top of that, the evening and the following dark hours came with several fully loaded fierce squalls running fast over the fair 20kn wind.