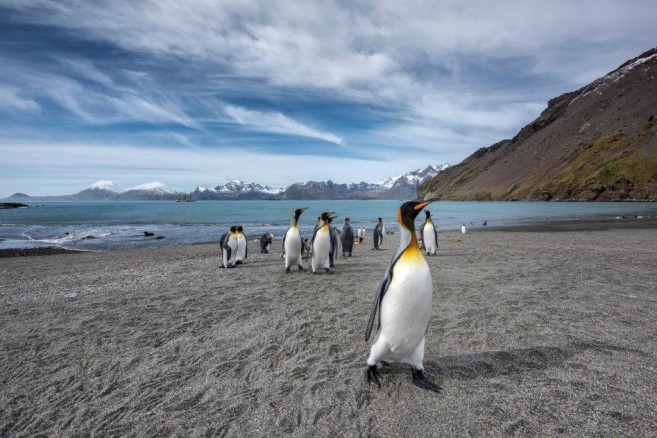 After a pleasant and starry night anchored at Moltke Harbour -the small indentation close to the entrance of the wide Royal Bay- the sun shines in the early morning and the calm conditions invite to start the day going ashore right after breakfast. The predicted winds should be already much stronger than the light breeze we had so far. And that is a place where is worth to keep an eye at the weather. Royal Bay has the reputation of being one of the windiest bays at South Georgia, with occasional squalls of hurricane force when the katabatic winds shoot off Ross Glacier. Situation that often happens, mostly under W-ly winds climbing up the slopes of the large Brogger glacier at the Southern coast of South Georgia, sweeping through the narrow Ross gap up in the mountains and swooping down Ross Glacier. Besides that, the harbor is also open to the East, a combination that create this blustery character of Royal Bay. But nevertheless, the small Moltke Harbour can offer a relative shelter of what goes on further in the larger bay, as we luckily experienced last night and during the morning. The relative protection offered by Moltke was used as well in the 18-hundreds by Germany to install here the South Georgia’s first scientific research station, established in 1882 and operative for a year, by the German International Polar Year Expedition. The harbor takes its name after the three masted steam corvette Moltke which was their Expedition vessel and the first powered craft to operate at South Georgia. Actually the ruins of the station are located the Easter entrance to the
harbor, at Koppen Point, visible with the help of binoculars from our anchorage, 4knm away further inside Moltke. Koppen Point is not the easiest place to land compared with other close areas in the same bay, but probably the well-known variable conditions of the island and especially Royal Bay, made for the landing day a good choice. Also big amount of man power could build the well assorted base in short time. This period of time represents a break on the ever present whaling and sealing history of South Georgia. The Germans spent a year studying the region doing Astronomical, meteorological, geomagnetism, gravimetric measurements and tidal observation. The idea was to gather all this data and record it on the longitude diametrically opposite to an already established magnetic observatory in Australia. Making comparative analyses to have a better understanding of how our planet works. After their departure in September 1883, the station was abandoned, with the exception of occasional visits from whalers and sealers, and a short stay by the ill-fated but nevertheless scientifically successful Filchner Expedition in 1911. Regardless the arguments between him and his Captain, crew and other members of the scientific team on board their ship Deutchland, that led to an unplanned overwintering plus a shortening of his expeditionary plans, the scientific data collected was of great value. Most known was the oceanographer Brennecke discoveries of the distinct water masses in the Southern Ocean and their flows at different depths.
Even though the area has an interesting historical background, this morning our guides prefer to land at the more scenic sandy beach at the head of the bay, just close to where Europa lay at anchor.
Once a scout zodiac goes off on a recognizance mission of this new spot to visit for the ship and our guides (a handful of kilometers away from the most known German historical site), what it looks like a gentle swell and easy landing at the long sandy beach, end up being a bit trickier, as usually happens in South Georgia. Long surge along the coast actually made for yet another stern landing and the use of dry-suits for Sarah and Richard. After the zodiac shuttles, we all stand at the wide, grey sand beach at the end of Whale Valley, which stretches inland to the foot of the mountains. At either side of it, steep scree slopes adorned by beautiful waterfalls invite for a short hike inland.

Not before stopping for a while at the beach, where on that occasion we found many Gentoo and just a handful of King penguins. The Gentoo penguin colony seems to be located about a kilometer inshore along the braided river at the flat bottom of the valley. Resting next to them, a group of male Elephant seals were molting. They will be ashore for a couple of weeks more, getting rid of their old fur and growing a new “diving suit” that will last for about a year, until the end of the next breeding season. Laying piled up at the beach, their skin now is pretty much exposed to the sun in a clear day like today, they need some extra protection against it and also to try to avoid getting too warm. For that, now and then these impressive animals throw sand over their bodies or try to hide under stranded kelp. After a few explanations and reminders by Jordi about their behavior and life cycle, many joined our guides on a short hike up the Whale Valley. As we go on, clearly the weather started to change. From the sunny conditions, soon clouds capped the mountain peaks and the wind started to increase. A clear signal for us not to walk too far or to prolong the landing much longer. Anyway we made it to the foot of a picturesque waterfall, where we took some moments to sit and have a good look at our impressive surroundings, before heading down again, following a slightly different route the brought us along the larger river flowing through the valley and down to the beach. There the swell and wind conditions were still reasonably good, offering what it was about to be our last
adventurous zodiac embarkation of our days at South Georgia. Once we were all on board the wind became more gusty, blowing up to 35kn, a good indication of the nature of the area and not really
encouraging an afternoon landfall. Instead, our Mate Finn gave us a reminder on the Abandon Ship Procedures on a full drill together with the pertinent explanations. The blowy conditions just got worse as evening was approaching, making for dropping a second anchor to better hold our position overnight, when stronger winds were forecasted. Four shackles in each anchor at just about 10 to 12m in depth almost guaranteed a relatively quiet night. Luckily Europa hold on in position when gusts up to 52kn hit Moltke Harbour while a few miles off in the middle of Royal Bay, just a quick look revealed even stronger blasts. Looking ahead in the last weather forecast available shows that our departure time would be in the early morning, when we expect the N-ly winds to ease a bit and back to a more NW-ly direction. Today, the little exploration morning gave us as a result a landing with an awe-inspiring landscape and a mix of the different charismatic wildlife of the island. An excellent   South Georgia treat as a farewell to the week we spent trampling her shores and mountains. The island also seems to wish to give us reminder of her famous powerful weather, with heavy winds and fierce gusts during the afternoon and night. Soon, just in a few hours, will be time to leave. For the next leg of the trip, we all have to brave the approximately 1500nm of the wild Scotia Sea and South Atlantic until we can catch sight of the spectacular volcanic islands of Inaccessible, Nightingale and Tristan da Cunha.