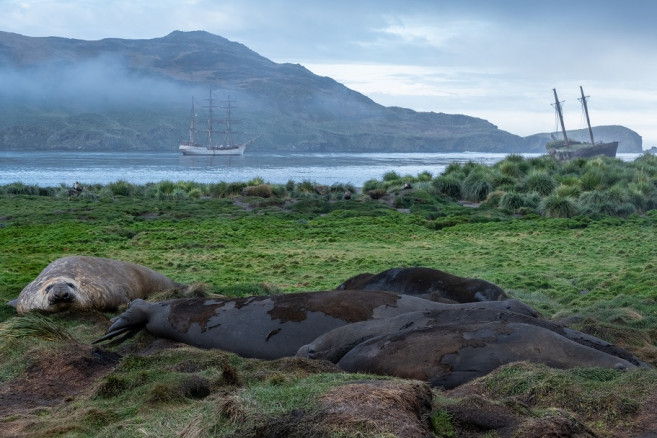 A game. A game where the participants play strategy with winds and swells, stormy coasts and sheltered bays, schedules and changes of plans, angry seas, and calm areas. Where to find them, how to get there, what to do if coming across wild seas and other vessels engaged in the same plot. Inherent qualities of a trip on the untamed island of South Georgia.

Waking up to 4 meters northeasterly swell, rolling as approaching our planned destination, waves breaking high along the rugged coast, a morning that was asking for redesigning our plans. Closeby, a good inlet where the experience of the Captain tells of calmer seas and good anchorage, the beautiful Ocean Harbour, originally the objective for this afternoon activities. A hint that proved right. Rolling became less and less as the Europa enters the inlet, until becoming practically windless and still waters at her classical anchorage in the area.

From then on, yet another play. A game of lights and shadows, high clouds and fog, poor visibility, and clear weather. Old tales of sealing and more recent ones of whaling. Death, business, profits, afterward the nature reclaiming its rights. Tall ships launching and shipwrecking with a 100 years lapse in-between, the connection joining the Europa and the Bayard. Us, starting a long career from a lightship in the Elbe river to sail the world’s oceans as a sail training bark, ocean wanderers now anchored amongst kelp forests; Bayard wrecked at the Eastern shores of the cove. Another witness of the whaling past of the island and the wild weather blasting along its coasts, over its glaciers and alpine peaks. On the 6th of June in the year 1911, her moorings in Ocean harbor couldn't hold anymore and fate drifted her to the opposite side of the bay where she run aground on the rocks. Her rusty riveted iron hull lie there ever since.

At the head of the bay, as further evidence of the whaling activities, the remains of a whaling station can be found. Despite its success, it was decided to be taken apart after ten years of service. In 1920, a company decision was made for Ocean Harbour and Stromness to merge, moving virtually all the implements and facilities from here. Modern equipment by then, as Ocean Harbour Station was the pioneer in applying the regulations in favor of using the whole of the catch to extract oil, not just the blubber, by the use of high-pressure boilers. A year before the beginning of the shore enterprise, the ship Ocean was already operating here, after which the bay took its name. A place with much to offer, cruising the shipwreck amongst the kelp and setting foot ashore where Fur seals thrive, an abundance of Elephant seals molt in their stinky wallows and Giant petrels nest.

“the connection” from present to past, fine photo, great words…keep up fine writing!