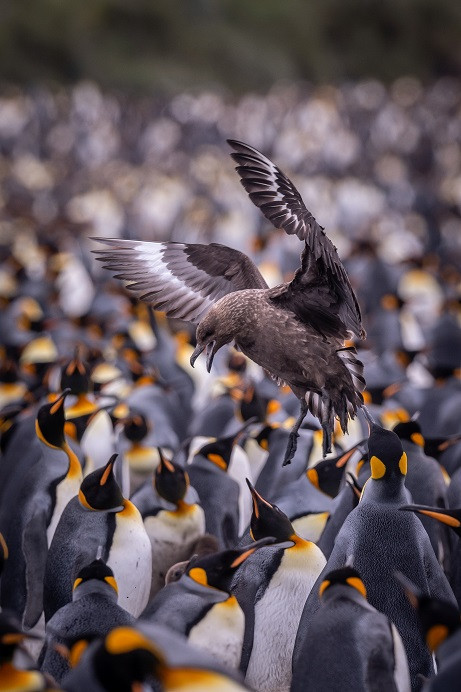 Yet another rainy morning in South Georgia.
After dropping anchor at the sheltered bay of Rosita during the night, it’s time to continue with more of the unforgettable South Georgia experiences.

Calm waters along Rosita Harbour coast made for a relatively easy landing, where a bunch of inquisitive Fur seal pups come close to check us.
Just about three months old, they are curious and playful.
Up in the gentle slopes some of the mothers are nursing their pups, the other youngsters gather in sort of kindergardens using small pools between the intertidal rocks as a recreation area.
Gradually, now that is getting late in the season, the females spend less and less time with them, until reaching a point when the young seals have to start looking for themselves.

Rosita is also home for many of the endemic Pipits.
The only nesting songbird in the island.
It is amazing to think that South Georgia, still located in the Antarctic Convergence Area, over 1200nm from Falkland Islands, about 800nm from Cape Horn is home for such a sort of bird.
Their populations have been heavily affected by the presence of in the past, just able to survive in areas free of them.
Nowadays, after the successful habitat Restoration Projects, they can be seen in many more places and their populations are growing, together with many other birds.

The harbour is not a usual landing site for other tourist ships, but offers great chances for hikes inland, and we took advantage of it despite the low cloud cover and the constant rain.
Now and then the large valleys and surrounding hills come off the mist.
There are no penguins rookeries here, but like that it gives a different perspective of the island, helping, piece by piece, landing by landing, to get a better picture of the island’s characteristics.

We walked in a scenery of hills, streams, small waterfalls, snow fields and rounded ridges, a landscape that tells us about its glacial past, when 15000 years ago great glaciers covered the land, on their way carving valleys and carrying rocks and sediments on their moraines.
Now they have retrieved, but their footprint is ever-present along the area.

All in all a bit of South Georgia in a nutshell, including the rain, wind, its rugged landscapes, its history of bloody hunting and its wildlife.

Salisbury Plain, just a handful of miles further away, is our next destination.
Home of the second largest King penguin colony in South Georgia its wide open shores are often swept by large swells or surge, and today is no exception.

Europa anchored for the duration of the outing right in front of the beach, with a massive outwash plain at the background.
This substantial flat area measure over two square kilometres, being the largest levelled terrain in the island.
Framing the scene, Grace and Lucas glaciers, the carvers of this landscape.
It all makes for a preferred rookery for King penguins.
Here their number rocket to about 60.000 couples.
A conglomerate of young chicks, moulting adults and incubating individuals.
Hard to believe the growth of the colony if we check the census estimations of 1912, when the rookery counted with just 350 pairs.

Curious as they are, together with their companies the Fur seals, groups of them approached the rough landing site to check what was happening at their beach with all those multicoloured visitors.
Walking along the crowded coast we gradually approach the main colony, a sea of penguins, standing shoulder to shoulder in a dense mass.
Above them, tireless Skuas dive here and there into the rookery in search of an egg or young chick.
More and more details soak into us as we spend longer time observing them and their doings: the different groups distribution, creches of young chicks, the youngest ones still under parental care, the ones lying on the single big egg incubated atop their feet, the ones moulting, predator birds flying in and out or walking off the crowded area.

A truly nature’s spectacle worth the tough landing and pick up on the rubber boats.

Very informative and interesting. Our daughter Andrea is on board with you on this voyage. Therefore my wife and I are very grateful for every information, particularly when presented so precisely. Thank you very much Jorgi