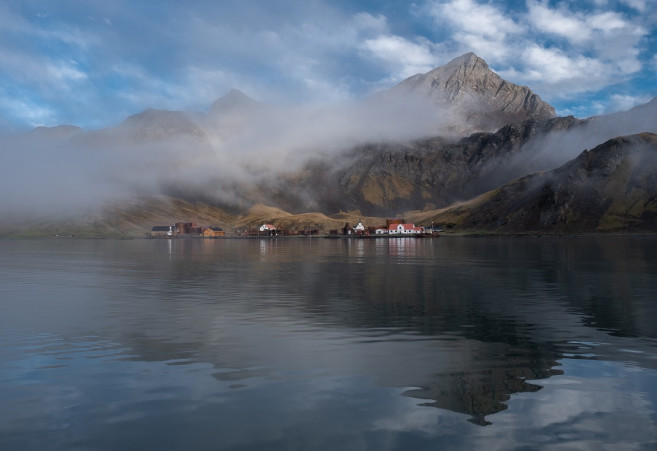 Rolling our way between Stromness and Cumberland bays, we arrive at the vicinity of Grytviken at night. Under Northeasterly winds, it is better to use the Eastern side of Cumberland to drift for a few hours until the first lights to get into Grytviken and drop anchor. Sunrise surprises us with fantastic views of South Georgia's highest mountains catching the first lights between veils of fog and low clouds.

The spectacular scenery surrounding Grytviken reveals itself while the whaling station remains in the mist. But not for long, as the sun heat gradually lifts it, disclosing first the scientific infrastructures and buildings of King Edward Point, then the remains of the whaling premises and museum.

It’s been a handful of days since Europa reached South Georgia and pay visits to several of its outstanding locations, but it is today when she will get the official clearance. That was to happen straight after breakfast and before we are allowed to set foot ashore here.

Once the official paperwork is finished, zodiacs are boarded to start the morning visit. First driving all of us to the local graveyard, where buried amongst many whalers that lost their lives during the hard times and dangerous whale oil rendering times, lie the remains of Sir Ernest Shackleton.

Glasses are handed, filled with the most appropriate beverage for the occasion, Shackleton Expedition Whiskey. Fellow traveler Ron made it for getting a couple of bottles of it and share the drink with all of us.
Not so long ago, 8 bottles of the original whiskey that the Imperial Transantarctic Expedition had brought to Antarctica were found. Its contents analyzed, it was possible to brew the drink once more and limited editions of it were to be sold. Today, with two of them in our hands we toast for “The Boss” in the centenary year of his death here, in South Georgia.

He died in 1922, onboard the Quest, on the way to yet another great Southern expedition. His body was already on the way North, when the wish from his wife arrived that he should be buried where his dreams had been his whole life, in the far South.

In the year 2013 Frank Wild’s ashes were located in South Africa and brought next to him. Since then Shackleton and his right-hand man rest side by side.

Our way continues along the remains of the town and oil factory, getting the impressions and feelings of how life and work were here. It is not possible to have a walk in any of the other whaling stations on the island, but Grytviken has been cleaned up and made safe to visit.

The story of the place starts in 1904, when Captain Larsen, well known for his expeditions both to Polar areas North and South of the world, settled down here introducing the whaling to the Southern Ocean.
We know his name well from previous areas visited during our journey, mostly for the sufferings and survival adventures when he was the Captain of the ship “Antarctic” for the Antarctic Swedish Antarctic Expedition (1901-03) to the Weddell Sea, together with Otto Nordenksjold. It was then, after making port at South Georgia, that he realized the commercial opportunity of whaling in South Georgia’s waters. He then established Grytviken, starting the company with Argentinean monetary support and 60 men and the whale catcher “Fortuna”. His great success opened the path for Norwegian and English companies to start the same business on the island with other stations where some shelter to the harsh weather conditions could be found.

Wandering around the area is soaking into South Georgia history, its business, its founders, its explorers, all converge here, amongst old buildings, oil tanks, rusting boilers, chains, anchors, and beached shipwrecks.

Amongst all them, was a church, built in 1913. Well-liked for many years, then its popularity plummeted. Quoting an old priest based here: ‘ Religious life among the whalers left much to be desired’… so it ended up being used to store potatoes or as a cinema. Nowadays it could serve its original purposes at request.

A visit to the Museum, a well-assorted souvenir shop linked with the South Georgia Heritage Trust, and a famous Post Office, ends the time to spend ashore, soon lunch will be served on board.

No time for a snooze, soon all is ready for a new activity ashore. The afternoon will be spent walking along the path that links Grytviken with Maiviken Cove, a scenic walk across the mountainous headland that separates both bays.

From the early whaling in South Georgia, now making our way to Maiviken we go even further back in time, as the place was a preferred one for sealers of the early 18-hundreds

Many Fur seals were hunted on the island for their exceptional pelt, their populations were brought to the brink of extinction. The sealers had terrific hard times during their activities, exposed to constant dangers both while living ashore and where sailing over treacherous uncharted waters, unpredictable stormy weather, gales, and howling winds and cold. Often, a group of them would be put ashore to spend days and even months in precarious conditions, living in small huts made of rock with a canvas roof, or maybe under an upturned rowing boat or a small cave if lucky. In the meantime, their ship journeyed to keep exploring new grounds.

The sealers' job consisted of slaughtering all the seals in the area, and skin and salt the furs to be stacked on board.
The path we take sure was used since those old times as an easy connection between two different beaches where to conduct their activities. Nowadays, visitors and scientists keep it well-trodden.

The scenery from the mountain saddles, 205m high above sea level, and a couple of viewpoints are quite exceptional. The panorama includes high glaciated mountains taking a peek amongst the clouds and Maivatn lake, in the Bore Valley. On its shores, we can see from high above a little hut built in 1974. Kept in good conditions, is being normally used nowadays by King Edward Point scientists.

It is from there that we retrace our steps back to Grytviken. This afternoon, Europa shares the bay with another ship, sure soon to become very well known, the “Aghulas”, a research vessel that just arrived from her successful mission of finding the “Endurance” crashed in the Weddell Sea Ice over a hundred years ago. The conservation state of the shipwreck is exceptional, after laying all those decades sunk under 3000m of icy water.

A fortunate coincidence for us, linking our visit to Shackleton’s grave in a day when the ship that just found such a coveted shipwreck shares Cumberland Bay and a walk around Grytviken with us, and all in the centenary year of Shackleton’s death.

Beautiful article, and what an incredible timing guys. Well done ! I am envious I have to say. Lawrence is onboard and I am getting a few email updates. Amazing really.