We sailed all night close hauled, as close to the NE-ly wind as possible, trying to point towards the English Strait, between Robert and Greenwich Islands, in the South Shetlands. We made good speeds around 7 to 8 knots on that unexpected winds of 25 knots. 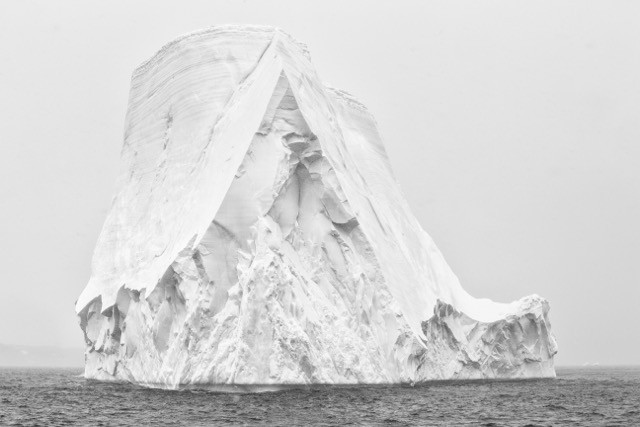 During the night Eric, Ruud and Jordi work out the timings and possibilities for the day, and it seems possible an early arrival to our first destination for a landfall at Barrientos Island, on the Aitcho Archipelago. Plans for the day change accordingly, and the second round of the IAATO talk is scheduled for right after breakfast, as our ETA (Estimated Time of Arrival) seems to be already slightly after lunchtime. The good sailing conditions last until 11:00h, when we start taking sails away. By midday all squares are already furled and we motorsail our way between icebergs and small islands getting into the English Strait, with the Inner jib, Dekzwabber, Monkey and Spanker set. Several icebergs appear around us, including a huge one as we get closer to and, welcoming us after the last days sailing the Drake Passage. All of us on deck enjoy our first close look at one of those giants.

Getting closer to Barrientos Island we still experience the snowy, cold and windy weather we had during all night, together with relatively low visibility and a confused sea, as here the oceanic swell meets the shallow waters of the continental shelf around the South Shetlands. At 14:30 we are dropping anchor in front of our landing site. From now on the guides and all voyage crew will be off the watch system, during the next days as we visit Antarctica, until reaching the end of our polar adventures and start our way North through the Drake Passage again. Soon we can hear the three bells calling all of us to the Deckhouse for a pre-landing meeting, where the guides explain what to expect during the landing, weather conditions and operational procedures. Afterwards we are all ready to set foot in Antarctica for first time during our trip. The crew had prepared the baths with disinfectant so we could clean our boots. These are all standard procedures nowadays on any IAATO cruise ships and research vessels. We didn’t have the best weather, but good enough to proceed with our activity ashore, even though it was a bit windy, cold and with snow showers, real Antarctic climate!

Skinner and Jordi go ashore first to scout the place and assess the conditions and soon we have the good news that we can start proceeding with the zodiac embarkation to head ashore.The Gentoo penguin youngsters still fashion their fluffy coats, ready to soon start growing their actual feathers. Until then they are still not really waterproof and don’t venture in the water. At this point they just hang around the beach waiting for their parents to show up from the sea to run after them demanding to be fed. In the meantime they became really curious about any kind of event that happens around them, like our visit. Instead of being afraid of humans, in fact they just approach us and check our bags, clothes and cameras, sometimes making difficult our walk, stopped often by those inquisitive chicks.

But after the first impression when we just set foot on the island, we start looking a bit further, and we can also see other species, like Antarctic shags, Kelp gulls, numerous Giant petrels looking for unattended chicks or weak ones, together with the everpresent Skuas. The rocky outcrops higher up the hills are home of small rockeries of Chinstrap penguins. Their chicks display a very different behaviour from the Gentoos. Instead of wander around everywhere, those ones stick to the areas where they were hatched and raised, forming groups of youngsters called “creches”, and they are not by far as interested on us like the previous ones. As their conduct is to sit still and get fed by their parents instead of running after them, they are very limited on their movements and now, on the second half of the breeding season, they look pretty dirty after more than a month just moving a few metres. Several Snowy sheathbills are also around, cleaning around the colonies and trying to catch the food that the adult penguins regurgitate in the chicks bills. Besides the busy parents feeding their chicks and the young penguins all around, having a closer look at the more quiet areas of the rockeries we could realize some areas where the already moulting individuals use to gather. Those penguins already finished with their chicks, or they had lost them and now they are not busy anymore, or they are just non breeders. And like every season they change their feathers, growing a brand new diving suit.

After a couple of hours walking around and spreading between the South and North beaches of this Eastern end of Barrientos Island, we start to feel the cold as the wind also picks up, and the zodiacs are called to pick us up and make our way back on board. Once on deck we are busy for a while cleaning our boots and clothes from the large amount of Penguin guano that we collected during this memorable first landfall in Antarctica. After dinner Captain and guides call us in the Deckhouse for the traditional daily meeting. There they show the charts to position ourselves better and inform us about our progress from last evening until drop anchor, 125 nm almost all under sail, in total we have sailed already 576 nm from our departure in Ushuaia. We plan to spend a quiet night at anchor, have the chance to have a couple of drinks, watch a documentary that Lex get ready for us about the humans in Antarctica, chat with everybody, get to know the fellow travellers better, work and share some of our pictures or simply have a good rest and be ready for tomorrow. Another great day planned for us, full of new activities, excursions, landings, wildlife and sailing.

Wow , thank u so much for your commentary, I feel I am there with you all (in some sense). I do not like the cold, so being there with you in your comments of your adventure is fabulous. Please tell Lindsay ( the Australian/New Zealander) I am thinking of him in his adventure with you all. Tell him to write a log report if he can, however you are doing a great service to the loved ones who did not travel on the ship with you. Bless you for you wonderful entry. Seems all the passengers are very nice people.Keep up the good work. Best Regards Rita from Brisbane.