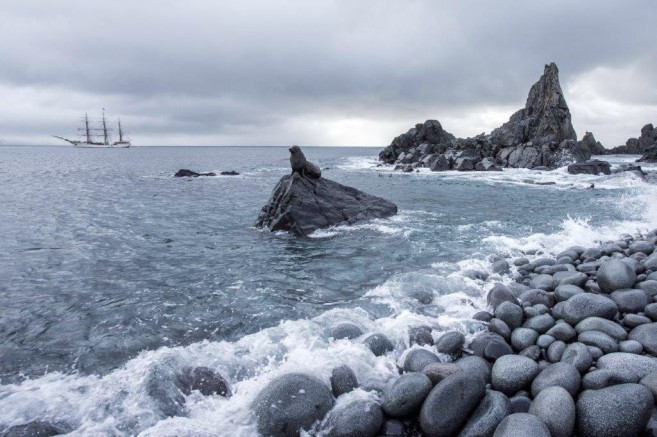 Heaving anchor at about 06:00h in the morning, Europa motors the short
way from her anchorage at Barrientos Island towards Fort Point. Although
facing strong W-ly winds, at breakfast time she was already looking for
a suitable anchorage on the NE side of the rocky point. By that time we
find ourselves surrounded by the splendour of Greenwich Island high
mountains and glaciers, while the overcast weather seem to open up for
us at our arrival and blue skies peek through the low clouds.
Fort Point got its name after the resemblance that the conspicuous
jagged spires of basalt (reaching over 100 meters in height) dominating
the landscape as with an actual fort. This formation is linked by a low
700m long isthmus to the calving glaciers of Greenwich Island. The whole
place is quite exposed to the whims of the Bransfield Strait, but today
looked like a perfect day for a landfall here. Despite the gusting winds
the shoreline was relatively calm, allowing for safe zodiac operations.
Setting foot ashore, this time the welcome committee counts with heaps
of Fur seals. Although those seals species were virtually exterminated
by the sealers, they did return to the islands where they were hunted,
and their numbers are recovering. About 95% of them breed in South
Georgia Island, and the rest in smaller colonies around the South
Shetlands. Why then so many are around the Antarctic areas at this time
of the year? What we see now are just big bulls or some non-breeders,
that migrate to Antarctica and now are having a rest in these quiet
waters after they finish their stressful reproduction cycle. Here they
recover from the fasting period they just had, trying to put together
harems and fighting with the other males. Females are still on their
breeding grounds nursing their pups.
The feeling of wildness given by all the wildlife around framed on the
imposing scenery is awe-inspiring. The breathtaking landscape is home to
Chinstrap and Gentoo penguin rookeries and several Elephant seals are
seen snoozing along the coast. The shoreline is festooned by bergy bits
and brash ice, coming from calvings of the neighboring glacier front.
After a delightful morning time with the penguins and walking along the
boulder beach, we head towards the imposing ice cliffs of this glacier.
Here is one of the unusual spots where we can approach a vertical
calving glacier just walking along the beach itself. Swell breaking
along the shore moves cobbles and boulders as the pieces of ice crash
against them rumbling while an occasional calving echoes in the
distance, resembling a canon shot.
Countless pictures are taken before we hike uphill through snow slopes
towards a neighboring “nunatak”, meaning a cliff which the island’s
glacier has eroded as it was flowing around it. Now it stands like an
island amid the field of ice. Some of us walked up the ring shaped
corridor created between the granite pointy hill and the ice itself,
formed by the heat retained on the dark rocks that melts the ice around
them. The view from up there is extraordinary with the whole Fort Point
area at our feet. Soon we make our way back to the landing spot, where
the zodiacs are ready to pick us up. Fort Point is a place of brutal
unspoiled beauty, not frequently visited.
As lunch is served, we start our 11nm way towards the spot where we plan
the afternoon activities, Yankee Harbor, on the Southern shores of
Greenwich Island.
While finishing our meal, Europa motors her way into this enclosed bay,
through the narrow entrance between a low glacial moraine and the ice
cliffs of Glacier Bluff.
The site owns its name to the fact that is was intensively used by USA
sealers who were after the pelts of the Antarctic Fur Seal and the
blubber of the Southern Elephant Seals around the 1820s.
The most famous sealer of all times, James Weddell, also visited this
bay on 22nd December 1821. As a witness of those old times, a single try
pot lies at the beach, used to render the seal blubber into the precious
oil.
The landing took place next to the tip of the glacial moraine that
dominates the area. It is formed by boulders and rocks that have all
been smoothened by the erosion of the sea and ice. Amongst them we could
also find a few patches of Antarctic Hairgrass - one of the only two
species of vascular Antarctic plants.
Numerous Fur seals lie scattered all over, several Gentoo penguins
wander around and Skuas look for a meal as we walk along.
The afternoon cold and rainy conditions made many of us return to the
ship after an hour and a half, being picked up close to a Gentoo penguin
rookery, while a few others decided to stay longer, walking further
along the beach. There, another spectacular glacier was waiting for us.
Making our way to its front we enjoy an open book of glaciological
features. Heavy melting of its surface drains to the sea on streams,
while big swell crashes against the dripping icy cliffs. We could even
set foot on the glacier itself on our way back.
Just 35nm separates Yankee Harbour from our next destination, the
volcanic caldera of Deception Island, where we plan tomorrow’s
activities. That allowed us to have a quiet diner at anchor, followed by
a photography talk by Daniel and Frits photo workshop, where our
pictures taken so far where discussed and tips given to improve our
skills. At this point it is time to select pictures of the Drake
Crossing, considered the first part of our trip and opening page for the
final multimedia project proposed by our photography team.