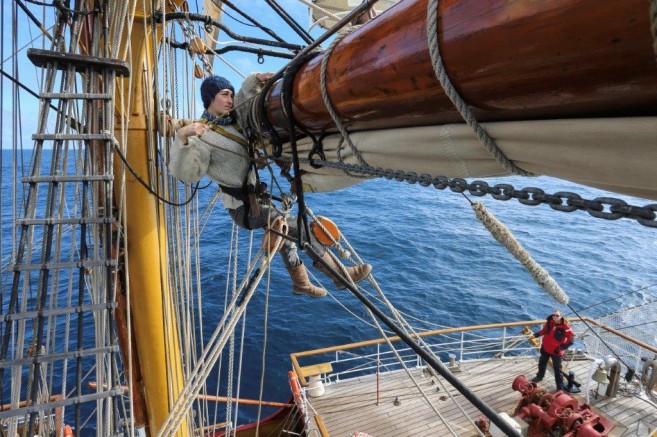 All morning we had light winds of around 10kn from the SSW, and we kept motorsailing with the top sails set on a downwind 040º course, keeping an average speed of 5.5kn.

As the weather is good and the sea conditions calm, the crew takes the chance to do some maintenance up the rigging and start preparing lines and blocks for more masts and sails to be rigged soon. In warmer and calmer areas, Europa can add skysails above the royals and studding sails to spread more canvas on downwind or close to broad reach sailing conditions. During the afternoon we sailed in calm weather, the wind barely blowing at around 3kn, but showing tendency to back, becoming S-ly. We kept the same sail configuration, motorsailing with just the topsails set, at a speed of 6kn on a good 035º course towards Tristan da Cunha. The air temperature had risen from 3 to 5ºC, but it feels warmer as there is hardly any wind.

At the same time the surface water temp began to increase. From 3.2ºC in the morning it came up by 1ºC at the next reading in the afternoon. This increase is most probably related with the Antarctic Convergence Zone, that we must be approaching. This area, the dynamic limit between the sub-Antarctic temperate waters and the cold water mass from the South, bends northwards over South Georgia, reaching lower latitudes than when we crossed the Drake Passage quite a few days ago. There the Convergence fluctuates approximately between 59º and 60ºS. Here it can even be found around 49º to 51ºS. Last days we were under the influence of a big low pressure system that has been moving Westwards. Today the barometric pressure increased, but checking the forecast, there is another one ahead of us.

As one is passing by and the other coming, the wind is forecasted to increase and back, becoming north-easterly for a while in the next hours. With this weather change, we will even have to sail on a north-westerly course, on a heading away from Tristan, trying to get the fair winds at the back of this new low as soon as possible. For the moment we still steer towards this remote island, having motorsailed 143nm in the last 24h from yesterday’s 20:00h to todays. At the moment 1140nm to go.

During the night, the wind, even though still not blowing hard, starts to gradually increase and back, first becoming south-east. The ship is braced sharp on starboard tack, waiting for the wind to increase. Before midnight, south-east became east and the wind was slowly increasing, allowing us to set more canvas; the spanker, middle and upper staysails are set and also the inner jib on the head rig. We keep motorsailing at over 6kn on a 40º course while the sky is progressively becoming overcast, but still allowing us great views of the almost full moon lighting the rig. Several constellations and the bright Jupiter are shining over the horizon. The Navigation course kept going on with a couple of talks during the day. Now it already involves the voyage crew watches to fill up a navigation log and they start trying to fix our position by the traditional method of dead reckoning.

The guides also repeated yesterday’s lectures about whales and kelp. Not much wildlife was spotted today around the ship, but we can add a new species for the trip: the Sooty albatross, with its elegant black suit and skilful gliding flight. These smart looking birds can be seen in the South Atlantic, Indian and Southern Oceans, their greatest numbers found at the Tristan da Cunha Archipelago. Also breeding in much smaller numbers at Prince Edward, Marion, Crozet, Kerguelen, Amsterdam and St. Paul Islands. Jordi