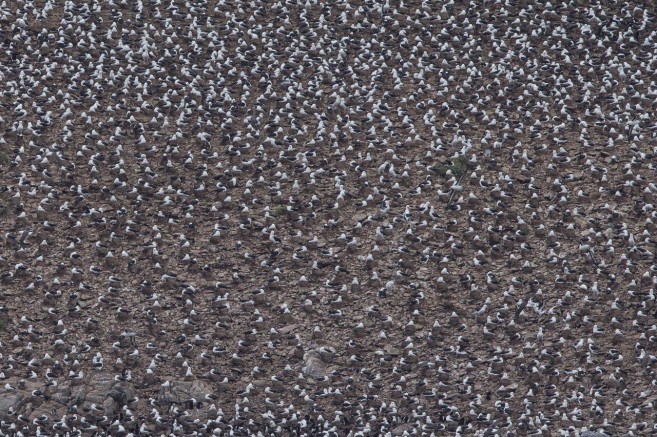 After a quiet night, we were ready this morning for our first visit ashore.

Yesterday we sailed pass the sheer cliffs over the raging seas sea on the exposed West side of this so called “New Island” while the sheltered open sandy beaches in the east, offer several good spots for anchoring. Eventhough we could hear the wind hauling during the night and early morning, the conditions were still pretty good for the zodiacs and landing operations.

After breakfast, we were about to land at the Southern part of New Island, the most remote of all the inhabited islands in Falklands, and a Natural Reserves owned by WCS (Wildlife conservation society). The nice couple Charlene and John Rowland are in charge of taking care of it, as they live here all year round. Regularly they also host scientists eager to study the nature of this bountiful island, that in fact contains one of the largest concentrations of wildlife in the Falklands.

The place has been a relatively popular landfall for smaller expedition cruise vessels since 1970, but it has a long and interesting past, dating from the early times of sealing and whaling. Besides that, the history goes as well by a small group of people marooned in South Harbour (where we plan our morning activity) in the early 19th Century. Excitement was in the air and the high expectations for setting food ashore, soon made us get ready early in the morning.

Landing here was a new experience for all of us, including ship, crew and guides, who had been in Falklands in several occasions in the past but never visited this great spot. Zodiacs soon drove us to “Coffin Harbour”, where the small settlement is located, and right above the landing beach, first building we find is the Barnard Memorial Museum, built on the remains of the stone shelter of Captain Barnard, who arrived here on the sealer Nanina in 1813, and were stranded here for a few months. There Charlene was waiting for us and showed us around, opening for us a small souvenir shop as well.

The location is spectacular: grassy meadows in the background, white sandy beach patrolled by Kelp geese, caracaras flying around, Turkey vultures gliding over our heads and Night herons perched on the picturesque shipwreck of the Protector, beached here. Built in 1943, she arrived in Falklands in 1949 to work for the sealing industry, then as a freighter between the islands, ending her life in 1969.

Approaching with the zodiacs to the beach, we could also see the bow of the Glengowan sticking off the water. This is other wreck in settlement harbour. With her iron hull, an unlucky turn of events made her catch fire during her maiden voyage, on Stanley in 1895, while she was loaded with coal. In 1910, her remains were towed to New Island to be used as storage for the operations of the South Harbour whaling station.

When the museum visit finished, Charlene offered to accompany us along the path that leads to the top of the 170m high cliffs overlooking at the ocean on the western side of the island, area that is home for countless Black-browed albatrosses, King Cormorants and a large rookery of Rockhopper penguins.

The scene unfolding for our eyes is breathtaking. After being at sea for 10 days, now we hang around stretching our legs and taking heaps of pictures closeby to Black browed albatrosses lying ion their nests, taking care of their egg, others displaying courtship behaviour. Mixed with them the ubiquitous Rockhopper penguins climb up and down the steep slopes going back and forth from their nests as well. Some elegant King cormorants with their feather tufts adorning their heads and deep blue rings around their eyes are also incubating. Actually their main colony lyes a few meters away on a clearing of the  extensive tussock grass patches. Fluttering above those colonies, Skuas and Striated caracaras seek for any chance to get a morsel stealing the eggs of the other birds.

After spending a couple of hours in this area we returned to the landing beach to be picked up by the zodiacs and return on board for a week deserved lunch. This time along with the island locals, Charlene and John, together with a young Germans scientist that is in the island studying the Thin billed prions that nest in thousand here.

Richard Mckee and his family (Flora, Hamish and Miranda) four new voyage crew members, joined us here, and will be with us during the next days until mooring at Stanley, the Capital town of Falklands. Living in town, they managed to get to New Island on the local small planes that transport people and goods between the myriad of islands that compose the Falkland archipelago.

After our meal, Europa heaves anchor and looks for a new spot a couple of miles northwards in what is called “Ship Harbour”, where we plan the afternoon activity ashore.

New Island offer several landing spots in a variated terrain and characteristics, making of the area great spot to spend a full day or even more. The sandy pocket beach at the Northeast side of the bay is a great spot where to land, and soon after the anchor goes down all is ready to go. This time the hike brought us across grasslands densely occupied by the Prion and Magellanic penguin burrows, leading to a saddle overviewing “North Harbour beach”, with its water ponds. This beach was also home for sealing operations in the early 19th Century.

From there we kept walking over levelled terrain to a striking Gentoo penguin rookery. Located at the top of the opening between North Bluff and the rounded Bold Hill, has fantastic views over great part of the island. From there an open valley offer good access to the sea, along a delightful white sand beach. There we could see large gatherings of Gentoo in the water, not daring to come ashore as consequence of two big Sea lions patrolling the coast waiting for them. Here is quite common that those seals hunt and feed on them. Numerous Giant petrels linger in the sea expecting to catch some leftovers when a kill takes place.

On shore Flightless teamer ducks and Snowy sheathbills rest, and half way uphill Striated caracaras and Magellanic penguins are at home. Climbing up the slopes, our guides lead us to the impressive cliffs of North Bluff. Down below, furious seas break at their base, contributing to a magnificent and captivating setup. Those rocky faces are used by the charismatic birdlife of the island to settle their nests. Again we find ourselves immersed on the apparent chaotic colonies of the attractive Black-browed albatrosses, mixed with Rockhopper penguins and King Cormorants, before heading back to the landing beach.

Tonight we plan to spend the night at this anchorage, leaving tomorrow early morning towards Jason Islands, the Northwesternmost islands in Falklands. A promising wind forecast may allow us to make our way under sail all the way there. As usual in Falklands and South Georgia, we darken the ship overnight due to the local large population of Thin-billed prions and other seabirds. Sometimes they get disoriented or attracted by the lights from the ship, ending crashing against the rig.