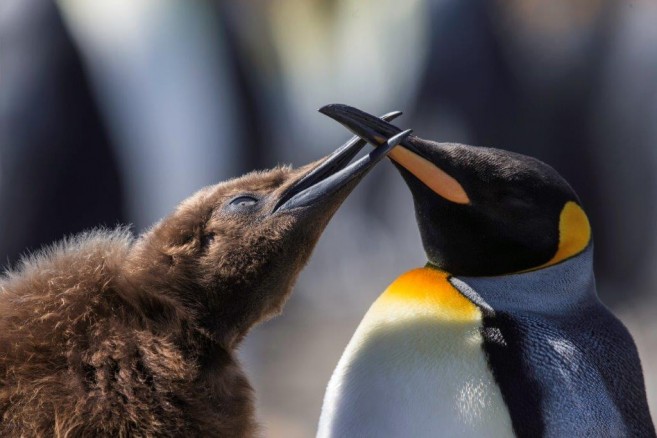 29th November 2017   ST. ANDREWS BAY. Sailing to Southern South Georgia. The return of the whales and large flocks of birds to the island.

Ocean harbour anchorage proved to be good and safe.  Under calm winds and a starry sky we spent last night, in sort of brotherhood with the old Bayard wreck. In the morning, under blue skies and sunshine, we just had a short distance to cover until reaching the wide open beach of St. Andrews.

As we slowly approach, this fantastic place reveals its grandeur. The scenery is impressive. Mount King, Vogel Peak, Smoky Wall and Mount Patterson (all part of the large Allardyce mountain Range) encircle the coastline, with their vast glaciers Buxton and Cook Glaciers framing the wide open plain and the shores teeming with wildlife.

Its not just us admiring the landscape, but a full flock of Snowy sheathbills perch on our bowsprit to enjoy the view on board our legendary Ocean Wanderer.

The clear skies slowly grow some clouds over their summits when we landed. St. Andrews is famous for many things, mainly for its incredibly large king penguin rookery, but its also renown for the often foul landing conditions. In spite of looking pretty good for an easy landing, caution has to be taken to operate in that area, prone to big waves, surge at the shoreline, sudden weather changes and exposure to katabatic winds.

Once on land at the northern corner of the beach, the most incredible nature play is broadcasted live in front of us.

Some Fur seals are around, but now and here the kings and queens of this beach are the countless Elephant seals spread all over. Not just myriad of weaner pups are far and wide over the seaside, but some small harems as well. Self-confident beach-masters try to keep their females together as the mating time has arrived to those late breeders. Most of these females are still taking care of 2 to 3 week old pups, and now are becoming receptive again. Several smaller males are around, trying their luck to score, while the huge beach-master is snoozing or busy with some other lady.

Not to mention the limitless numbers of King Penguins all over the place, as far as the eye could reach.

Crossing a meltwater river from the Buxton glacier, that extends its leaning front at the background, we approach the main rookery. Moulting King penguins are all along the knee deep stream, so special care have to be taken not to disturb them.

As we reach a hilltop at the end of the long beach, one the most breath taking nature’s scenes in the world unfolds in front of us.

The glacial valley opening at our feet is swarming with King penguins. Brown chicks on different stages of growth are mixed with colourful adults in a tapestry like pattern, framed by the swell crashing against the coastline, glaciers and sheer mountain faces.

It is difficult to explain the greatness of such nature’s opulence. And sitting in the sun, we better enjoyed it in silence. Gradually our mind has time to change scale from being overwhelmed by the grandeur of the panorama to pay attention to smaller details. With our senses fully overload we have time to soak ourselves in what can be a life changing experience.

A couple of hours passed by on what seemed be just a few minutes, and soon it was time to make our way back to the landing site.

St. Andrews has proven to be a fantastic farewell and grand finale for our successful days of landings at South Georgia. In fact is considered one of the epic places on the island and a place never to forget. But not all was done yet, we still have an afternoon sailing program and other activities await us for tomorrow morning.

After our meal Europa heaves anchor and start her way southwards, to drop anchor close to the southernmost corner of South Georgia, where we plan to spend the night.

On our way we could enjoy a gorgeous sunset, with the low sunrays shining over the glaciers and high mountains. Before dinner some whale blows are spotted at the distance, and having time enough to spare we steer the Europa towards them. Soon many more blows could be seen against the warm evening low light. We came across a pod of Humpback whales, feeding in the rich waters of Southern South Georgia. Here the shallow waters quickly drop to the deep ocean, together with upwelling of deep rich waters and the mixing of different surface currents, producing an abundance of nutrients. Krill and small fish takes advantage of them, and this ends up attracting large flocks birds. Fur seals are also aware of this fact and could be seen feeding in great numbers in the area. But the most impressive sight were the heaps of Humpback whales having an evening meal.

It really seems that the whales recover the island as their feeding grounds. After many years of not being commonly spotted, lately they start appearing again. Their populations have been decimated in great extend during the whaling era, that shaped the island, many of its landscapes and the ecosystem itself, but now they are recovering their kingdom. Even though South Georgia has greatly surprised us with its nature’s bounty, we can just imagine how the island was before the sealers and whalers started their activities on the 18th Century. The abundance of wildlife should have been even more mind-blowing by then, but luckily, the island now seems to be recovering its old splendour. Great effort on manpower, time and funds has  been invested on its environmental protection and in its habitat restoration. And after several years of hard work nowadays we can ascertain the fruits of this tremendous endeavour. Not just the whales can thrive again on the South Georgia waters, at the present time cataloged as whale sanctuary, but many species of birds flourish once more. Thanks to the admirable and successful rat eradication project conducted during the last few years, the abundance of birds like Prions, White chinned petrels, Pintails and the endemic South Georgia pipits, are considerably increasing. And as a confirmation of that, while being amused by the many Humpback whales around us, clouds of Prions flutter all around in impressive numbers, feeding together with those ocean giants.

Soon during the dark hours, they will make their way back to their burrows in the tussock grass covered slopes of South Georgia.

High glaciated peaks of the island topped by impressive lenticular clouds frame the setting, offering an spectacular background for the end of this great day.