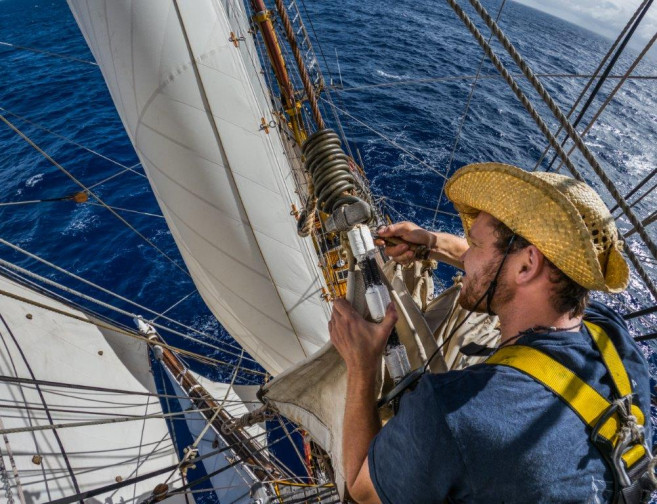 After sailing 148nm during the last 24 hours, the closest land, the Brazilian Archipelago of Abrolhos, lay 150nm to our Starboardside. Several groups of islands, emerged rocks and reefs here and there all around the world’s oceans bear this name, literally translated as “open your eyes” or take care and keep sharp lookouts when sailing closeby. They usually barely rise from the sea bottom, relatively far from the coastline in what could be considered unexpected locations, and sure presented a hazard for navigation in the old times of sailing.

Not so far, a much less dangerous oceanic feature towers from the otherwise featureless deep sea floor: the Hot Spur Sea Mount, submerged undersea volcanic mountain with its top about 150m below the surface. Interesting from a geological point of view, but also for the biodiversity it hosts. The thousands of sea mounts scattered all over the world’s oceans, often isolated and away from lands, provide habitat for marine life adapted to shallow waters. Furthermore they produce upwellings of deep colder and nutrient-rich waters in the otherwise pretty barren open ocean. Rich surface waters feed the phytoplankton, which is the base of the food chain at sea, ultimately attracting marine mammals and shoals of fish. And with them, the fishing fleets from all over, intensively using this areas.

With 1570nm ahead of us and enjoying a great sailing day, the ship heeling to Starboardside, braced sharp on out tack, soon we leave the sea mount and the group of islands behind. A journey catching the good steady breeze of 15 to 18kn, but often having to face the passing rain showers, that repeatedly cross our path with their associated wind increases and changes. Skysails are lowered and set in a couple of occasions, same as dousing and pull up again the Flying Jib, and even a longer lasting squall made for a short while of sailing under the squares just up to the Top Gallants.

During one of the intervals of fair stable breezes, the Vlieger is unfurled and when ready to be hauled-up and sheeted, some rips and wear and tear areas were discovered. Enough to be in need of repair. Soon its lashings and sheets are cut loose, halyard detached, and is brought down to deck hanging on its downhaul. A brand new sail is fished up from the stash in the lower fore-peak and readied on the main deck to be bent-on. Still newly packed straight from the sailmaker, first need to be branded and properly measured before brought aloft. By the night time, with the half moon shinning amongst clouds and the Southern Cross constellation showing itself low in the horizon at our Port bow, the new Vlieger is ready to be set under a steady Easterly breeze.