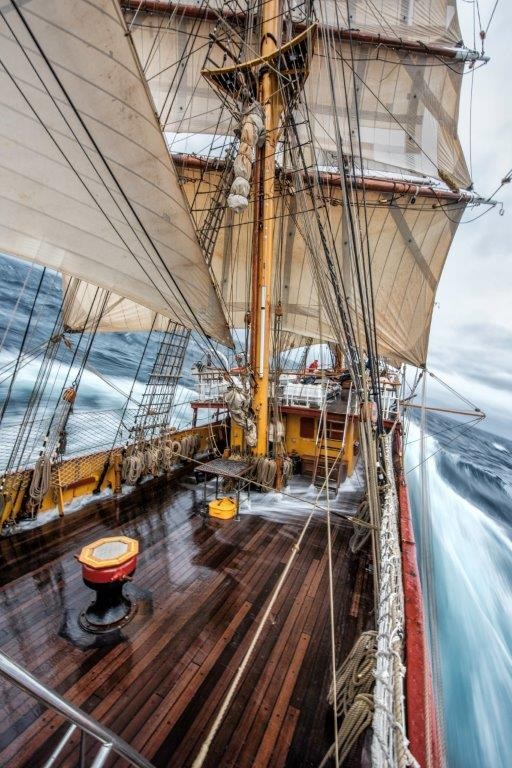 The forecasted wind shift expected by yesterday in the evening didn’t happen until early this morning, just before 05:00h AM. Before the shift, we sailed on easing breeze for a while, passing a
squall line that came with rain but not associated strong gusts. Then, in a rapid change, wind backed all the way from NW-ly to S in about half minute, followed by a rise on its force, soon blowing again
between 28 to 30kn. Time for some manoeuvres on deck to keep a good course and speed. A quick call for the watch was followed by wearing ship. First we come up on our course and start sailhandling. First sail to come down was the Spanker, followed by dropping Courses and Lower and Middle Staysails. Bracing came next, starting with squaring the Fore Mast, then bracing Beam reach the Main, and then finishing bracing the Fore. The sheets of the Fore Rig are pulled tight and the sails passed to the other tack. Setting the Courses came next and there we go, with the Europa on a
Starboard tack speedy ride. 9, 10, even 11kn occasionally pop up on our GPS, running with the wind and swell on Beam Reach. Having the modern technology of iPad navigation program in front of us
while steering the ship and taking the courses dictated by Mates and Captain, a quick glimpse at the magnetic compass can surprise us. The huge volcanic building of Tristan, rising all the way 5000m from the sea floor (2060m of them above sea level), contains magnetic ores that give rise to local magnetic anomalies resulting in the temporary deflection of the compass needle when passing close or over them. This shows as an effect permanently superimposed on the earth’s normal magnetic field and characterized by abnormal values of the elements of compass variation, dip, and geomagnetic force. The volcanic mass and its composition have a strong influence on the earth magnetic field of several degrees, increasing the normal magnetic variation (the angle the magnetic meridian makes with the true meridian) by 14º in the vicinity of Tristan da Cunha archipelago only settlement (Edinburgh of the Seven Seas), specially getting to anchorage site. The good sailing day and night, will mean an early arrival to the island shores. A good indication of having land not so far away is the presence of some coastal birds. Less pelagic than albatrosses and petrels, Tristan Terns and Skuas were spotted during the morning. The latter ones are a sub species of the Antarctic skuas, well known by all of us after the days we spent in the white continent and South Georgia, where they
are an every day sight. But Tristan’a ones are actually yet another of those island’s endemism, with their nesting grounds just restricted to the archipelago plus Gough Island. Same characteristics are followed by the subspecies of Tristan Antarctic tern, common visitors of the ships approaching the islands and usual companions while hiking along the coast. The increasing rough sea and wind conditions in the afternoon decreased the amount of wildlife sights, making for an afternoon when our decks were often washed by the waves, that also increased the rolling movements of the Europa. But nevertheless she doesn’t want to slow down her pace towards Tristan, keeping for most of the journey a good 9 to 10kn.

And at that speed, under the moonlight we sail between Inaccessible and Nightingale islands, while Quenn Mary Peak, the Tristan da Cunha volcano, towers above the rest of the nocturnal landscape in front of us. Looming over the Southern Atlantic waters and the islands that here and there pepper this ocean with its 6760ft in height, it can be seen from far away on good visibility days. Often is crowned by clouds, as the moist of the winds sweeping over the ocean condenses on its higher slopes, and always offers an impressive perspective to the ships that approach its steep green shores.
Still as we get closer and closer to the anchorage located at the NW of the island, in front of the settlement Edinburg of the Seven Seas, the wind seems to increase. Time to drop sails and start furling. When we approach the lights of the settlement is  the only canvas left are the Topsails, that soon come down as well. 38kn of wind made for a bit of growing concern as draw nearer and nearer to the anchorage. Is not until just the last moment that the coastline offers lee from the SSW-ly strong winds. Suddenly winds drops, surface of the ocean calm down and conditions look great for dropping anchor. Here we will stay for the rest of the day and whole of tomorrow, while attempting our visits and hikes in the remotest inhabited island in the planet.