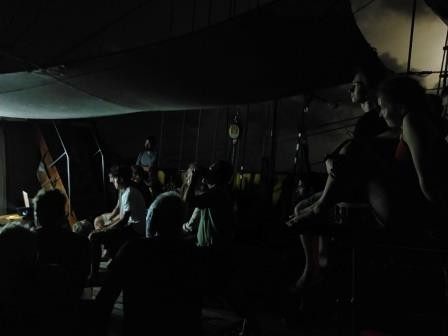 It's good to see the sky again. Now we just need to get rid of the engine and set sail! One can only tolerate that much greyness and enginenoise before getting a nervous twitch. I think by now not only I am impatient. But the wind just will not move from it's Southerly direction, not even the smallest of degrees, no matter how intensely I watch the wind meter in the wheelhouse or the flag outside. Inspite of all the forecasts saying otherwise. So we are motorsailing, still, and waiting, as we have been for what feels weeks but in fact is not even seven days.

For all the boring motoring it's been an interesting set of doldrums. The radar screen has rarely been anything other than covered with patches of yellow. And yellow means the radar waves picked up something solid enough to bounce back. No icebergs in these latitudes. No land. No
ships. Just rain. Plenty of it! In between we had the odd tropical night with a sky full of stars, and we rigged an outdoor cinema, watching the famous Around Cape Horn movie on deck. It's a must for anyone who has even the smallest interest in being a sailor, and the best way to prepare landlubbers for what happens at sea.

Under the full moon, everyone sat in awe, munching popcorn, witnessing the voyage of the great Peking battling the elements around the Horn - and her limp sails in the same latitudes we are in now. These are also the latitudes where hurricanes are born, starting off as tropical waves at the African coast, heading West. Those tropical waves are different from the standard squall. They are more like fronts, and the entire sky turns grey and thick with clouds. Usually they bring a change in wind and a lot of rain with them. The first one passing us was only wet.

The other night another THING whatever it was approached, turning more or less the entire radar screen yellow. We already were under engine, with only staysails set, but to be on the safe side our watch took down the highest staysails as well. One never knows. We sent the dogwatch to
bed at four, still dry, and shortly after the rain came. More like a flood. Two hours later we were still in the same "squall", now entirely drenched, when a vertical line of squalls appeared on the radar, looking more like some sort of front. There was no tropical wave forecasted, but the sky was now black of night and clouds and rain. Then the wind started increasing, 20 knots, 25, 30. We removed the middle staysails. 35, 40, 45.

At the helm I asked the voyage crew to steer a downwind course to keep things a bit more stable, while the crew took in the remaining sails. All sails now gone, and flapping in horizontal rain, the crew rushed up the masts to furl the complaining canvas, including the Bosun, who went straight from his bunk up to put a gasket around the Royals and Topgallants. Also captain Arian got woken out of his sleep to look at our surprise storm with winds Bf 9 and 10 in gusts. There was not much left to do than tie up and continue, waiting for IT to pass.

So there you go, Doldrums do not always mean no wind! Fortunately, they mostly do mean no waves, and we had such a cruisy "storm" no one else woke up.

Greetings from 7°48 N 26°06W
Ninja, Mate
PS It turns out that the THING was part of a Monsoon Trough.

Picture: Open air cinema on board, watching the famous Around the Horn by Ninja Helmling