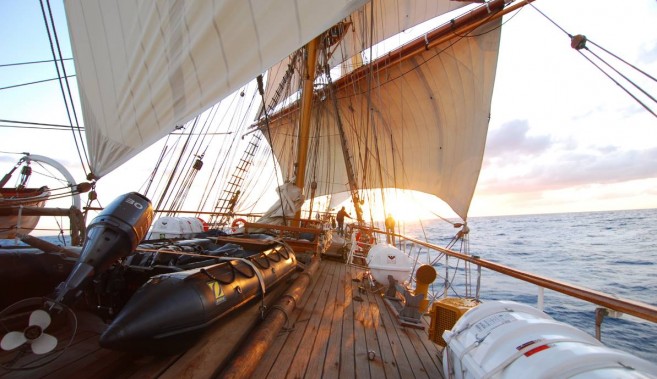 4 am- start of the Day Watch. Rain spattering on my hood and face, shorts soaking wet, feet dry in neoprene boots. I'm shaking my head in amazement. How did I ever come to be here, at the helm of this sailing ship, holding a course south through the Atlantic, some place halfway between Africa and South America? In the rain and dark, with a choppy sea, and the sails furled, moving through this immensity? Not a scene I ever imagined for myself. It's great to be surprised by my life.

I've been on board a little over two weeks, since Tenerife. I've never been a sailor; never handled a line nor trimmed a sail nor steered a course before. There are nine zillion things to learn on a big ship like this one. The names of lines, how sails work, how to turn on the shower, who my shipmates are, and on and on. I've learned a few of the nine zillion so far, the main one being how to function (sleep, eat, walk, think) on a constantly moving surface. One hand for the ship! A couple of other things I've learned: how to tie a bowline, how to steer a course--in incremental turns of the wheel!-where in the sky to look for Mars, how the horizon is my friend if I'm feeling woozy.

I'm pretty sure I have the names of all the sails. And I've discovered just how much constant, enthusiastic maintenance goes into Europa. Every sunny moment, it seems, there are teams of people sanding railings, varnishing benches, tarring lines, sewing (a big industrial sewing machine has appeared from--where??), knotting, splicing, painting. It's like the most complicated house you can imagine, one that is endlessly exposed to seawater. That much maintenance. So, another big learning for me is humility in the face of the intelligence and energy that keeps this ship afloat.

The clouds are tearing apart, a little light visible in the east. Rain has stopped. Sun will rise in an hour. Len and Lara arrive to relieve us on the helm.The deck is slippery, and I stagger along the rail toward the deckhouse, grinning.