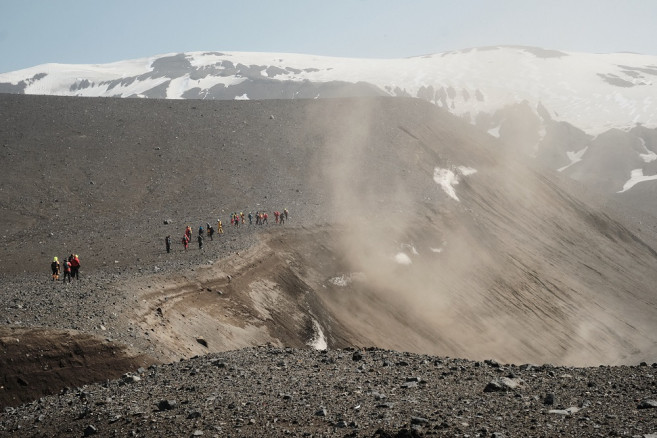 Nathaniel Palmer, sailing the small and manoeuvrable Hero (50 feet, 40 tons) on the 15th November 1820 set sail from the area between Smith and Livingston Islands, where a small sealing fleet was based.

He headed South and West and soon saw an island that, oddly, had less snow on it than its neighbours. He made his way along its eastern shore which was straight as a ruler but too rugged to land. At the southern end was the massive bluff of Bailey Head and beneath it a beach which, even today, in tough inflatable powerboats, is a trophy landing.

The afternoon of 15 November 1820 was not a fine day. Snow was blowing up into a storm. Palmer felt his way down the coast and, at 20:00, finding no shelter, he stood off to ride out the night. At five next morning he continued to where the cliffs had a bite out of them, before they reared up again in gigantic cliffs teeming with pentad petrels with irregular white flecks over the wings like paint spills. In mid-morning a slot-like gap opened in the coast and turned to starboard, rust-red rocks to his left. instead of ending inn a gully where one or perhaps two small ships might take precarious shelter, he found he had sailed into one of the world’s great natural harbours, up to five miles across. It is shaped like a horseshoe that has bent almost wholly closed. He named the entrance Neptune’s Bellows, and the island whose shape had fooled him Deception Island. In thick weather he went ashore and climbed the south facing crags to the bite in the cliffs, and named it Neptune’s Window. Mobbed by petrels, he collected eggs and trained his superb eyes one the south and east. On the horizon he saw land. Soon he would sail there and find land which proved to be the Antarctic mainland

He had just discovered what is nowadays one of the most famous and visited places in the whole of Antarctica.
Its large natural harbour is called Port Foster, and today, like when Palmer sailed in, is only accessible through the narrows of Neptune’s Bellows, leaving the high cligffs of Cathedral Craggs at starboard side, while on port lays the submerged hazard of Raven’s rock. By the early morning, Europa head this way. Just before having to carefully manoeuvre under increasing winds in that precise area, Top sails, that have been pulling us overnight, are doused. Squeezing into the narrow entrance of the island, she started to feel the strong winds and fierce gusts that today blow in Deception.
The island, considered flooded caldera of a still active volcano, creates its own kind of weather. For one, it usually hides under fog and clouds, one the other hand Port Foster often collects the winds falling from the surrounding mountains shooting down to the sea with great force. In days like today, the winds, gusts and blows in the inner part of the caldera are stronger than in the open waters of the Bransfield Strait.

Facing those strong Northwesterlies, we make way to the picturesque Telefon Bay, where the morning landing is planned and actually the only good shelter to be found today in Deception. There we drop anchor in front of the small cove of Gonzalez Harbour, where soon the rubber boats make their way in its blue-green lagoon.

After its recent volcanic events, now the area is formed by several small craters, some flooded by the seawater others collect the melting snow and ice from the upper slopes. The higher coastal volcano is the so called Cross Hill (160m above sea level) and a hike around its crater is the goal for the morning. From its top offers one of the best views of almost the complete Port Foster and the maze of ponds, bays and colourful lagoons that distinguish this part of the island.

Nowadays disappeared, a wooden cross erected at the summit by whalers gave the mountain its name. The moonscape is unique, barely any vegetation has started to grow here. Volcanic pebbles, sand, dust and ash fly today swept by the strong winds over the barren ground. Sun shines, haze over the horizon and full force blows and gusts. A morning to remember, braving the rapidly increasing wind as we all gain height up the mountain, even barely able to stand as reaching the top, all in the frame of the remote volcanic scenery of this Antarctic Island.

The wind kept blowing all day long in Deception. 30, 40 gusts of 45kn didn’t stop. Conditions were much calmer though in the anchorage Europa hold on in calmer conditions. After an early dinner we are one our way again to check the weather situation at Whalers Bay.

Close to the island’s entrance lay the remains of that whaling station, Hector was its name. Built in 1912 it was processing whales until 1931. The remains are dwarfed by the surrounding harsh landscape. Barrel staves, boat huts, shelters, water boats which task was to ferry water to ships and boilers, oil tanks and decaying buildings are scattered along the beach.

After the whaling period was over, the life of the station changed. From the bloody business of rendering oil, to a completely different usage related with the establishment of the English Operation Tabarin during the Second World War, with the top secret task of monitoring any possible German Naval communications in the South Atlantic and Southern Ocean.

The Falkland Islands Dependencies Survey (FIDS), the former British Antarctic Survey, was the last one using the huts, now for scientific purposes. They also built the largest building to see in the area, at the northernmost part of the bay. A Hangar for housing an aeroplane. The first ever flight in Antarctica was made from there, on the 16th November 1928.

In 1969 a lahar eruption swept hot water, ash and mud over the Station. That was the end of its human occupation and the beginning of its decay. Now declared a Historical and Antarctic Heritage site, the remains and ruins are left to the nature and its elements as an open air museum.

Fierce winds and gusts made for re-thinking the chances to go ashore. We were all on deck, warmly dressed and with life-jackets on. Zodiacs were readied. But the conditions seem to deteriorate by the minute and at the end is clear that we will have a good look at Whalers Bay from our decks, leaving afterwards to the open waters of the Bransfieldc Strait.

Passing again through the Neptune’s bellows first, then Deception Island falls behind, an island with one of the richest Antarctic History. Every human activity that ever happened in Antarctica has happened here: exploration and early discovery times, sealing, whaling, spying, science and flying.

Once out at sea, we found Northwesterly winds, good enough to set Upper and Lower Topsails to help the engine on our progress across the Bransfield Strait to the shores of the Antarctic Peninsula.