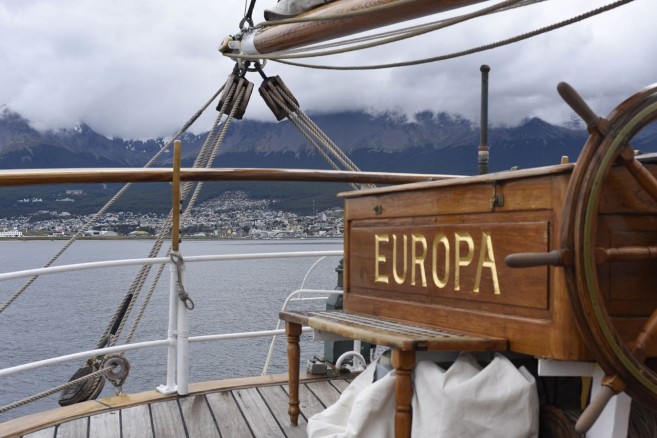 As we drop anchor 03:30 the sea watches change into anchor watches. When the sun slowly rises, we notice we are surrounded by green – a green that hits us as very intense after our weeks at sea and on the white continent. From around 6 o´clock the smell of eggs and bacon rises from the galley, promising another beautiful breakfast. Shortly before 08 the pilot comes on board and we heave anchor and start our way to Harberton.

As we reach Harberton and drop anchor, dramatic grey skies change quickly to sunshine and back.

Each small tourist boat on the way to the harbour passes closely by the ship – all tourists eagerly making photos. One of our voyage crew sighs and remarks: "so this is how it must be to be pretty".

At 11 the three bells gather us all on deck. If we want, we can go ashore and have lunch in the restaurant up the hill that opened a few years ago. This is the only building that has been added to the original lay out – otherwise the estancia has virtually remained unchanged since its construction in 1886. More than half of the voyage crew opted for lunch in Harberton and were shuttled to the shore by Mafu, for whom it was a return to his home, or, at least one of his homes since the family has a few properties in Tierra del Fuego. Some people stayed on board, stating they would not want to miss any of Marianne´s lunches.

At Harberton a couple of people enjoyed a guided tour around the settlement, which included the garden and graveyard. The main attraction was the Museuo Acatashún, an initiative of Matthew's grandmother Natalie Posser-Goodall, who founded here a home for the skeletons of marine mammals and seabirds that were found around the coast of Tierra del Fuego. The museum has skeletons of every single whale of dolphin that lives in the area, and a large collection of bones on display, many of which can be touched for examination. Because the museum is not just a static place to look at objects on display, it is very much a study centre too. Its back office offers young students and researchers the opportunity to study marine mammals, to help expanding the collection by studying and categorising the bones. Many of the bones need to be cleaned first, so outside the museum is a 'casa de huesos' or 'bone house' where the remaining meat is taken off the bones using rain water, knives and toothbrushes.

The restaurant on top of the hill did good business during the afternoon, and apparently was sold out of beer by the end of the day. Fortunately the original tea house was also open for the public. It is a very cosy and intimate place, with a warm stove and a view over the harbour. Attached to the tea-house are the private premises of Mafu's family. Natalie passed away 1.5 years ago, but Matthew's grandfather Tommy is still around and operates the radio sets to stay in touch with whoever contacts them. He is so adapted to this type of communication, that even when he Skypes with family he "rogers" you and ends his phrases with "over"!

The rest of us went ashore after lunch. For the first time in weeks we were walking on grass, smelling the flowers, hearing the wind through the trees, and for the first time in weeks, we could do that on our own. Everyone seems to unwind after our Antarctic adventure, some of us with a glass of wine or two or more. At the end of the afternoon when Lex picked up the last 'Europeans' spirits were running high. Fortunately by now, everyone is an expert in putting on life jackets and entering zodiacs, so everyone made it safely back to the ship. Back on board, the good mood continued and Laura's bar was taken over by some, and an impromptu-party was launched, with people dancing in the deckhouse and on the main deck. At some point things got a bit too loud and Klaas had to bring the volume down.

The family and guides from Harberton came over for dinner. Many chose to eat outside on deck in the relatively very warm evening. After the winners of the official Europa Photo Competition were announced, selected by Mafu, Gijs and Ewan.

After the competition was over, Wolfgang gave a speech, thanking the cooks, the captain and mate, the guides, and all the hard-working crew guys and girls. Not only did he have an envelope for the crew, but he had another one to support Benja's whaling project, a very nice gesture of appreciation indeed. Hopefully Benjamin will find a good cause for this donation, to enable further research into the lives of whales in Antarctica. After the official speech, Terje, our Norski, followed with a small improvisation, of which he could not remember the content later but nevertheless showing how much he had enjoyed the last weeks.

As the full moon rose and the music was brought to deck, the unwinding and celebration continued into the night. How nice it was to have this extra day, a day after the Drake and before Ushuaia, a day in between giving us a glimpse of Tierra del Fuego, a glimpse of Mafu's life and a deep breath after our sailing voyage to Antarctica. Tomorrow morning we will heave anchor and sail to Ushuaia. As the night turns completely dark and the last voyage crew finds their bunks, the remaining words of this trip log are written in the library.

Thank you for the journey!