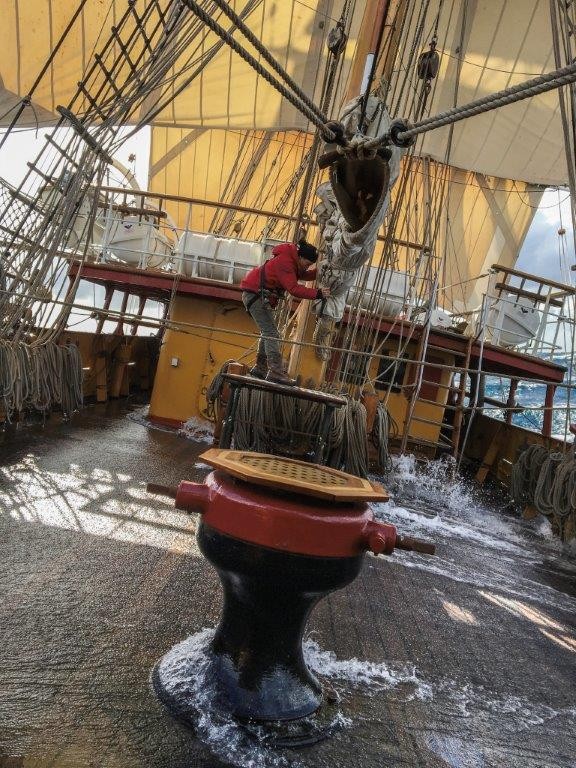 We keep running downwind on variable and shifting blows, maintaining a course to keep up with it, riding the swell that also comes from our back and the strong currents related with the main oceanographic feature of the area, the Agulhas current.

During the early morning the current that has been with us on our progress, seems to be changing its flow and run in not such a favourable way for our sailing. Until now, under similar wind conditions of 25kn on our back we were doing about 8kn of speed, but for a few hours before dawn we just can achieve about 5kn. We keep the same sail configuration, steering downwind on a 75º course, rolling while riding increasing swell, under all Square sails, Spanker, Inner and Outer Jibs. Courses are stretched with their whiskey poles, the rest of staysails are furled and just these couple of well sheeted Jibs are set.

Nevertheless, the steering keeps being difficult during the whole journey. As she runs downwind surfing the swell, its easy to run off-course and permanent crew is assigned next to us assisting at the wheel.

A couple of gybes were necessary, starting before sunrise, then again during the morning, trying to keep up with the winds shifting a few degrees now and then and routing the best possible way not to fall into head currents. Not an easy task as the area is well known for its treacherous and complicated current patterns.

Mate or Captain take the wheel while many are busy bracing a bit, changing whisker pole on the Main Sail from one side to the other and passing Spanker and head rig to the new tack.

Luckily, despite the water running over the decks quite often, from the daybreak the sun shines between the clouds, just shortly shadowed in a few of occasions by small squalls passing by. As they appear like dark clouds approaching us, the precaution is to strike the Royals in advance and remain on standby. But being just short blows, soon are set again every time.

As the day advances, the wind blows from a SW-ly direction, veering to W-ly in the evening and still strong at 25 to 30kn. But the current changed and now seem to run on a favourable direction, as our speed increase again to about 8kn, and will keep like this or even faster till the end of the day. The changing current speeds are related features of the large Agulhas Current.

This warm, narrow and fast current flows down the East coast of Africa from from 27°S to 40°S, reaching the southern tip of the continent and interacting there with the mains currents of the West Wind Drift, flowing Eastwards along the South Atlantic and the upwelling cold water of the Northwards flowing Benguela Current.

But what makes the Agulhas current special is its behaviour when those three water masses interact, as the larger amount of its water turn back on itself close to Cape of Good Hope, rejoining again the general circulation of the Indian Ocean. An estimated flux of 12.000 cubic kilometre per day (equivalent to about 1400 times that of the Amazon River), moves at a rate of 150 km/day, turning around in a loop with a diameter of about only 400 km to flow directly in the opposite direction. This process does not happen along a clean edge o twist, but in a turbulent mixing flow along the retroflection loop. When periodically it pinches off on itself, releases warm water eddies into the colder South Atlantic Gyre. This process has a major effect on South Atlantic and Southern Indian Ocean dynamics, marine productivity and weather patterns, allowing warm tropical and subtropical surface water to remain in the region for a considerably longer time than in comparable western boundary currents. Increasing the flux of heat and moisture to the atmosphere.

Those gyres have an effect on the water surface, waves patterns and local currents, all factors to be considered by the ships in the area and their navigators. Luckily, as with the weather, nowadays satellite observations exist that can keep track and forecast their movements. Those current charts, of course together with the wind forecasts, are of invaluable help to do a proper routing when sailing along the South Atlantic to South Africa.

The speed of the surface water on those gyres and eddies released in the South Atlantic can dramatically affect the progress of any ship dealing with them. Fortunately, our Captain and Mate have all this information and their route planning is driving us to Cape Town on fair winds and favourable currents.

After everything tough, unavoidable are the squalls and sudden wind shifts that last just a short time, making the Captain to take the wheel to deal with them, avoiding accidental gybing or all sails falling aback.

Under those conditions, from last noon and in 24 hours we have sailed 156nm. Far behind us, now at 1222nm lyes Tristan da Cunha, but now our eyes are fixed ahead, on the couple of days left for our arrival to Cape Town. Riding our way there, today we are joined by a large group of Common dolphins, that for a while are eager to bowride the ship. Being very active and fast, make for an enjoyable sight but a difficult subject to photograph. They belong to the Genus Delphinus, which is characterised for showing substantial regional differences in size, shape, structure and colour pattern. Several variations are recognised, but officially two species are described (short and long beaked). On the waters we are sailing now close to the continental shelf of South Africa, is the latter one that can be found. Their distribution range comprises coastal waters around the African west coast, California, northern Chile and Venezuela to Rio de kea Plata in the Atlantic waters of South America. The equatorial waters of the Indian Ocean are home for different form called tropicals.